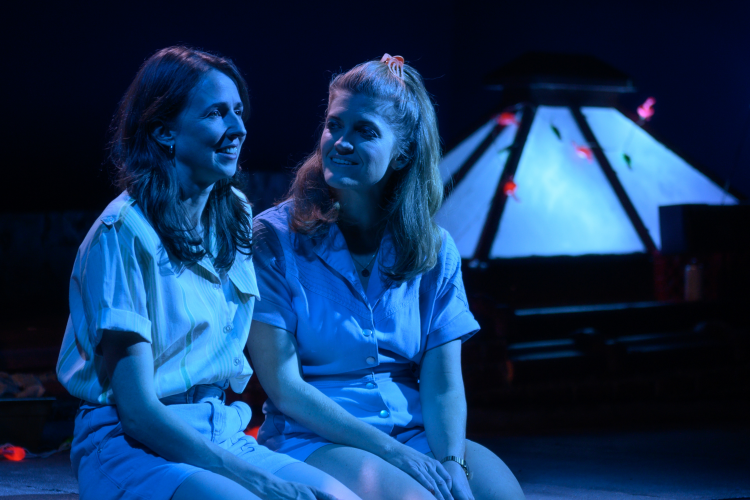 BOTTOM LINE: Dr. Ride's American Beach House seems uneventful, but it slowly sneaks up on and stays with you, especially Kristen Sieh's performance.

Not a lot seems to happen in Dr. Ride's American Beach House. On the evening before Sally Ride's historic space flight, two best friends (then later, a third woman) sit on a St. Louis rooftop listening to the radio. But it's a play that sneaks up on you, lingering long after the lights come up. Even days later I find myself going back to certain scenes. While set at a very specific moment in time, the feelings of being unsatisfied with life are universal.

Harriet (Kristen Sieh) and Matilda (Erin Markey) meet on the roof for the Two Serious Ladies Book Club (the name is a reference to the novel by Jane Bowles). They went to graduate school together for poetry, but neither has done much with their degree. Matilda has a husband and sick kid at home. Harriet has a boyfriend, although he seems unimportant to her—she keeps returning to a story about a man she met when visiting her mom in hospice in Florida. Liza Birkenmeier's writing and Kristen Sieh's endlessly watchable performance make for a perfect combination during these early scenes. Sieh hooks us on her every word as she describes what it is like to have power that has always eluded you.

When Meg (Marga Gomez), a nurse friend of Matilda's and an out lesbian, shows up, it becomes apparent that there might be more to the relationship between Harriet and Matilda. Again, these moments are subtle, and easy to miss at first.

There is also a fourth character—Norma, the landlord. Though Susan Blommaert is as good as the rest of the cast (and they are all excellent), Norma as a character is pretty unnecessary; her few scenes slow down what little action there is. Still, Katie Brook's direction is as quietly brilliant as the writing. Every conversation feels spontaneous.

If you're going to see Dr. Ride's American Beach House to learn more about the first American woman in space, be warned that very little of it has to do with Ride until the sweetly surprising ending. To say more would be giving away the discoveries that make the play worth the ride.

(Dr. Ride's American Beach House plays at Greenwich House, 27 Barrow Street, through November 23, 2019. The running time is 100 minutes with no intermission. Performances are Mondays through Wednesdays at 7; Thursdays and Fridays at 8; and Saturdays at 3 and 8. Tickets are $35 and $65. For tickets and more information visit arsnovanyc.com.)