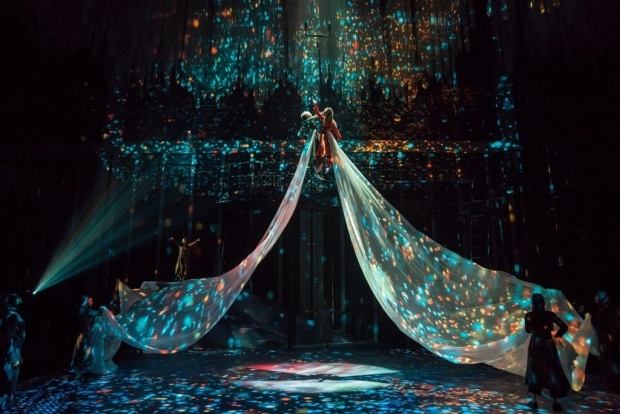 BOTTOM LINE: While clearly a lot of money was spent on this piece commissioned by The Shed, Dragon Spring Phoenix Rise underscores how no budget will make up for the lack of a good story.

Dragon Spring Phoenix Rise tries to do many things. A so-called “kung-fu musical,” it’s a piece that is part family drama, part mythic creation, part experimental theatre, part martial arts demonstration, and part circus spectacle. It’s a show created by the renowned Chen Shi-Zheng, in collaboration with writers Jonathan Aibel and Glenn Berger (of the Kung Fu Panda), with music (not enough) by Sia. But as I sat trying to puzzle through this somewhat confusing work, the thing I kept coming back to was this: although both set and performed in New York City, Dragon Spring Phoenix Rise doesn’t seem to be designed for U.S. audiences, and clearly isn’t working out of American theatrical traditions. And I suspect it’s this—what might perhaps be loosely described as a problem with translation—that is at least partly responsible for the drubbing it has received by the New York critical establishment.

Most of the critique concerns the main narrative, one that is told with all the sign-posting and broad strokes of a classic myth. In brief, there is a “House of Dragon” in Flushing, Queens (a location that seems random until you realize Flushing is home to the second largest Chinatown in New York City). This group, led by kung fu master Lone Peak (David Patrick Kelly), protects a spring of the sort that extends life or perhaps provides eternal life (it clearly does something good with life). Lone Peak’s daughter Little Lotus (Jasmine Chiu, and later Peiju Chien-Pott) falls in with Doug Pince (David Torok), they have twins, and then for some reason Doug Pince rebels and tries to steal control of the spring. So the twins each grow up with a different parent, each thinking the other is dead, and that the other parent has betrayed them. All the seeds for a classic tale of family honor and betrayal are here; unfortunately, the story is told without the deeper development that’s required when you are attempting to create a new legend from scratch.

See, without any underlying mythology, a line like “Phoenix and Dragon will unite and we will all be free” just becomes gibberish. Free of what? Who are Dragon and Phoenix? What is this spring that this house is protecting? And why would a father—not one in a distant time and a distant land, but one who pushes baby carriages in contemporary New York City—decide that this spring is so valuable that he should kill one of his kids to get it? Classic myths allow us to circumvent such questions because we have a rich, centuries-old foundation to draw from, so we can fill in the holes ourselves. But if creators Chen, Aibel, and Berger want to create a new myth—at least one staged in front of a New York theatre audience that is trained in psychological realism—there needs to be more backstory, more that is filled in. Instead, all we get is a series of loosely connected scenes, along with dialogue that is either frustratingly obtuse in its attempts at poeticism, or else ripped from a second-rate Americanized kung fu flick (as Little Lotus and Doug Pince begin the requisite fight scene late in act 2, one says “Come on honey, let’s not fight in front of the kids”).

Another problem is that the cavernous space of the Shed seems to make quick transitions difficult, if not impossible. The pacing is reminiscent of a Cirque du Soleil show, where scenes just sort of peter out, and then we gradually move on to the next. It’s a story told episodically, leaving little room not just for complex character development, but for short scenes that move the narrative without bogging things down. Clearly the first is not Chen’s aim—Dragon Spring Phoenix Rise is clearly intended to be far more myth than Arthur Miller. But it also means that when the action moves to the club where Little Lotus and Doug Pince first meet (there is a lot of meeting in dance clubs, ironic considering such establishments have all-but vanished from NYC life—perhaps another attempt at myth creation?) we don’t just see the couple meet and move on. Instead, we get an elaborate dance scene featuring club-goers who otherwise have no relevance to the story whatsoever. It’s a style of pacing and storytelling that has far more in common with Chinese opera and other non-U.S. theatrical traditions, but in this context, it just adds to the head-scratching.

Not that there aren’t some showy moments. There is a fair amount of kung fu fighting and movement, if you’re into that kind of thing. But while it’s clear everyone trained a lot for these sequences, they fall flat. Whereas film allows such fighting to seem immediate and visceral, the requirements of live performance make the action distant, more obviously choreographed, something that isn’t helped by the dim lighting and cavernous space. And certainly actors fly in and out of the space, most notably at the end of each act. But flying actors in and out is all but de rigeuer for a big-budget spectacle.

To my mind the best moment is also the one that is perhaps a bit too understated. Near the end of Act 1, Little Lotus, having been hurt (or killed?) is being healed (or brought back to life?) by the spring. As she lays on the stage, the ensemble dances around her in the dim lighting, and gradually, they seem to be splashing through water. For awhile I thought this was all a clever lighting and sound effect—but no, the closer I looked, this was real water bubbling up around (dead?) Little Lotus, the source of this spring remaining hidden and mysterious long after the intermission lights went up. It’s one of the more impressive stage effects I’ve seen in some time, but it’s also one that doesn’t announce itself—it’s quiet, unobtrusive, almost demure. There is a part of me that respects such subtlety; it’s refreshing to see a stage effect that doesn’t proclaim “look at how amazing I am!” Had I been more invested in the story and characters by this point, it’s a moment that could easily have stood out as a delightful contrast to garish American spectacle. Instead, this spring, as magical as it might be, is too little, too late.

(Dragon Spring Phoenix Rise plays at The Shed, 545 West 30th Street, through July 27, 2019. The running time is approximately 1 hour 45 minutes, with one intermission. Performances are Tuesdays thorugh Fridays at 8, Saturdays at 2 and 8, and Sundays at 3. Tickets are $25 - $99, and are available at theshed.org.)