Adapted and Directed by Erica Schmidt; Based on Cyrano de Bergerac by Edmond Rostand
Music by Aaron Dessner and Bryce Dessner; Lyrics by Matt Berninger and Carin Besser
Produced by The New Group 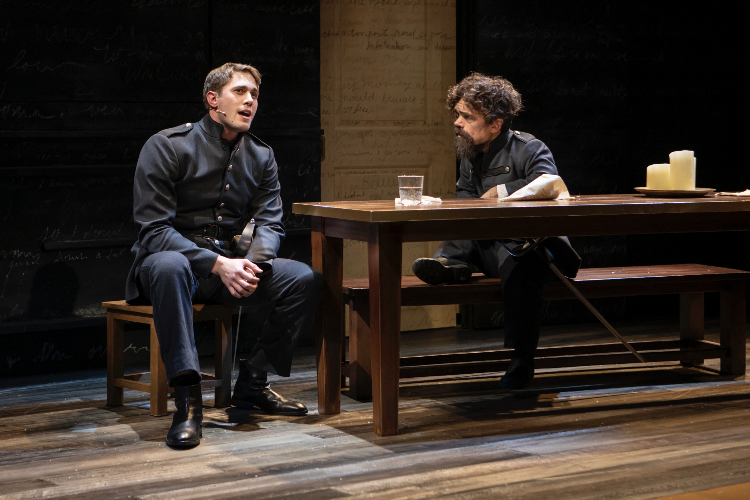 BOTTOM LINE: A disappointing adaption of Cyrano never shows the beauty this play can have.

No one has handwritten a letter on paper in years. Despite this, Cyrano proves surprisingly relevant in 2019. Every day we craft our image behind Instagram filters, managing to forget what it’s like to be a real person, someone who willingly flirts, and fails, along the way. Beauty equals followers but rarely substance. Here, in Erica Schmidt’s adaptation of Rostand's romance play, these ideas have new life with a classical story.

Cyrano (Peter Dinklage) is in love with Roxanne (Jasmine Cephas Jones), but because of his unusually large nose, he is never considered for a lover. Instead, Roxanne wants Cyrano to introduce her to the handsome Christian (Blake Jenner). Christian is inept in the wooing department; Cyrano sets out to help him by writing love letters to which Christian can sign his name . This rather improbable scenario escalates into a series of even more improbable moments, continuing for years as Cyrano and Christian go off to war while sending letters home to Roxanne.

Our characters curate their own sadness. Truly, this could all have been done with in one mildly awkward conversation followed by a healthy moving on, but the story is kept going through poetry—initially Rostand's and now Schmidt's. On paper, her collaboration with the melancholy, implausible, poetic rock band The National makes sense. But I’m afraid that spark of an idea has not worked.

The music, which features an initial song that lurches in, suggesting that we must have missed a first scene that happened just off stage, and lingers all the way through to when you finally exit the theater, is a monotonous string with absurd lyrics rhyming things like “overcome” and “run.” For a play that celebrates the beauty of wooing through meticulously crafted words, both Cyrano’s book and lyrics never leave the realm of cue lines. Every word seems like the set up to a song in a jukebox musical—woefully melodramatic and devoid of nuance.

This Cyrano could have worked as a concept album or even an elaborate concert; as theater, it sags as it is increasingly reduced to the absurd. Erica Schmidt has staged her own adaptation on a narrow, simple stage (design by Christine Jones and Amy Rubin) in a picturesque way that initially suggests this Cyrano will be something less play-like and more concert-like. But sadly, that isn’t the choice she makes. For mere moments, Dinklage drops into a lovely thirty seconds of a performance, until he’s handed something tedious to sing. It’s a letdown for both the play it is trying to be and the concert that it wishes it were.

Leaning further into the musical theater territory (where Cyrano has no business being), Jeff and Rick Kuperman have choreographed a series of slow-motion mise-en-scènes where flour flies, soil for planting flower bulbs is tossed about, and bullets whirl in battle. What is initially neat gets more and more repetitive, until it becomes silly enough to make me laugh, like Mary Tyler Moore at a funeral.

And then there’s Peter Dinklage—no doubt the reason for the high prices (and near-sold-out houses). At first you’re like “Oh, wow! Peter Dinklage!” But as the piece goes on, that turns into “Oh no, poor Peter Dinklage.” It all begins to seem like some elaborate plot to destroy his massive, post-Game of Thrones star power, almost as if he’s intentionally taking a match to it all. All we can do is watch with sadistic horror. And damnit, he sure would make a great Cyrano in, you know, an actual production of Rostand's play.

For that matter, there’s a ton of star power on that stage. From a massively underused Grace McLean in a series of inane parts, to a return of Jasmine Cephas Jones (original cast of Hamilton) to the stage—despite not having songs written in a way that suits her voice, to the brand-new score from the Grammy-winning team behind The National, it really all should work. But much like the implausibility of its own story, it doesn’t. The New Group's Cyrano has the same imposter syndrome as Christian—and seems like it could have been written by him too.