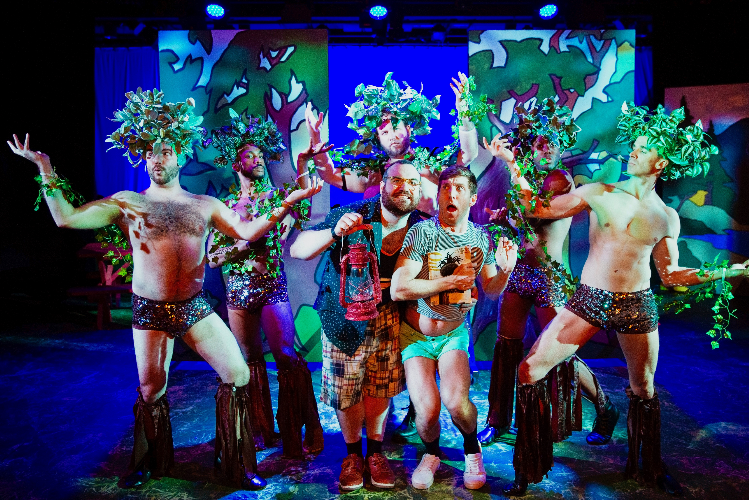 BOTTOM LINE: Just in time for Pride, this new musical manages to have both a ton of naked men AND a plot, not to mention an important message about celebrating one’s body, no matter the size.

Oh, how the gays love their pound (or more) of flesh. It's a well-known trope that any self-respecting gay play will have its share of eye candy, something that certain pieces—like the long-running musical revue Naked Boys Singing (yes, it’s still running!)—use as their raison d’être. The new musical Camp Morning Wood is meant to be Naked Boys Singing with a plot. But if you’re expecting a deep dive into the contemporary gay milieu, well, read that title again. Camp Morning Wood is just about exactly what you’d expect—silly, hackneyed, full of camp (but not powerhouse singers), yet also a reminder of the joy to be found in returning to one’s, um, “natural” state.

Gabe (Tim Garnham) and Randy (Alex Gagné) are heading away for the weekend when a tire blows; true to stereotype, they can’t fix it. Taking refuge in a nearby empty cabin (because of course), they soon discover they’ve unwittingly entered Camp Morning Wood, a “clothing optional” camp (clearly modeled after The Woods), led by Jacques (Brady Vigness), who explains this is the last weekend before the camp is being destroyed. (Jacques is French—beret-wearing, spat-sporting French—solely so he can sing about “oui ouis.” And if you think Vigness’s accent is a bit uneven, well, that’s eventually explained too). It seems evil Republican Senator Dick Snatch (Courtney Dease) wants the land for a new mega-church, and has gotten into bed with Big WTF Oil to take over the mountain.

Jay Falzone’s book won’t win any awards, but it does what it needs to, setting up a whole bunch of questions with resolutions you can see coming from across the lake—Will Gabe learn to appreciate nature? Will Randy finally take off his clothes? Will the Senator come out? Will the camp be saved? Will Kincaid accept others? (ok, don’t hold your breath for that last one). Falzone works in some great one-liners (“I haven’t been this sad since Sponge Bob lost the Tony to Monk”). But sometimes the jokes outweigh the pacing. Cutting a few small scenes (like a random yoga lesson) would allow Camp Morning Wood to be the 90-minute, intermission-less show it wants to be.

Strikingly, while Randy frets over threesomes with his fiancée, it isn’t for the reason you might think. Where most gay theatre is mired in debating the “morality” of non-monogamous relationships, Camp Morning Wood explores the body issues that come up when faced with getting into bed with someone new. Randy, a professor of Colonial Queer Studies (yes, it’s a thing), is getting older, his body saggier; as we come to find out, this is why he has been pulling away from Gabe after their recent threesome. It's a refreshing change in the standard narrative. And best of all, the production certainly practices what it preaches—while the cast isn’t full of Broadway-caliber voices, director Marc Eardley did an excellent job at casting men of many different sizes (and yes, I mean that in multiple ways).

The music, composed by five different people, spans the gamut from sufficient to catchy, although it’s Jay Falzone’s entendre-filled lyrics that often draw the focus. Composer Matt Gumley writes some decent character-driven solos (Randy’s “Losing the Race” and Gabe’s “Alone with My Phone”), as well as the show’s one counterpoint duet (“Tainted Love / Don’t Be a Dick”) and the aforementioned “Oui Oui” number. Derrick Byers does well with the gay-related ensemble numbers, including “Beware of Bears” (which addresses the full gay menagerie), “A BBC’s Lament” (as sung by Titus, a black man, “BBC” needs no explanation), and the Senator’s “Ballad of the Righteous,” (lest the title fool you, it’s a song about the virtues and pleasures to be found when you “fill your hole”). But best of all are the songs by Bobby Cronin. The recurring theme song “Rise and Shine!” will stick in your head for days, and the finale “Bare It All” does a great job in musically expressing the show’s message—it’s joyful, inspiring, and—like any good closing number—will make you forgive (or at least forget) all sorts of previous imperfections.

Clearly the main draw is meant to be the nudity—often to a fault. Design-wise, Camp Morning Wood is festival-level at best, with simple painted flats and minimal props. And Izzy Fields’s costume design (yes, even a naked show needs costumes) is about as silly as the show—often a good thing, but still clearly done on a budget. Sure, this is a show where even the tree stumps have glitter, but given that this isn’t a festival production with reduced tech capabilities, I wish more effort had been spent making this show look more professional.

The preview I attended had some significant tech issues, but even aside from that, the sound and lighting design leave a lot to be desired. And because the team went with pre-recorded instrumental tracks over live musicians, any delay in sound cues leaves the cast waiting a beat to come in (thankfully, some cast members—especially Tim Garnham—are adept at ad-libbing). Eardley’s direction doesn’t help here either—the pacing sometimes drags, some actors seem unsure of their steps or lines, and certain laugh lines are curiously obscured (if you’re going to joke about the size of a man’s “talent” in a show where everyone is naked all the time, don’t have that be the one scene where he’s wearing an apron).

As for the cast, some are better than others. No doubt, requiring everyone to get fully naked significantly decreases the pool of willing actors; that Eardley managed to find a diverse cast of ten (including more than one person of color) is a feat in itself. As Randy, Alex Gagné does a solid “every gay” to whom many in the audience will likely relate. Michael Witkes excels with the “too hot for you” attitude of Kincaid; thanks in large part to his performance, Kincaid is instantly recognizable to anyone who had ever set foot into a gay bar. Among the ensemble members, the talented Sean Stephens “stands out” as Derek, the camper who first sings about “morning wood.” And Anthony Logan Cole portrays the big bear Hunter as the most confident man onstage, epitomizing in a single performance the show’s overarching message. But best of all are Tim Garnham and Courtney Dease. Garnham plays Gabe as super camp, deftly setting the light-hearted tone from the very beginning, while also possessing one of the best voices in the show. And as the Senator, Dease is outstanding, saying each dirty pun with the perfect amount of cluelessness while also turning what could be just one more “hee hee sex joke” ensemble number into a rousing, show-stopping reminder that provides a glimpse of what this show could be.

Camp Morning Wood is silly and more than a little rough around the edges. Were it a festival production, it’d be terrific; at Off Broadway prices, those who want more than just nudity might leave unfulfilled. Yet as cheesy as the musical is, its sorely needed message of gay male body positivity takes on special weight when voiced by a group of cheerful naked men. If you’re a nudist, Camp Morning Wood may not tell you anything you didn’t already know (although you can check it out in your preferred state on the special “all-naked” nights). But for those for whom clothing is never “optional,” Camp Morning Wood offers a glimpse into a world you might otherwise never get to experience.

(Camp Morning Wood: A Very Naked Musical plays at the Peter Jay Sharp Theater, 416 West 42nd Street, through July 7, 2019. The running time is 2 hours with an intermission. Performances are Wednesdays through Fridays at 7:30, Saturdays at 5:30 and 10, and Sundays at 1 and 5:30. The performances on 6/20 and 6/27 are all naked (audience too). Tickets are $39 - $99 and can be purchased at TicketCentral.com or by calling 212-279-4200. For more information, visit CampMorningWoodTheMusical.com. For more information about the all-naked audience performances, visit Go Naked, New York's premier men's nudie group, at GoNaked.co.)