Book and Lyrics By Ellen Fitzhugh and Harrison David Rivers;
Music and Additional Lyrics by Ted Shen; Directed by Jack Cummings III
Produced by Transport Group in association with The Public Theater 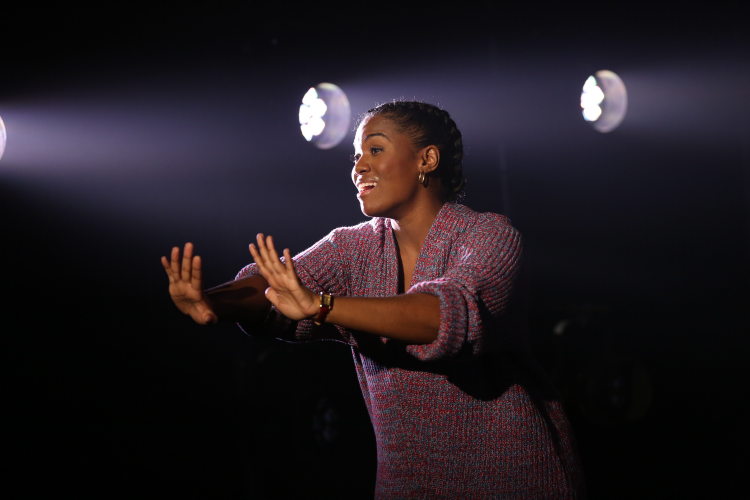 BOTTOM LINE: The main reason to see Broadbend, Arkansas is the two powerhouse performances from Justin Cunningham and Danyel Fulton.

A few minutes into Broadbend, Arkansas, I started to feel déjà vu. That's when I realized I had already seen the first of these two one-act musicals. Though Broadbend, Arkansas is billed as a world premiere, the first act, "Just One Q," was part of Inner Voices in 2016. I found it somewhat forgettable then, but at least now it's been expanded and improved by pairing it with "Ruby."

"Just One Q" takes place at a nursing home in 1961. Narrated by Benny (Justin Cunningham), an incredibly patient orderly, it begins with a Scrabble game between Benny's boss Julynne, and Bertha, one of the residents of the nursing home she runs. (In Benny's role as narrator, Cunningham deftly and clearly plays both women, assisted by Jen Schriever's lighting and a few chairs, where each of the two women is placed.) It doesn't get interesting until the second half, when Benny decides he needs to join the Freedom Riders (well, tentatively—by following their bus in his car). It's too bad that librettist Ellen Fitzhugh focuses more on bickering white women than Benny's journey with the Civil Rights Movement, but Cunningham's voice is so strong that whatever he sings is worth hearing.

The second act, "Ruby," is by Harrison David River, and the writing is tighter than in act one. "Ruby" takes place in 1988 and focuses on Ruby, one of Benny's twin daughters, whose son is in the hospital after an incident with the police, events which brings back memories of her father's death. It's a much more engaging story, but sometimes heavy-handed. Again, the highlight is the singing, this time from Danyel Fulton, whose performance is so moving that it elevates the material.

Ted Shen's music (for both parts) does not sound very distinctive—there aren't really traditional songs per se, but more a continuous musicalization of text. The effect is less a traditional musical, and more a sung-through play. But there is no doubt that these are the types of stories worth telling and the kinds of faces we need more of. We should at the very least be seeing both Cunningham and Fulton in more musicals.

The cast is Justin Cunningham and Danyel Fulton.