Off Broadway, Musical
Runs through 11.23.19
Dixon Place, 161A Christie Street 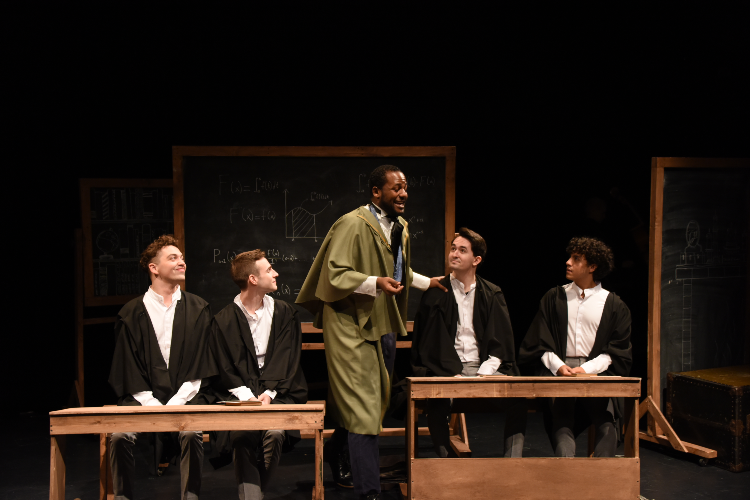 The all-boys school is home for classmates Regy (Jack Saleeby), Chat (Trevor Carr), Elliot (Justin Glass) and Beak (Justin Chevalier) under the guidance of their professor and housemaster, William Johnson Cory, affectionately referred to as Tute (Joshua William Green). Although the repressive world outside threatens to intrude, Regy and Chat, who meet on the first day of school, experience blossoming first love as they enter their final year at Eton.

It’s a blissful autumn of learning—with the induction of wide-eyed Beak into their group, letters written and exchanged, and tender embraces in the moonlight—all recounted by Regy as he writes in his diary about Chat. Their parents seem to have little involvement in their lives, especially for Regy (“the family’s precious heir,” according to Chat), but the stakes are much higher for Chat, who would be cast out of his family if they knew the truth.

Their lives and the romance are disrupted by the arrival of a new headmaster, the rigid and homophobic Hornby (Christopher Dippel), who is also Chat’s Godfather. He catches Regy and Chat in a moment of closeness and asks Tute if he has seen anything “unbecoming” between them. Tute brushes off his concerns, arousing Hornby’s suspicions about Tute and how the school is being run. Hornby blackmails Chat, telling him that he will go to Chat’s father about Regy unless Chat helps clean up the school. Hornby even tries to force Chat to go on a date with Eleanor (Taylor Rae Almonte), a respectable woman. Hornby’s actions create a lasting ripple effect, leaving the boys and Tute casualties in his wake.

The real Johnson was a long-time teacher, reformer, and assistant master, praised by the likes of Arthur Coleridge, and under whom various Lords and Viscounts had studied. The real Hornby wanted to rid Eton of liberal educators like Johnson and was aided in his endeavor by a letter Johnson wrote to a student that became public. Johnson was seen as fostering an atmosphere of intimacy (possibly innocent) between students, and his forced resignation created a scandal at Eton in 1872. Brett, who had been one of Johnson’s students and became a “fixer” in Queen Victoria’s government, later wrote a book devoted to his teacher.

Given that this musical has such terrific singers and harmonizers, it’s unfortunate that the lyrics are repeatedly drowned out by the onstage musicians. But otherwise, everyone sounds great. There are also a couple of awkward transitions, especially a glaring one at the end of the first act. But the actors are all very winning, in particular Saleeby, who brings a great deal of heart to Regy, and Chevalier, whose Beak adds welcome notes of sweetness and humor as the heavier story plays out. And two of my favorite songs—“Path of Your Life” and the opener “Bright and Brave”—have stayed with me since.

It’s a shame that the show has only a handful of performances. With a little polishing, it could enjoy a long run; hopefully it will get the chance.