By Julie Gieseke, in collaboration with Nina Wise; Directed by Nina Wise
Part of the 2019 FRIGID New York Festival 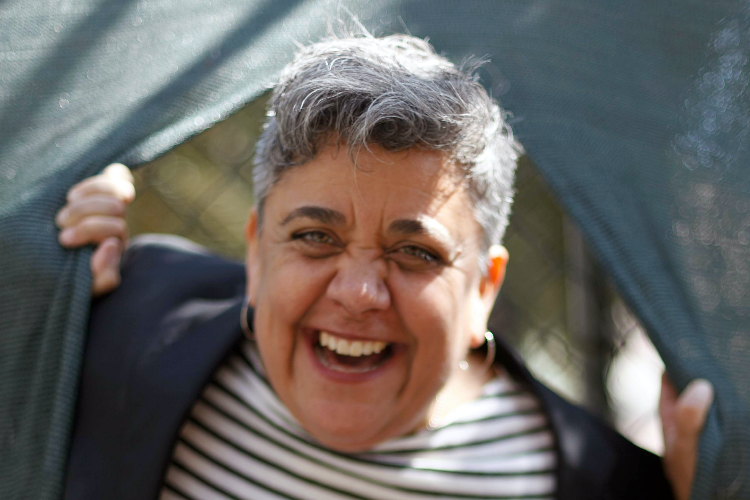 BOTTOM LINE: Julie Gieseke excavates past emotional traumas to create material that is both humorous and deeply touching.

The saying “Laughter can be the best medicine” certainly proves true in Julie Gieseke’s Borderline A**hole. The piece begins with Gieseke, during a long stretch of singledom, meeting Monica, an eccentric artist with whom she has a series of dates. But are they dates? Or is Monica straight? Finding herself thinking more about Monica than the women she might meet through the dating service she just joined, Julie gains some courage and pushes the sexuality issue. Monica's answer—she's "an artist," and their relationship starts off with a bang.

Monica seems like a dream partner from the start and proves indispensable as Julie’s mother is dying. However, there is one snag—Monica keeps insisting that Julie has Borderline Personality Disorder. True, Julie does have a short temper, but Monica is quick to push an entire diagnosis upon her, blaming her for all of their relationship problems. In an effort to save her relationship, Julie spends thousands of dollars on a BPD therapy group, but eventually she has to wonder if she is really the one with the problem.

As a performer, Gieseke is extremely enigmatic, particularly when finding humor in her own self-deprecation. With a writer’s eye she finds the right details to focus on to develop characters and elicit laughter. Because Gieseke is more a storyteller than veteran of the theater world, there is an immense genuineness at the heart of Borderline A**hole. Gieseke bares her true self and emotions, rather than letting them become eclipsed by the bravado and showmanship found in some solo pieces. Her warmth and sincerity give you the sense that you are being told a story by a close friend, rather than by a stranger in a darkened theater.

With a bare bones set Gieseke sucks us into her immensely compelling narrative, enabling us to experience her emotional ups and downs. If you see only one show in this year’s Frigid Festival, Borderline A**hole is a great choice, one that is sure to make you laugh as you contemplate your own failed relationships and past losses. I hope to see Gieseke on stage again, whether with this story or something new.