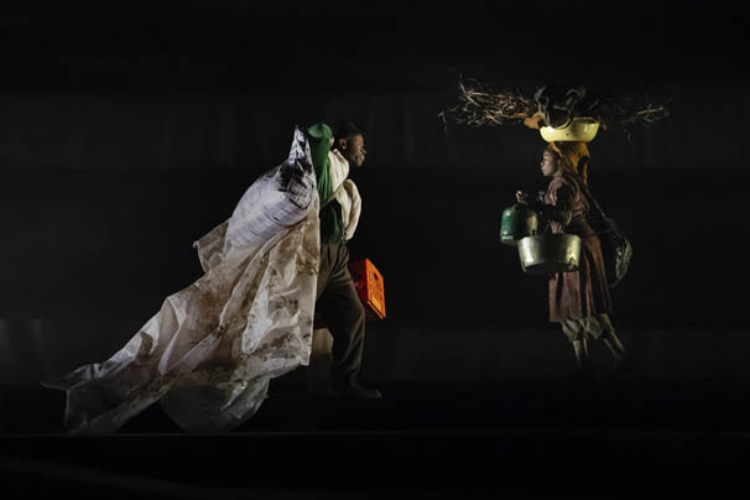 Sahr Ngaujah and Zainab Jah in Boesman and Lena. Photo by Joan Marcus.

BOTTOM LINE: A timeless and nuanced look at the need for compassion through the lens of apartheid in South Africa, and how something is always better than nothing.

These days, the grit and dirt of human life is on display anywhere you look. Humanity continues to suffer, with stories on the daily news of the oppressed, the marginalized, and the homeless. Athol Fugard’s Boesman and Lena, currently playing at Signature Theatre, is a timeless look at the journey of two humans searching for something—because something, anything at this point, would be “better than nothing.”

Set in the swartkops, or mudflats, the play centers on title characters Boesman (Sahr Ngaujah) and Lena (Zainab Jah), stuck in the vicious circle of apartheid in South Africa during the 1960s. Having just been forced out of their shantytown by white authorities for what could have been the third or hundredth time, they are on a journey by foot to find a new home. Landing in the mudflats of the river, Lena desperately tries to recall the route that brought them to this godforsaken land again. Is this the first time they’ve been here? The fourth? Or was this walk a previous one?

The action begins with Lena and Boesman carrying all their worldly possessions on their heads. Reduced to an almost feral state, these nominal partners lack all the markers of modern life and love. Lena, frequently beaten by Boesman, is hunched over, aching for some sense of comfort. Constantly talking and singing, she tries to make sense of the dull, disengaging pattern of her life. The fiercer Boesman is an embodiment of fear and frustration boiling under the surface, but fated to burst. As they set up camp in the swamp and begin to create what will be their home until the white man inevitably comes to remove them again, the tension between them is palpable. When an old stranger (Thomas Silcott) stumbles upon their camp in the middle of the night, Lena finally puts her foot down with Boesman and demands he be allowed to stay. He doesn’t speak their language, but Lena finds him to be a fast friend.

Suspended in time and space, Boesman and Lena confront their adversarial relationship and the cryptic, cyclical nature of their journey. In a nuanced and heartbreaking performance, Jah’s Lena grows in unexpected ways over the course of the play, firmly holding her ground as unexpected threats continue to arise. Boesman, keeping his cards close to his chest at the beginning, later lets it all fly in a tear-jerking altercation. Ngaujah delivers a complex performance that depicts Boesman's need to feel in control, a need to feel human in relationships that everyone can relate to.

Signature Theatre’s production of this enduring drama, written in 1969, resonates deeply on an intellectual and emotional level; the play's central pair can be everyone and no one. Empathetically directed by Yaël Farber, it is an unrelenting two hours of stunning imagery and cyclical dialogue. Moving about an empty stage featuring a single tree, Jah, Ngaujah, and Silcott are trapped in a sleek box designed by Susan Hilferty. Lighting by Amith Chandrashaker beautifies their plight, shaping the actors in such a way you almost expect them to break into a dance (and they almost do). With the timeless costumes (also by Hilferty) and an ethereal soundscape by Matt Hubbs, you can’t help but notice the parallels between this play and every recent story of homelessness and the plight of refugees on the news. It may be South Africa in the '60s onstage, but this struggle is still alive and well on the sidewalk outside the theatre.

The cast is Zainab Jah, Sahr Ngaujah, and Thomas Silcott.