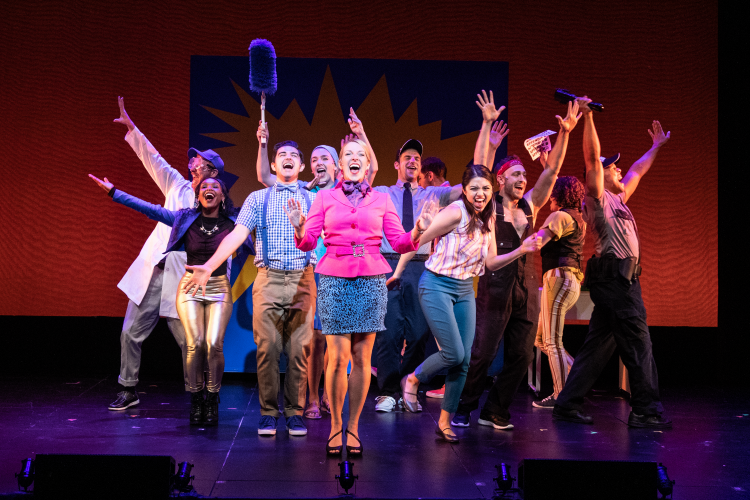 Wide-eyed and eager, uber-geek Raymond (Jonathan Miller), along with a bunch of newly hired engineer-inventors, is keen to start work at the country's largest corporation, Worldwide Universal Holdings. To their surprise, oil CEO Dean (Broadway veteran Sean McDermott) makes new employees sign contracts that will allow him to capture and warehouse their renewable energy inventions in order to eliminate Dean's competition. This includes Raymond's eccentric latest invention—a black-hole trash compactor that sucks both clothes and golf clubs. Black Hole Wedding is a hilarious, roller-coaster ride that pokes fun at the tension between trusting graduates and the technology corporations that take advantage of their talent and innovation.

Composer Paul Nelson has a double life as a scientist and engineer, and clearly understands the workings of patents within corporate America. Nelson, along with collaborator Katherine Brann Fredricks, spins out a satirical musical with plenty of musical variety and Fredricks' memorable lyrics, especially in Dean's hunky, golf-loving, winner-take-all songs. The result is a fun-filled journey, especially under the clever stage direction of Craig J. George.

Whether in the zany yet loving scene where Dean's in-house masseur Summer (Mimi Robinson) channels cosmic energy to sooth Raymond's tensions, or when Calista (Mandy Striph), the charming, effervescent marketing head, performs a "lap-dance" with pom poms to get something from Raymond, there is humor at every corner. I also enjoyed Eugene (Jay Ellis), the head of securities with #MeToo issues. But the most entertaining and original bits are where an actor dressed in black pulls (or sucks) objects and people into the black-hole trash compactor. I recommend this light-hearted but pertinent show to all ages, including families and those on date nights.