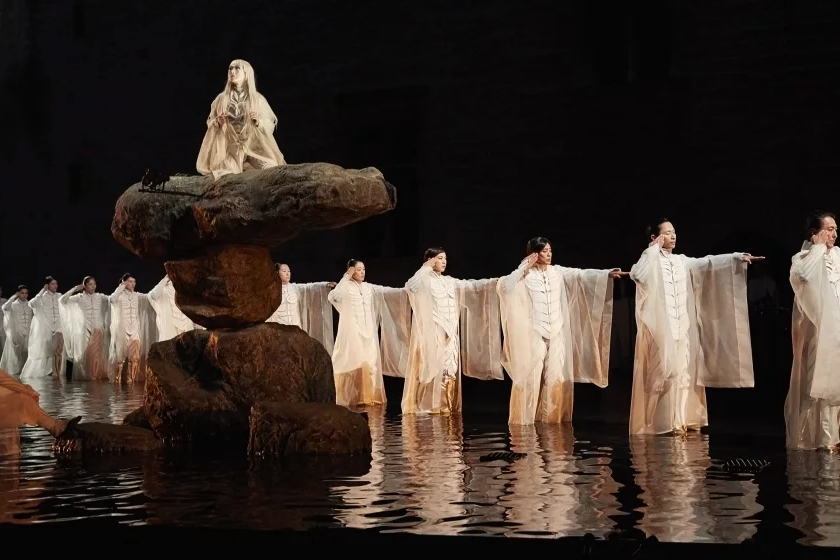 The cast of Antigone. Photo by Christophe Raynaud de Lage.

BOTTOM LINE: The Ancient Greek drama, seen through the prisms of Japanese and Indonesian traditions, captivates with its universal timeliness and theatrical magic.

The grandiose, 55,000-square foot Drill Hall of the Park Avenue Armory seems a perfect space to host Antigone, directed by Satoshi Miyagi for the Shizuoka Performing Arts Center. The stellar design by Junpei Kiz features an 18,000-gallon pool of water in lieu of a stage, where 29 performers glide ankle-deep, dressed in white garments suggesting futuristic kimonos or superheroes’ attire. This is the first image one sees when taking a seat before the show begins; the quiet splashes of black water have a tranquilizing effect. In fact, I suspect I was hypnotized and spent the intermission-less 105 minutes drifting in the subconscious of world theatre.

This Antigone is performed in Japanese (with English supertitles). But don’t worry if you have trouble following or don’t remember all the twists of Sophocle’s tragedy: there is a playful and unexpectedly comedic prologue in English, which summarizes the plot. Two brothers, Eteocles and Polynices, kill each other fighting for the throne. Creon, their uncle and now the king of Thebes, orders Eteocles to be buried with honors but lets Polynices’ corpse rot in the sun, as he was the aggressor. Their sister Antigone flouts the king’s edict and conducts a burial ritual over her “traitorous” brother’s body, proclaiming that the laws of gods are superior to human laws and choosing to follow her heart in protest of patriarchal authority.

This drama about morality, resistance, and justice, seen through the prism of Buddist philosophy, proves to be timeless and universally significant. Every society has to manage the dynamics of power, whether between rulers and citizens or men and women; every culture establishes a relationship with death and rituals of transition. In many spiritual belief systems, water is considered to separate the world of the living from that of the dead. That’s where the magnificent set design comes into play. In this Antigone, everybody already belongs to the world of the dead, to history, to the canonical texts of western civilization.

The story comes alive when a monk-like figure appears (the only person not dressed in all white), arriving on a boat and distributing the wigs that transform some of the chorus members into key players. Miyagi combines Japanese Noh and Indonesian shadow play to tell this ancient Greek story. The action is decoupled: for each character, one actor stays atop of one of the rocks scattered in the pool and performs the movement (minimal, yet expressive and doubled by a giant shadow); a second actor kneels in the water and delivers the speech. Splitting the characters in the Noh manner demonstrates the wisdom of Buddist detachment and the beauty of one-ness. Enchanting live music and occasional choral enhancement of the dialogue creates a dynamic soundscape (by Hiroko Tanakawa) that spellbinds the audience even further.

I have a soft spot for a self-aware theatre. People can watch a TV show or go to the movies if they are only looking for drama, but the theatre is still needed to allow audiences to congregate and reflect on the ways of our species, silently yet collectively. Shizuoka's otherworldly Antigone provides this experience by bringing the generous gift of Eastern theatrical traditions to the predominantly Western audiences of the Park Avenue Armory.