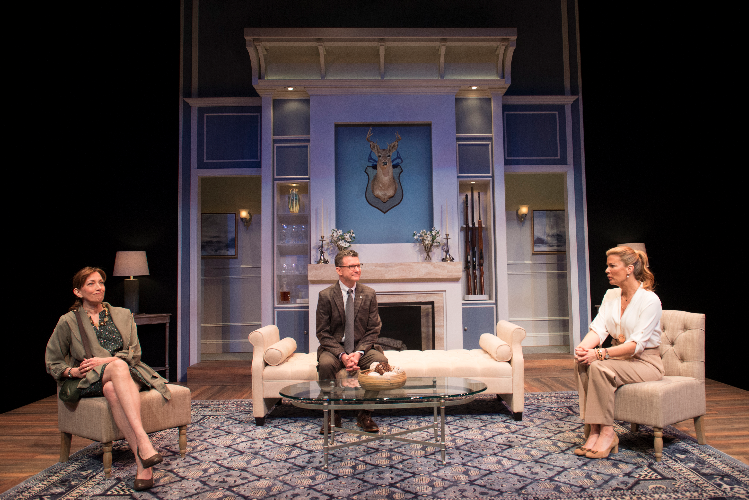 BOTTOM LINE: After plunges headfirst into a national conversation, but only ends up treading water.

It’s tricky to write much about the plot of a play that expends most of its energy concealing what it’s about. The ominous, somewhat grandiose title After indicates that Michael McKeever’s new play will engage with some significant event. McKeever delays the arrival of that incident for most of the play, but the trio of aggressively center-stage rifles on display (Chekhov’s gun collection, anyone?) and the early references to a “loner” teenager at school should clue audiences in to the general story. The real shocker is, with all the talk in American culture and media about the play’s central issues, After turns out to be just talk itself, with relatively little to say.

Kyle, son of the very wealthy, very ostentatious Julia and Tate Campbell (Mia Matthews and Michael Frederic), has sent a threatening, homophobic text to Matthew, son of Connie and Alan Beckman (Denise Cormier and Bil Phillips), who are also wealthy but less ostentatious (Mom’s got a potty mouth!). Kyle’s been suspended for three days, but Matthew’s parents want a steeper punishment, so Julia hosts the Beckmans for an afternoon of talking things over. Val (Jolie Curtsinger), Julia’s sister who does plebeian things like wearing jeans and relying on child support, shows up as a surprise mediator. We recognize that Val is the only really good parent because Julia says things like, “I don’t know how you do it” and “You’re raising those boys essentially by yourself.” Everything we’re going to learn about these people—all white, by the way (just like the cast of McKeever and director Joe Brancato’s last Off Broadway collaboration Daniel’s Husband)—can be gleaned in their first few minutes onstage.

Matthews’ Julia stands out, trying to diffuse the tension with fitfully awkward hospitality and effecting a believable transformation in her final de-glamorized appearance. And Julia’s gaudy living room, designed by Brian Prather and featuring a gigantic deer’s head clashing with a dainty seating arrangement, says all we need to know about the Campbells’ marriage. Cormier’s Connie makes a well-matched foil, simultaneously envious of, and disgusted by, Julia’s garish living room; her calls for justice for Matthew seem as much about giving the Campbells their comeuppance as protecting her son. (“Your entire existence is a Michael Kors ad,” Connie sneers, proud of her own sass.) The dads mainly fade into the background, although Phillips' Alan gets McKeever’s strongest monologue, a lecture on the perception and reality of danger delivered while aiming one of those rifles, in the first scene.

The characters that really matter, though, are the boys—they drive the action and the play asks us to take sides as to which parents have screwed up more. But without seeing the teens or learning much about them (besides the fact that Kyle’s “kind of a dick”), After feels like a denuded Dear Evan Hansen, a heaping order of adolescent psychologizing, hold the adolescents.

McKeever divides his play into three scenes (“Before,” “During,” and “After”), but, as the title suggests, he’s most invested in the last of those, and the first two scenes mainly feature wine, cheese, and barbed insults against the background of an ultimately tangential debate over helicopter parenting. Some of the snippy humor early on lands adroitly, but it all feels like it’s buying time until the great “event,” the aftermath of which becomes unnecessarily contrived and melodramatic with a last-minute reveal that undermines the play’s attempts at moral ambiguity.

“It’s funny, nobody talks about what happens after,” Alan says in the play’s final minutes. “Nobody considers you or the life you’re supposed to live after.” If that’s really the societal failure that After seeks to address, then McKeever might come closer by starting at the play’s tragic core and jettisoning the living room dramedy of After’s first two-thirds entirely. By the time there’s actually something worth talking about, this chatty quintet is all talked out.