Written by Patricia Lynn, based on Bram Stoker's Dracula; Directed by Jacob Titus
Presented by Hunger and Thirst Theatre

Off Off Broadway, Play
Runs through 10.27.18
The Flamboyan Theater at The Clemente, 107 Suffolk Street 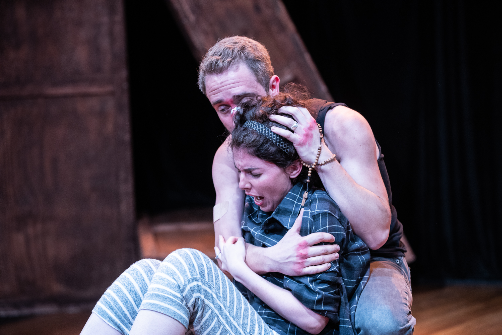 BOTTOM LINE: A modern, feminist take on the Dracula story.

Throughout history, vampire lore has functioned as a metaphor for seduction, violence, and humanity’s darker nature. Amidst countless modern examples of corrupt power and sexual violence, these themes hold special relevance, particularly in their portrayal of the victim/predator dynamic and treatment of once-marginalized perspectives. In its re-envisioning of Bram Stoker’s Dracula, Hunger & Thirst Theatre’s Your Invisible Corset gives the famous tale a modern twist, using Stoker’s female characters to explore issues of gender equality, trauma, and resilience.

Set in the present day but inspired by Stoker’s original plot, Your Invisible Corset begins as researcher Mina Murray-Harker (Patricia Lynn) wakes up in a park after a vampire attack, injured and unable to recall what transpired save for the involvement of her friend Lucy (Emily Kitchens). Fresh from a business trip to Romania, Mina's husband John (Patrick T. Horn) springs into action, working with Lucy’s wife Susan (Elizabeth Anne Rimar) to protect Mina and track down her assailant.

Hidden away in the psych ward where Susan works, Mina struggles to make sense of the fateful night, wavering between consciousness and visions of an undead Lucy, who beckons her from beyond to submit to the charms of the Master (Nathan Reese Edmonson). Frustrated with John’s over-protection and haunted by Renfield (Lauren Lubow), a mental patient claiming to be Dracula’s servant, Mina’s search for answers leads her further from reality and closer to the monster himself. When her visions reveal her deeper links to the vampire, and his plans for global domination, Mina must face her memories and attacker to save the world.

In its focus on Dracula’s female victims, the play’s #MeToo parallels are evident, placing Mina and Lucy as assault survivors and the vampire as the charming but malevolent specter of the patriarchy. Hunger & Thirst can run overzealous in its quest to drive home the piece’s symbolism, calls for uprising, sexually suggestive vampire attacks, and references to the “invisible corset” of stifled female potential being the most overt examples. Given that most of today’s audiences, particularly those drawn to feminist retellings, will make the thematic link, such over-reliance on exposition prevents the company from delving deeper into the nuances of trauma, survivorship, and the allure of power.

Nonetheless, the piece makes some promising steps in this direction, with Mina’s dissociative episodes and questioning of her role in the events mirroring the complex healing process of sexual victims. In Lucy’s rapturous fantasies and chilling insights, Emily Kitchens paints an unsettling picture of a woman lured to destruction and only beginning to grasp the extent of her circumstances. John and Mina’s dynamic also addresses matters of victimization and saviorhood: once equal partners, the headstrong Mina now chafes under her husband’s obsession with her attacker and his quasi-patronizing protection. John, having witnessed firsthand the monster’s power, truly believes this understanding leaves him best-equipped to save the woman he loves. In the pair’s efforts to regain equilibrium, we see the complexities inherent in our view of survivors and the fine line we walk between validating their experiences and respecting their capacity to transcend them.

Your Invisible Corset thrusts us into its world with jarring speed and rapid scenic shifts, embellished by lighting designer Yi-Chung Chen’s ominous reds, dreamlike washes, and dramatic strobes and blackouts. The in-the-round staging heightens the effect as supernatural characters lurk in the shadows or chilling sounds echo around us. Like Mina, we find ourselves scrambling to keep up and occasionally unaware of the time or space we occupy. Familiarity with Stoker’s story may give loose context, but the overall effect is to envelop us in the terror and confusion onstage.

As Lucy poignantly notes, despite efforts to slay our “vampires,” the effects of violence and trauma linger long after the immediate threat has past. As the post-2016 landscape reveals toxic systems and the seemingly fruitless attempts to dismantle them, this message cuts to the heart of modern feminists’ pain and collective battle fatigue. Though corrupt patriarchy may seem as ancient and indestructible as the fabled vampire, Your Invisible Corset honors our capacity to persist, calling us to face the darkness and reclaim our lives.

(Your Invisible Corset plays at the Flamboyan Theater at The Clemente Soto Velez Center, 107 Suffolk Street, through October 27, 2018. The running time is 2 hours with an intermission. Performances are Thursdays at 7, Fridays and Saturdays at 8, and Sundays at 2, with an additional performance on Sat 10/27 at 2. Tickets are $20. For tickets and more information, visit hungerandthirsttheatre.com.)