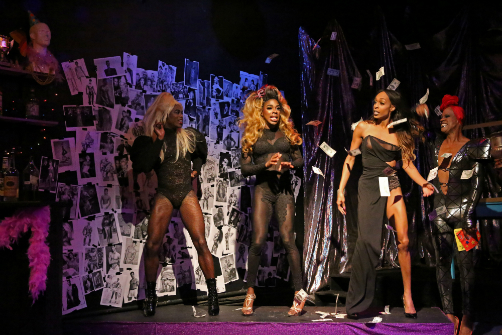 BOTTOM LINE: Drag and transsexual prostitutes sing and dance their way through troubling situations in the streets of 1990s NYC.

One of the most wonderful things about New York City is the diversity. Yet many of New York's most fascinating worlds have, over the years, been lost to commercialism. For example, those who visit NYC's Meatpacking District to stroll the High Line, shop at the boutiques, or traipse through the art galleries may not be aware of its lurid past. Trinkets, by Paul E. Alexander, aims to rectify this by providing a window back to the 1990s, when the Meatpacking District was a highly diverse scene where prostitutes, many of them transsexual, plied their trade.

Trinkets centers around three prostitutes: Diva (Honey Davenport), Janet (Jay Knowles), and Blondie (Antyon LeMonte). Yet prostitution can be extremely dangerous, so—despite stealing each others clients—these girls must look out for each other. For instance, their friend Monique still hasn't come back from a job with Blondie's client, and Blondie is quite territorial and upset. Then there's Strawberry (Mercedes Torres), who Diva has taken under her wing. Yet ex-hooker Trinket (Julia Rose), owner of the nightclub Trinkets, is advising Strawberry against this life. In fact, Trinket is also pushing Diva to leave the life as well.

Yet leaving isn't easy—many people refuse to hire transsexual ex-prostitutes. Trinket owns a nightclub only because of her rich husband. But perhaps Strawberry can take the same route as Trinket, when the famous artist Diego (Tyler Waage) notices her at the club. Yet Diego is there with famous fashion designer Bev Everly (Nora Burns) and the well-known model Binky (Isabel Lodge), so there are certain complications. As each storyline progresses, we see a common theme—the members of this community support each other, and are always there for those in need.

The costumes in this production are elaborate and really bring the environment to life. From wigs to thong cheetah-print leotards, from lace and corsets to stilettos, these characters really dress to impress. Since no designer is credited, it seems as if each performer supplied their own, perhaps not surprising given the drag performance background of many of them. Still, the time it took to create each persona, and then execute it with wigs, makeup, clothes, and accessories, must have been substantial.

But while the looks are all amazing, and the characterizations incredibly fun, some performers go from killing it in one number to sounding like 3 AM karaoke in their next song. It is striking how much the performance quality varies within a single show. While this may be partly due to the melodramatic style of the piece, or to the do-it-yourself nature of drag, perhaps a stronger directorial hand would help give Trinkets more consistency throughout.

But as I look back, it's the big group dance numbers, set in the nightclub, that I remember most vividly. The pulse of the scene and the interaction of the characters give life to an authentic club experience. This is partly due to some of the smaller roles, like Mr. Pea (Kevin Aviance), who is delightful as the club's emcee, completely committing to his strange character. These memorable scenes are electrifying, with many in the audience hooting and hollering (and taking photos and video) in response. So even if the show itself is somewhat uneven, Trinkets is clearly beloved by its audience.

(Trinkets plays at the Gene Frankel Theatre, 24 Bond Street, through February 3, 2018. The running time is 2 hours with an intermission. Performances are Thursdays through Sundays at 7. Tickets are $40 and are available at brownpapertickets.com or by calling 917-841-7567. For more information visit genefrankeltheatre.com.)