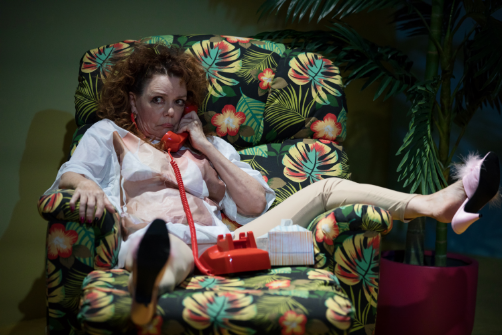 BOTTOM LINE: This wildly entertaining satire packs the solidest punch of a reality check and makes you reflect in an unexpectedly nuanced way.

The first word that comes to mind in Thunderbodies is saturation. The colors are saturated, the sound is saturated. One step into Soho Rep’s space, rotated and converted into a slender, shallow panorama, and the senses are filled to the brim. You take in Matt Saunders' scenic design, or no, it comes at you, assaulting your eyes along with the music that’s thumping and grinding with a tumultuous beat (those sweet designs by Chad Raines), until it cannot be ignored. The title of the piece, hung across the space in a shimmery, festive typeface, hints at the tone: equal parts lighthearted ridiculousness and satirical boldness. And then you settle into a world that’s unsettling and promisingly unexpected. Since the absolute knockout of a triumph that was Fairview, I’ve been wondering what else Soho Rep. might have in store for its predominantly white middle class clientele. And it certainly delivers another outrageously stylized, and unapologetically original, production.

Enter General Michall Itterod (Juan Carlos Hernández) and his thunder belly, hyping himself up for a marriage proposal to Grotilda (Deirdre O’Connell). Grotilda, a cross between Medusa and Janis Joplin, unabashedly spreading herself across her trusty recliner, has just accomplished her life’s work of losing the last 10 pounds. Leery of the insurmountable truth that all marriages end in divorce, the lady (who clearly wears the pants in this relationship) suggests a reverse in their romantic development: they shall throw down with a grand celebration to mark their divorce, and then crawl backwards towards the eventual nuptial bliss between newlyweds.

Oh, and the war is finally over. Except for the Boy (Matthew Jeffers), one last rogue soldier who is unwilling to come home despite the President’s (Ben Horner) personal summons via actual drone. The Boy, the last troop in the field whose sole worth seems to be defined by the continuation of war, soon meets the Girl (Monique St. Cyr), the last survivor of the conquered land. The two form an endearing and charged relationship that is also a metaphor of the relationship between the invaders and the invaded: they are bound by meaningless violence that has itself become the goal of war.

This short, rapid fire of a raucous romp is wildly entertaining, yet illuminating in its unparalleled marksmanship at exposing both the ridiculousness of reality and the surreal qualities of truth. Director Lileana Blaine-Cruz's thoroughly spot-on choices are a tremendous testament to Kate Tarker's thoughtful script. In the play's marketing, we see the characters’ faces being pressed forward, forced under scrutiny; they are here as well, dissected between laughter and exclamations. Tarker's language is deliciously unique yet not distancing—it’s just the right amount of cryptic, making you listen a little harder, yet letting nothing fall into obscurity. In this play, the word “grotesque” explains every positive feeling, which gives you pause: has the grotesque become such a national characteristic that the people have embraced it?

The characters themselves, embodied by a team of captivating performers, are most adamantly presented as caricatures of the grotesque. Grotilda (the name itself is derived from the adjective) is the center of attention whenever O’Connell steps on stage. Her embodiment of Grotilda's perpetually pissed off nature is a masterpiece, and her performance brings subtlety and gravitas to a character so over the top that it might come off as cartoonish. It must’ve been a helluva task being scene partners with her. Jeffers‘ Boy and St. Cyr‘s Girl bring some of the tenderer moments when they marvel at the beauty that’s still left in the world, and lament the outcome of war. The rhythms between the two performers are so engrossing that for a moment, you’ll forget you’re in a satire.

Thunderbodies, with its multiple threads of character development and high-comedy plot—including the crab suit-wearing General and the funniest presidential speech you’ll ever see as Horner makes you cry with laughter while stroking a cat and bragging about how soft his sweater is—is a relentless and ingenious roast of Americans as a people and of the country’s socio-political climate. It’s a delight to experience something that catches you off guard with its hilarity, yet makes you think in the most nuanced and complex way.