This Stretch of Montpelier

By Kelley Nicole Girod; Directed by Andrew Block
Produced by The Fire This Time Festival and Frigid New York
Part of the Planet Connections Theatre Festivity

Off Off Broadway, Play
Runs through 8.5.18
Flamboyán Theater at The Clemente, 107 Suffolk Street 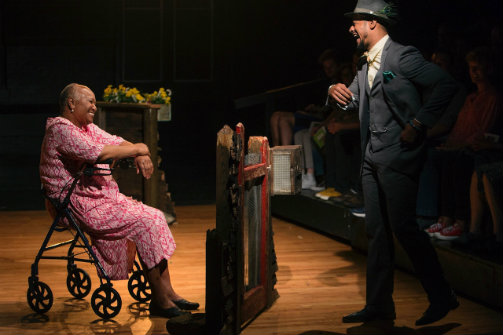 Geany Masai and Donovan Christie Jr. in This Stretch of Montpelier. Photo by Scott Fetterman.

Kelly Nicole Girod, Obie Award-winning playwright and producer of The Fire This Time Festival at Frigid New York, is the author of This Stretch of Montpelier, part of the Planet Connections Theatre Festivity. Ovation-winner Andrew Block directs the play, which benefits Gulf Restoration Network.

In several interlocking vignettes performed in different corners of the stage, we enter the houses of families who live on a stretch of road in Montpelier, LA. This part of the Pelican State does not like the noise and immorality of the “Big Easy.” The nosy old folks who live there attribute anything resembling change, from the presence of interracial couples to hurricane damage, to the machinations of the Christian deity. Those who ask why people suffer or try to understand their own suffering are not playing the game. How difficult for those multi-racial children (who are always referred to as “well-behaved” and with appreciation for their “straightened hair”) and anyone who doesn’t remember the 1950s. The ingenious thing about This Stretch of Montpelier is that it shows how tough one must be to survive in Montpelier.

Elderly Miss Janice (Geany Masai) has suffered some medical setbacks as well as the loss of several of her children; the one she abandoned is the only one who has survived. As she waits in her walker-chair for a regular doctor visit, she talks with the dapper Felonius, a man who is, as he puts it, a doctor of words. Trying his best to make a living through his frequent quoting of Shakespeare, the oddly-named Felonius has had a tough time hanging on to his lovely wife and two beautiful daughters. He feels like an educated fool, and, in a twist that would frustrate Chekhov, is found to be carrying a gun that he does not intend to fire.

Next door we meet the gossipy, aging Caucasian ladies, Kacky (Tandy Cronyn) and Ruby (Carole Monferdini). In their estimation, the moral character of the small town is not enriched by the presence of non-whites and homosexuals. They are not ruling out a Jesus-borne sequel to Hurricane Katrina. Tandy sees ghosts, a consequence of that time years ago when the ladies’ husbands killed a sixteen-year-old black boy who whistled at them.

Also down the road, the interracial couple Boniface (Lamar K. Cheston) and (Alisha Spielmann) may be ready to move to a more remote location. Violence against Boniface has left him shell-shocked (he calls it Post Traumatic Slave Disorder) and unwilling to live in a white-majority area. Frances has only been supportive, but must explain why she has been keeping her pregnancy a secret.

This Stretch of Montpelier has a languid irony that is cathartic. Is it true that Kacky’s husband died in the same way as the black boy he murdered, and will asking God about it do any good? Felonius can only smile good-naturedly when he hears that Ruby, product of a generation when women didn’t go to college, can barely read Young Adult books. His encouragement for her to keep learning one book at a time is the only way to unlock the achievement of dulling her jealousy. Jealousy leads to racism, which leads to murder.

While the play—which in many ways is really three short plays—leaves much to the imagination, its La Ronde-like structure brings us back to a familiar yet changed starting point. Louisiana native Girod has dug deep into the shady side of the polite Cajun society. Every character carries guilt for past misdeeds, something that director Andrew Block brilliantly coaxes out of the talented ensemble. And with seating on three sides of the stage, the audience can not only watch each scene, but can also watch the scenes watch each other, adding an interesting layer to what is largely a chillingly good evening.