This Ain't No Disco 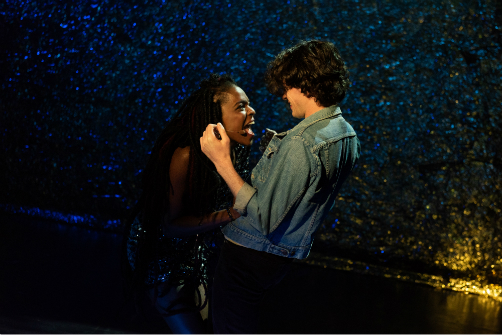 Samantha Marie Ware and Peter LaPrade in This Ain't No Disco. Photo by Ben Arons.

BOTTOM LINE: This Ain’t No Disco is a glittery musical love letter to Studio 54, sung by a melodious MC sporting hot pants and pair of bedazzled, rose-tinted glasses.

Andy Warhol once said that “In the future, everyone will be world famous for 15 minutes," something the characters in This Ain’t No Disco all must have in mind as they strive for their few minutes of glory. Like a 70s prequel to Rent (scaffolds and all), queer young and gifted artists hustle to make ends meet in New York City. Unlike Rent, these bohemians don’t eschew the lifestyles of the rich and famous, but instead aspire to transcend their menial lifestyles through fortune and (most importantly) fame.

Lights come down and disco balls spin as the stage becomes Studio 54 during its 1979 heyday. Neon signs advertising peep shows and porn theaters line the aisles and dapple across the ceiling, an ingenious choice by lighting designer Ben Stanton, who excels in setting the opulent 70s vibes. The master of ceremonies is none other than the legendary Steve Rubell (Theo Stockman, who exudes charm and lasciviousness). Desperate to be more than a nearly nude bus/rent boy is Chad (the boyishly handsome and dulcet-toned Peter La Prade). Accompanying him is the delightful queer coat check couple—aspiring artists Meesh (Krystina Alabado) and Landa (Lulu Fall), who is beginning to transition from Landa to Landon. Waiting on the outside and desperate to get in is Sammy, a soulful spoken-word poet and punk, brought to life with the amazing vocal stylings of Samantha Marie Ware. Upon finally gaining entrance past the velvet rope, Chad and Sammy are preyed upon by The Artist/Andy Warhol (Will Connolly) and Binky, an agent/PR amalgamation of Bobbi Flekman and Joan Rivers, played with scene-stealing brilliance by Chilina Kennedy.

Writer-lyricist-composer Stephen Trask is legendary for his ability to captivate audiences with raunchy camp numbers and breathtaking ballads (see his Hedwig and the Angry Inch), and he does not fail to disappoint here. Paired with the talented Peter Yanowitz, audiences are truly blessed to receive their catchy and inventive earworms. But while the individual elements blaze with talent, the musical as a whole doesn’t always shine so brightly.

Sammy is a self-described punk, a befuddling character choice considering most of her songs are soulful ballads. It remains puzzling that a member of punk counterculture chooses to spend the night in line behind a velvet rope, hoping to gain entrance to the epitome of popular culture. Also confusing is the District Attorney (Eddie Cooper), a friend who turns to foe for no clear reason, rabble-rousing rejected party-goers from inside the very nightclub he encourages them to oppose. Landa’s transition is also problematic, breezing past any acknowledgement of personal or societal struggle, concerned only with universal acceptance. While this type of support is ideal, the lack of any significant conversation comes across as both unrealistic and idealistic.

Although there are many talented artists involved with This Ain't No Disco, there might be too many moving parts for it to achieve its ambitious goal. While the lavishness and glamour of disco sparkles, the grime and the wildness of New York City proves elusive.