Written and Performed by Martin Moran; Directed by Seth Barrish 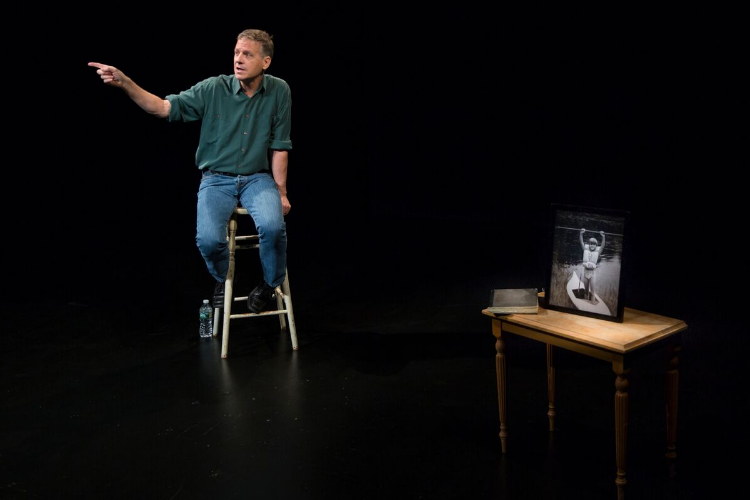 BOTTOM LINE: A complex story about a difficult subject returns, and proves to be just as, if not more, essential now.

The #MeToo movement has done much to raise awareness and share experiences of sexual harassment and abuse. But with its origins in social media, #MeToo also has a tendency to flatten stories and erase complexity, not to mention prioritize and demand (justified) anger rather than leave room for critical thinking. This is one reason why the Barrow Group’s revival of Martin Moran’s The Tricky Part feels not just timely but also refreshing, a necessary reminder of the humanity that can be found in even the most traumatic of events.

First staged in 2004, and directed (both then and now) by Seth Barrish, The Tricky Part explores a life-changing aspect of Moran’s adolescence: from the age of twelve to fifteen, he had a sexual relationship with a thirty-year-old man he met at a Catholic boys’ camp. And I choose my words carefully here: whereas most would rush to call this “abuse,” Moran strikingly never names it as such (indeed, the word “abuse” is only used by a Priest, in the context of a clumsy sex-ed talk to his male charges: “If you [masturbate], you abuse God.”) Which is not to say Moran doesn’t know it was wrong, or is under any delusion that this experience has had traumatic effects. But similar to Paula Vogel’s How I Learned to Drive, Moran’s aim is not the familiar and comforting narrative of righteous indignation and demand for retribution, but on working to understand how this experience made him the man he is today.

Perhaps it helps that when Moran seeks out this man thirty years later, he isn’t a famous Hollywood star or media mogul—he’s just a “plump person with a mop of white hair who looks to be someone’s grandmother,” a pathetic old man who Moran finds recovering in a convalescent home for veterans. It’s this encounter that frames the piece, allowing Moran to revisit, in stark, piercing detail, the first night he spent with “Bob.” As Moran begins this story, the lights dim—it’s “campfire time.” And thanks to Moran’s bracingly honest telling, this campfire tale is not just a scary story to tell in the dark. It’s both tender and disturbing, full of yearning and regret, a chronicle—filtered through both Moran’s thirty-year-old self who wrote it down and his fifty-something self who reads it aloud—of twelve-year-old Moran’s heart-breakingly conflicted feelings about the events as they are unfolding. It’s a remarkable achievement.

I missed the 2004 debut of The Tricky Part, although much of that staging appears to be in place—the same single stool, the same photograph of twelve-year-old Moran heroically standing in a canoe, and the same disarmingly conversational introduction, in which Moran’s hilarious observations about Catholic school might lull you into thinking this is going to be a very different sort of evening. Fourteen years later, Moran is a little bit older, and we’re all (we like to think) a little bit wiser, or at least less naive. But if you think you’ve heard plenty of these sorts of accounts, The Tricky Part is not the “child sex abuse show” you might think. It’s a story of reckoning, yes, but also one of grace and kindness, one that suggests that there might be value in even the worst experiences, and one that recognizes, in Moran’s wise words, “that what harms us might come to restore us.” It’s an essential piece of theatre, and we are lucky that Moran and the Barrow Group have brought it back—see it if you can.