Off Off Broadway, Play
Runs through 8.3.18
Flamboyán Theater at The Clemente, 107 Suffolk Street 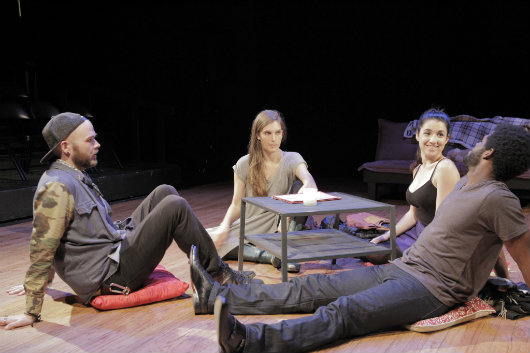 BOTTOM LINE: The joy of connection is even more remarkable in a world where many are in pain, on medication, and on Tinder.

In Mike Poblete's intriguing new play Surfacing, Marissa (Suzannah Herschkowitz) is a painter who just downloaded Tinder; hours later, she has her first date with Atticus (Joey Donnelly), the head of a poetry website. Marissa, who was injured in an accident and walks with a cane, doesn’t filter her thoughts. And she  doesn’t drink, thanks to her medications for pain and depression. Atticus finds her darkly comic ways very refreshing. Atticus and Marissa share at least one medication, joke about not slitting their wrists in the bathroom, and seem interested in going out again.

Marissa’s younger sister Chelsea (Montana Lampert Hoover) is a recent college graduate who moved to New York to take care of Marissa. Not content just to have gotten her sister on Tinder, Chelsea suggests a double date with her new boyfriend Jed (Jak Watson), a 33 year-old finance guy. At the Korean-Moroccan fusion restaurant, Jed throws around cash and his very high self-esteem, but Marissa finds his interest—both in her much younger sister and in herself—a bit creepy. Grossest of all is Jed’s opinion that single women in their 30s are bitter and broken. Atticus and Marissa leave the other couple and go home, where they plan to overcome their shyness and become intimate.

Over the course of a long night, Marissa finds herself triggered by Atticus and then, after sending him home, discovers that Jed is in their other bedroom with her passed-out drunk sister. Jed, stripped to his underwear after Chelsea threw up on him, shares his secrets with Marissa. Their vulnerability leads to artistic inspiration as well as intimacy. But what will happen in the morning when Chelsea wakes up?

The four-person cast is strong, each fully invested in their performances. I believe Hershkovitz when, as Marissa, she threatens to walk over on her cane and smack someone. As Jed, Watson has some wonderful reveals about a childhood spent hiding in the bathtub from his abusive father, and how a bathtub photo ended up on his Tinder profile. Sam Gordon’s lighting helps us through a long, cold winter night in various minimalist, liminal spaces.

Surfacing is a play that succeeds on all levels. Its comic, punchy, uncensored dialogue is enough to make anyone relax. The language is definitely for adults, yet leaves space for one’s inner child (and college-age self). You can tell that this characters like poetry when it is ironically referred to as “an attempt to describe a feeling without really capturing it.” Seeing a bunch of talented, sensitive characters who all have social anxiety and deep-seated feelings of inadequacy is a helpful reminder that, yes, probably some part of each of us is achieving great things in spite of ourselves. And Poblete's remarkable writing comes vividly to life in the hands of director Daniella Caggiano. I have never relaxed so much listening to characters joke about suicide. Surfacing seems as good a way as any to further the dialogue about not shunning people with depression.