Sources of Light Other Than the Sun

By Sam Hood Adrain; Directed by Jill Carucci
Produced by What Will The Neighbors Say? 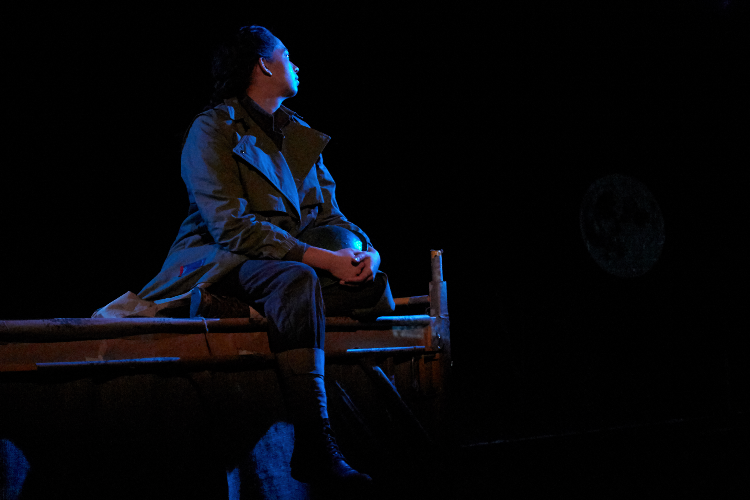 Maggie Thompson in Sources of Light Other Than the Sun.

BOTTOM LINE: A heartbreaking and thought-provoking story about hope in hopeless places, set in a WWI bunker.

When you’ve spent too much time in darkness, you marvel at the beauty of even the slightest bit of light. For the same reason, we tell stories of tremendous pain so as to remember the strength of hope in the darkest places. In Sources of Light Other Than the Sun, we relive a slice of memory from the point of view of an ordinary World War I soldier, Burt Smith (Maggie Thompson), enduring the darkness of trench warfare.

Playwright Sam Hood Adrain has given us a complex story within an elegant framework. The play shifts between two frames of storytelling: Burt's letters to Lizzy, his sweetheart back home, addressed directly to the audience, and scenes that center on Burt's unit, spending day after day in a dark bunker, waiting for nightfall. Through the letters, we get direct access to the evolution of the protagonist’s emotional journey, and through the scenes, we witness the psychological trauma the soldiers experience in a place without sun, both literally and metaphorically.

So what are the sources of light in No Man’s Land, when daylight could be fatal? There’s the glow of a cigarette: we learn that Burt would write his letters under that faintest glow, and those moments become magically intimate when you realize that two hearts can remain connected through nothing but words. And then there’s fire—not a luscious campfire, as the soldiers don't want to give away their positions, but some measly, fickle candles, or oil lanterns that don’t cover much beyond a card game. Finally, there's starlight.

With a bunk bed structure, scenic designer Lauren Barber is able to effectively create multi-levels (the underground bunker and the night watch out in the open) with clearly limited resources, and transform the black box at HERE into a dazzling canopy of stars with simple string lights. Lighting designer Elizabeth M. Stewart has created a rich palette for the production that is ambient and evocative. The precise, directional effects make it clear that the scenes take place in the dark without sacrificing clarity. We experience darkness without being swallowed by it, while still being able to see the play without straining our eyes.

When you’ve spent too much time in darkness, you begin to only see things that want to be seen. This is how I felt at Sources of Light Other Than the Sun; it was satisfying to see a piece with such a clear point of view, something that’s often forsaken in favor of style. I was also impressed by the gravitas of the ensemble of actors, who have the capacity to define emotional journeys in difficult places. Ana Cristina Schuler's Jimmy and Thompson‘s Burt have an easy chemistry that make their scenes particularly memorable.

The production, helmed by Jill Carucci, is thought provoking, to say the least. It asks tough questions and shows the ugliness and beauty of humanity in juxtaposition. Most importantly, the play exposes the Sisyphean nature of war, as the cycle of pointless killing and even more pointless dying goes on. It has some gorgeously poetic language, delivered in earnest and well. It also adds a layer at the end that connects the play to the present. Though I was delighted by it, I also wished for greater context; it felt like the beginning of a second act that got cut short.

When you’ve spent too much time in darkness, the play also asks, is hope a dangerous thing, or is it life sustaining? One thing is for sure: as humans we find sources of light in each other, in words, in stories. And even if hope and imagination drive us mad, they remind us that there’s something to live for.

(Sources of Light Other Than the Sun played at HERE Arts Center, 145 Sixth Avenue, December 7 through December 9, 2018. The running time was 70 minutes with no intermission. Performance were Friday and Saturday at 8:30; Sunday at 4. For more information visit wwtns.org.)