Music and Lyrics by Jerry Leiber and Mike Stoller; Directed and Choreographed by Joshua Bergasse 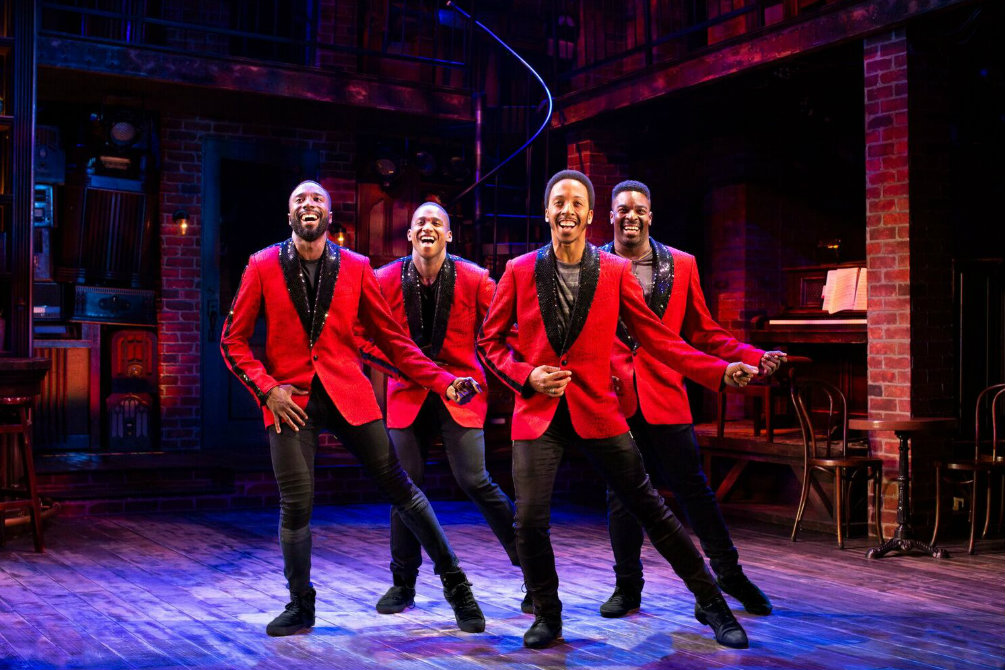 BOTTOM LINE: Those who missed the 1995 Broadway production, or who simply want to spend time in the company of the legendary composers, are guaranteed to be clapping and singing along with this expert cast.

Twenty-three years ago, Stephen Helper and Tom Viertel put together a revue that joyously celebrates songwriting duo Jerry Leiber and Mike Stoller. The show features more than three dozen classic tunes that span a good part of the 20th century and a wide variety of genres: rock, R&B, doo wop, and more. Over the decades, the duo worked with countless musicians, including Elvis, Ben E. King, and Peggy Lee. The prolific pair crafted songs that many, regardless of age, will likely recognize, such as “Jailhouse Rock,” “Kansas City,” “I’m A Woman,” and “Stand By Me.”

There’s no plot to speak of, which allows the audience to simply enjoy the very talented artists. The nine ensemble members—Dwayne Cooper, Emma Degerstedt, John Edwards, Dionne D. Figgins, Nicole Vanessa Ortiz, Kyle Taylor Parker, Jelani Remy, Max Sangerman, and Alysha Umphress—have extensive theatre credits, including Hairspray, Motown and Jersey Boys; not surprisingly, all are fantastic singers. The male quartet of Cooper, Edwards, Parker and Remy perform together many times and harmonize beautifully on numbers like “Searchin’” and “On Broadway.” Cooper’s deep voice is deftly employed, often to hilarious effect. There are only a handful of selections that feature just the women; they’re given more solos and ensemble numbers. Figgins, a ballerina with the Dance Theater of Harlem, gets to show off her dance prowess in the witty “Dance With Me” and in a lovely version of “Spanish Harlem” with Remy. My favorite female solo is Umphress’s heartbreaking interpretation of the lesser-known, country-tinged “Pearl’s a Singer.”

Joshua Bergasse (who worked on the late, lamented Smash) uses a light touch with the chock-full production. The show transitions seamlessly from song to song; my favorite juxtaposition is between Umphress’s mournful “I Keep Forgetting” and the silly “Teach Me How to Shimmy” that opens with Degerstedt, in a bright pink fringed mini, bursting through the door. As a choreographer, Bergasse doesn’t let his energetic cast rest. They climb up and down the stairs, hop up on the bar, and in Remy’s case, do some very impressive back flips on “Jailhouse Rock.” And points to Bergasse for putting actual musicians on stage and having them do their own song during the showcase. That said, I would have liked to see pairings other than strictly heteronormative ones.

Beowulf Boritt’s set is a cozy, casual bar replete with old, large radios and neon beer signs for such classic companies as Ballantine, Schlitz, and Hamm’s. Alejo Vietti outfits the women in vivid costumes and even the men get a turn dressing up in matching suits for "On Broadway." Under music director Matt Oestreighcher, the rollicking eight-piece band makes the café seem like an even more fun place to hang out.

Come for the nostalgia, stay for the songs and the transportive performances.