By Anton Chekhov, Heiner Müller and The Assembly; Directed by Jess Chayes and Nick Benacerraf
Produced by The Assembly 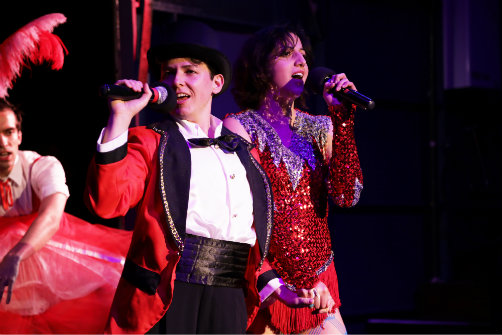 BOTTOM LINE: A dialogue between The Seagull and Hamletmachine (thus our dialogue-review), Seagullmachine is The Assembly’s ambitious attempt to examine two texts haunted by The Bard’s most canonical work.

Ran Xia: So what exactly is Seagullmachine? It's a hybrid of Anton Chekhov’s The Seagull and Heiner Muller’s Hamletmachine, one in which a traditional staging of one is disrupted by the neuroses of the (very) experimental other, and also vice versa—where the present, and even the future, is observed through a classical lens.

Asya Danilova: To be honest, I never noticed how much The Seagull was inspired by Hamlet. I am grateful for the fact that Seagullmachine emphasizes their similarities and allows us to look at Chekov through the prism of Shakespeare. However overloaded this post-postmodernist production might be, it gives us an interesting perspective on classical texts.

Ran: One thread that binds the two together is the archetype: The Seagull's Konstantin (Jax Jackson) as Hamlet as the artistic young man who’s troubled by the antics of his mother, his own unrequited love and identity crises, as well as his hatred…that might be a strong word…perhaps jealousy, towards his stepfather. You can pretty much match up who’s who between Hamlet and The Seagull.

Asya: And then there is Müller’s Hamletmachine, which is staged in its entirety in this production. This avant-garde, bizarre play written in 1977 is only a few pages long. But it is so dense and abstract that it might make your head spin. It is like being trapped in another of Konstantin's plays.

Ran: In a very meta sense, it’s as if Kostya turns his own life, as well as that of everyone else within The Seagull's universe, into a futuristic play—Hamletmachine, in this case. Yet I kept wondering whether we were supposed to see Hamletmachine, rather than Hamlet, within the context of The Seagull. I still see Nina (Layla Khosh) as Ophelia, and Arkadina (Nehassaiu deGannes) as Gertrude, for example.

Asya: By the end of Seagullmachine it is difficult to tell who is who. But I don’t think such distinctions are ultimately necessary. In the carnival of Hamletmachine, the roles shift. Even the clear boundary between the audience and the actors ceases to exist. Or at least I think this was the intent. In practice, the transition between the "traditional" audience and a more participatory one doesn’t happen smoothly. In fact, it was difficult for me to participate in the “theatre of the future” that culminates this production after first watching a more or less traditional staging of The Seagull.

Ran: Of course the aesthetic is quite eclectic. Stepping into the space, my first impression was that this looks like a Brooklyn café with a past life as a warehouse. Nick Benacerraf and Emmie Finckel‘s set also converts La MaMa’s backstage area into an intimate theatre in the round. The regular performance space and empty risers are separated by a garage door that serves as a curtain for the playing space of the play-within-a-play bits. Kate Fry dresses cast and crew in mismatched outfits that seem to be pulled from Beacon’s Closet: the school teacher’s vintage tweed coat paired with trainers, and Trigorin’s proper three-piece suit and bowtie...and sandals.

Asya: I felt like this “mismatching” design helps to see The Seagull as a timeless story as opposed to a period Russian drama. The costume design also points to the meta-theatricality, which blows out fully towards the end.

Ran: Agreed. There is this intentional inconsistency and self-awareness. So I was looking forward to a subverted version of The Seagull. Yet it turns out to be pretty conventional. Well, except for when certain characters have out-of-body experiences. For instance, those moments when Nina becomes possessed by the ghost of Ophelia and speaks words from Hamletmachine.

Asya: I like those moments. They are where The Seagull “cracks” and you can see Hamletmachine peaking through. The accompanying change of lighting (Miriam Crowe) and video-art pieces (Ray Sun) on TVs in the corners of the room help provide a mysterious atmosphere. When Nina speaks Ophelia’s lines (from Hamletmachine), sound designer Asa Wember even modifies her voice through a microphone, as if Ophelia had possessed her.

Ran: Given the production note about how both plays are haunted by Hamlet, the monitors are almost like a ghostly presence of the play being similarly haunted. However, the mash-up of the two plays doesn’t quite go beyond those few moments, and the transition between them—when The Seagull transitions into Hamletmachine—is a little abrupt.

Asya: Basically, Konstantin decides against shooting himself. Instead, he puts on a cabaret show!

Ran: Which starts with "Happiness Is A Warm Gun," in a whole Moulin Rouge-esque get up. I thought it was appropriate, and a self-aware wink-wink to address the trope of the Chekovian gun.

Asya: It’s also when the characters of The Seagull transform back into the actors of The Assembly.

Ran: To me that particular transformation was unclear. Perhaps this ambiguity is intentional, but I found myself struggling to pinpoint where The Seagull ends and Hamletmachine begins, since the structure of the production seems to juxtapose the two, rather than to fully mash them up.

Asya: Maybe the mash-up occurs towards the finale of The Seagull? Kostya puts on a papier-mâché mask of a woman’s face at the family gathering, a concept echoed in Hamletmachine, when Hamlet “becomes” Ophelia and repeats her monologue. The mask also allows Kostya to become almost unseen, or else to simultaneously exist in both of the theatrical worlds we’ve been introduced to. I actually like that there’s no firm ground to stand on. Seagullmachine doesn't dictate how we ought to interpret the show, or how the three plays relate to each other.

Ran: We should also talk about what happens after the cabaret, where the piece becomes more immersive. Basically, members of the audience are invited to a “gallery” of theatre past, present, and future, set up in the space where the actual stage used to be. Elaborate costumes of various styles and eras populate this bizarre arena. With new costumes, the ensemble transforms into a band of idiosyncratic tragedians—somewhat like the archetypal crew from Rosencrantz and Guildenstern Are Dead. The space then explodes into a dance hall, a cacophony of confusion and joy, before turning somber when each actor addresses the same monologue to a small group of audience members.

I really liked this moment—it felt intimate. But I feel like it doesn't illuminate much, or help me understand anything about “why this” and “why now.” Of course The Seagull, Hamlet, and even Hamletmachine have timeless qualities and don't require arguments to be made for their relevance. And yet the attempt to update these texts seems to become more of a time-warp experiment on perceptions that is lacking in clarity. As someone who appreciates theatre for its own sake, I enjoyed both The Seagull and Hamletmachine within this Seagullmachine mash-up context, but I am a bit disappointed that this production doesn't challenge me in a way I think it could (and should) have.

Asya: To me, the key is Hamletmachine, which at least in this version is a meditative flow of imagery and words—some taken from Hamlet, some commenting on the political atmosphere—and all the elements get ground together. You can tune in or out, so it’s up to you how much you want to participate. In other words, you can choose to connect to something intellectually or just enjoy the neon rave dance party.

Ran: I think I'm stuck on how this production is haunted by an obsession with Hamlet, which of course is appropriate since both The Seagull and Hamletmachine were also supposedly birthed from a similar obsession. But it seems to me this new Shakespeare-Chekhov lovechild developed out of an intellectual process as opposed to something personal and emotional. So I think that’s the reason why it doesn't resonate with me in a visceral way.

Asya: I think those earlier out-of-body experiences are what have the most potential of emotional impact. Those moments—where you can see one text looking at you through another—are chilling and beautiful. I actually wish The Assembly had included more Hamletmachine within The Seagull, a play that is surprisingly accommodating.

Ran: Yeah—these are my favorite moments of the show too, when the texts are layered on top of each other, and then one bursts out. It's in these elevated moments where we truly feel the connections between the various texts and characters, the metaphor and the reality, and the past and the present. And I guess that's what Seagullmachine is all about.

(Seagullmachine played at LaMaMa, 66 East 4th Street, April 14 through May 5, 2018. Running time was 2 hours 40 minutes with one intermission. Tickets were $30; $25 students/seniors. For more information, visit lamama.org.)