The Russian and The Jew

By Emily Louise Perkins and Liba Vaynberg; Directed by Ines Braun
Produced by Anna & Kitty, Inc. and The Tank 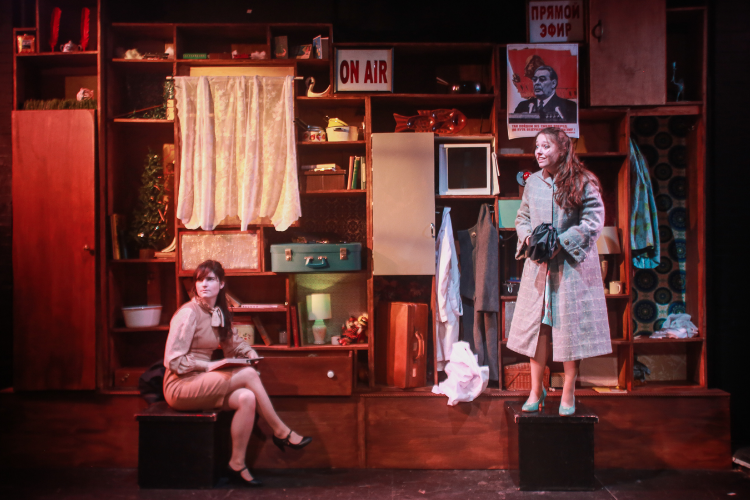 Liba Vaynberg and Emily Louise Perkins in The Russian and The Jew. Photo by Matthew Dunivan.

BOTTOM LINE: With inventive storytelling, The Russian and The Jew succeeds in being an intimate, magical, festive tale impeccably secure in its own 1960s period while linking itself to the social and political present.

Forgetting the social and political struggles of our history, even recent history, can make us blind to our future and thus ill-advised in our present. This idea is not revelatory, yet, like history, it can be easily forgotten. History forgotten means history not learned, and the repetition of events is inevitable without growth. How then to make history memorable so that current generations do not repeat the same mistakes? One answer is to make history felt, to drive it deeper than the brain, and place it indelibly in the heart. And the best way to do this is with a story. That’s where Emily Louise Perkins and Liba Vaynberg’s magical new play The Russian and The Jew lives, as a New Year’s story.

The play begins with public radio announcer Alexei (Mat Margolin), a Russian immigrant with a smooth voice now living in Brooklyn, thanking the foundations that make his radio program possible (a great in-joke for those of us who grew up listening to NPR). Alexei then tells us that New Year's was the only holiday sanctioned by the communist Russian government, and that he’d like to tell us the story of his wife. Instantly we are transported to 1960s Russia, where we witness old friends reuniting, love affairs, the constant queuing for goods, careers and lives stunted by gender bias and anti-Semitism, and the ever-present dream of a life unwatched by an all-knowing government. It is at once both foreign and strangely familiar. This is all played alongside the narrative of the Frog Princess, a Russian folk tale Alexei's wife Lena ((Liba Vaynberg), an established doctor, tells her son. Through Lena’s eyes we witness the complexities that arise out of the roles we play in order to survive, as chosen family clashes with the tribes into which we are born.

The Russian and The Jew raises many complex questions. After we are shown the delightful whimsy of the fairy tale world, Alexei tells Lena to stop reading it to their son, because fairy tales are propaganda. And of course, if fairy tales are propaganda, then all stories, including this play, are propaganda. The Russian and The Jewis asks us to see everything with a critical eye, to reject blind faith, and to realize, without judgment, that everyone has an agenda. Mistakes are made, and redemption can require sacrifice, but those who survive by trusting the status quo live in a privileged paradise. Lena’s childhood friend Katya (Emily Louise Perkins) carries the societal stigma of a divorcée, but this identity is potentially temporary and does not pervade every moment of her life, in contrast to Lena’s cultural heritage or Alexei’s political imprisonment.

The direction, by Inés Braun, capitalizes on the intimate playing space, making the audience feel cozily part of the tale. As the play jumps from scene to scene, flitting back and forth between reality and fairy tale, Braun finds inventive and minimal ways to guide us through the whirlwind. A single prop or set piece lands us firmly in each new setting with clarity. Maximum trust is given to the ensemble, who expertly juggle multiple characters and dialects with ease. The flaws of each character are complemented by much love and humor, perfected by Emily Louise Perkins, whose near constant vulnerability is as disarmingly hilarious as it is heartbreaking. And because The Russian and The Jew is framed not only by the Frog Princess narrative, but also centers around the festive time of New Year's, this makes it a touching piece for the holiday season.