By Ken Arpino and Jesse Joyce; Directed by Jonathan Tessero 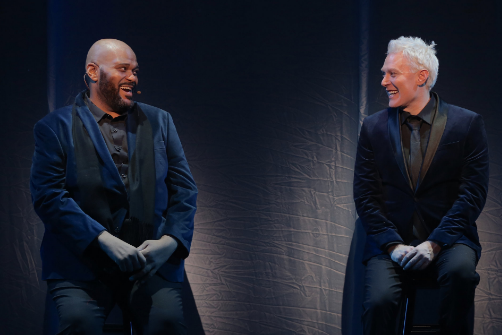 BOTTOM LINE: 'Tis the season for reality show contestants to sing seasonal fare on Broadway. Fans of Studdard and Aiken will rejoice; others might find themselves feeling a bit more like the Grinch.

In Christmases long past, say the 1970s or 80s, if you wanted corny but dazzling seasonal-themed extravaganzas, your choices might be limited to the Rockettes or TV variety shows. Today, audiences can find cheesy holiday-themed entertainment live on Broadway, where recent offerings have included former variety show staples the Osmonds in Donny and Marie: A Broadway Christmas (2010), and Home for the Holidays (2017), starring a random assortment of reality show winners. This year’s Broadway Christmas cracker is Ruben and Clay’s First Annual Christmas Carol Family Fun Pageant Spectacular Reunion Show, starring American Idol alums Ruben Studdard and Clay Aiken. Remember them? This show assumes you do, right down to their original audition outfits, which are lovingly re-created.

The show’s inspiration comes from its stars’ reality show roots and the variety shows of yore. The opening number, a tongue-in-cheek tribute to Studdard and Aiken’s competitive Idol origins and Broadway musicals, is genuinely engaging. And throughout the show Studdard—and particularly Aiken—try their best to make the material work, using every firework in their arsenal during lushly orchestrated solos and duets. Songs include a variety of traditional carols and pop standards, ranging from an overly long medley of songs from Christmas movies to a spectacular version of “O Holy Night.” Ruben and Aiken are in fine voice and have genuine rapport. They are supported by a talented ensemble of energetic triple-threat entertainers: Farah Alvin, Ken Arpino, Julian Diaz-Granados, La’Nette Wallace, and Khaila Wilcoxon.

Ensemble-member Arpino also doubles as a writer alongside the Emmy-nominated Jesse Joyce. Unfortunately, the scripted banter is so leaden it makes re-runs of The Sonny and Cher Show look like Shakespeare. Threads are introduced randomly and left unresolved, such as an Act 1 plotline about a millennial Ghost of Christmas Future who predicts Aiken will die if he performs a Christmas-light-themed number. Aiken’s subsequent fake “death” is quickly forgotten after intermission, never to be referred to again. Awkward jokes are shoehorned into the dialogue for no apparent reason, including a toilet joke featuring Studdard, who performs the unfunny bit with a distinct air of embarrassment. Imagine a Christmas concert written by two bored seventh graders, and you get the idea of the evening’s tone.

It didn’t have to be that way. On the night I saw it, there were technical difficulties with a pre-recorded video segment. While the show was temporarily stopped, Studdard and Aiken stepped onstage to engage in some ad-libbed patter and sing an impromptu duet of “Have Yourself a Merry Little Christmas.” Their off-the-cuff musings and heartfelt, riff-free singing radiated more sincerity than the evening’s strained scripted segments.

Ruben and Clay's Christmas Show has a pre-fab Christmas-y set designed by Rob Bissinger, replete with fake Christmas trees, a fake fireplace, and some fake snow. Paul Miller’s vibrant lighting makes everything glow with Broadway splendor. James Brown III’s glitzy costumes include some on-trend sequined ensembles for the chorus and lovable ugly Christmas sweaters for everyone. The awkward banter doesn't seem to bother the enthusiastic audience, especially those enjoying multiple cocktails from the concession stand. A post-intermission video reminds everyone that a portion of the proceeds benefit the National Inclusion Project, a charity co-founded by Aiken to advocate for children with disabilities. So while the lazy writing might suggest this is a cash grab, it does have a genuine charitable purpose. Overall, fans of Studdard and Aiken will be enthralled; everyone else might find Ruben and Clay merely an agreeable, if forgettable, holiday entertainment.