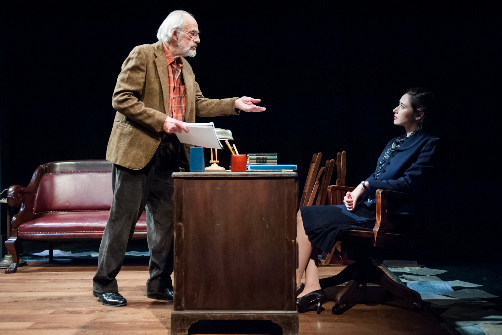 BOTTOM LINE: Christopher Lloyd plays Ezra Pound in this new drama that depicts the poet’s incarceration in a psychiatric hospital.

The only things I ever learned about Ezra Pound was that he was an anti-Semite and was charged with treason. My teachers failed to explain why he was considered one of the most important poets of the twentieth century. I suspect they didn’t know themselves, and surely the merits of his poetry are more difficult to demonstrate than his political views. I was hoping that Sean O’Leary’s play would send me home with a modicum of appreciation for Pound’s work. But just like high school, the play’s focus is Pound’s anti-Semitism and reverence for Benito Mussolini.

The play takes place at St. Elizabeth’s Psychiatric Hospital in Washington, D.C., where Pound (the inimitable Christopher Lloyd) was incarcerated for twelve years after being deemed unfit to stand trial for treason. Dr. Ann Polley (Kate Abbruzzese), a young psychiatrist assigned to Pound’s case, struggles to keep him in her office long enough to engage in therapy. Eventually, she earns his trust and he begs for her help. But the reality that she illuminates is too much for him to take.

The real draw of this play is not Ezra Pound at all, but Christopher Lloyd. As a child of the '80s, I treasure my memories of Lloyd as Doc Brown in Back to the Future, right up there with James Earl Jones’s Darth Vader and Harrison Ford’s Indiana Jones. The chance to see Lloyd live onstage in an intimate Off-Broadway theatre was too much for me to resist. He does not disappoint: his presence is arresting, and his masterful yet effortless use of language brings to life Pound’s bullheaded stubbornness and raging passion. The fact that he struggled to recall his lines for the first half of the show made his character somehow more sympathetic as a confused old man. During the second act, Lloyd carried a script in hand, which didn't seem to trouble the audience in the least. After all, the man is a legend, and at 79-years-old, it’s generous of him to show up in the first place.

While Lloyd is the main draw, Abbruzzese’s performance as the psychiatrist is just as captivating. She stands up to Lloyd’s stardom with fire in her eyes and refuses to be bullied. It was delightful to see Lloyd paired with a partner who could consistently hit the ball back to him with power. Unfortunately, without Lloyd and Abbruzzese’s talents, O’Leary’s play comes up a bit short. I had a hard time investing in the story because I didn’t care enough about the characters’ objectives. Dr. Polley’s motivations are not revealed until the play’s conclusion, so one isn’t sure what we’re pulling for in her case. That only leaves us with Pound’s mental well-being to root for, but do we really care if a cantankerous old fascist sees the error of his ways, particularly for those of us whose high school education failed to make us appreciate his poetry?

Under the direction of Kathleen Butler, the story is told from Pound’s point of view, and clearly it is the mythological reputation of this literary giant that grabs our attention. But the story’s real mystery and intrigue rests in Dr. Polley’s motivation to treat Pound. The only dramatic question to be found seems to involve whether or not Polley’s therapeutic approach was ethical. Unfortunately, this question is not broached until the denouement. If the play could be reframed to place Polley in the foreground and Pound in the background, it would be infinitely more compelling. Of course, then you would need to name the play Polley, which will admittedly sell less tickets than the current title.

(Pound plays at Theatre Row's Lion Theatre, 410 West 42nd Street, through October 28, 2018. The running time is 90 minutes with no intermission. Performances are Thursdays through Saturdays at 8; and Sundays at 2. Tickets are $71.25 and are available at triumvirateartists.com or by calling 212-947-8844.)