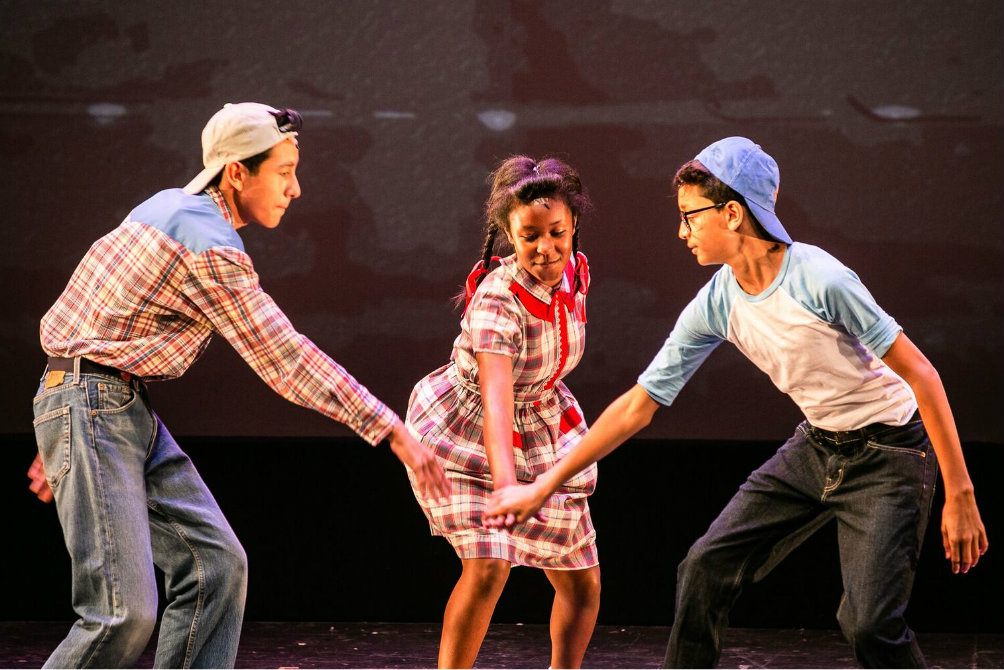 For anyone disturbed by our current immigration policies (and with little kids being torn from their parents and put in cages, is anyone NOT disturbed?), it’s tempting to wax nostalgic for a time when immigration was “easier.” And while our borders may be a bit more terrorized now, immigration has never been easy, especially for families who are forced to separate. The new musical Pedro Pan clearly understands this: while it remains hopeful, it never glosses over, or whitewashes (pun mostly definitely intended), the difficulties of the immigrant experience.

12-year-old Pedro (Gregory Diaz IV) loves his life in Cuba. But after the Revolution, his Papi (Wilson Jermaine Heredia) and Mami (Genny Lis Padilla), both critical of Castro’s militaristic regime, start to think he might not be safe there. As the threat of violence intensifies, they make the difficult decision to send him to New York City, to live with his Tia Lily (Natalie Toro).

For those up on their Cuban history, Pedro’s trip is not an isolated one – between 1960 and 1962, over 14,000 unaccompanied kids were sent by their parents to live in the United States. This mass exodus, called “Operation Pedro Pan,” was a joint effort by the Catholic Welfare Bureau and the U.S. Government, along with more covert help from underground organizations in Cuba. Parents likely thought this was only temporary, but after the Cuban Missile Crisis all travel to the U.S. stopped, and it wasn’t until 1965 that many parents were able to reunite with their children.

Pedro Pan doesn’t get into all of this, however, keeping the focus on Pedro and his journey. The scenes in Cuba deftly establish both Pedro’s love for his country and his growing sense that things are changing for the worse. If book writer Rebecca Aparicio doesn’t get super specific about the messy politics of the time, it’s likely because young Pedro wouldn’t understand much either. The focus is more on the family’s fear of what might happen, and their sadness once Pedro’s parents decide what must be done. Heredia and Padilla both excel at holding back their emotions as they struggle to stay strong and cheerful for their son’s benefit; their song “Fly,” one of the best, and most moving, numbers of the show, reminds us that flying is not a joyful experience for every Peter Pan.

When Pedro arrives in New York, he has a difficult time at school, something not helped by his lack of English. But while he is mercilessly bullied for speaking Spanish (hello 2018!), he manages to find a few friends – Roger (Julian Silva), who arrived from Mexico two years earlier, and Wendy (Taylor Caldwell), who just moved up north from Birmingham. Through their friendship, the three “lost boys” (sorry, “Wendy and the Lost Boys”) provide a glimpse into the potential of PoC solidarity as they work to make a place for themselves in a school, and a city, where they are not immediately welcome.

There are so many wonderful things about Pedro Pan, it’s difficult to know where to begin. The music by Stephen Anthony Elkins is sheer bliss, from the opening “Havana, Como Te Quiero,” to Roger and Pedro’s goofy “We Won’t Stand Out,” to Wendy’s anthemic ‘Beautiful.” I especially loved Pedro’s plaintive solo “Why Can’t I Just Be a Kid?” (a new addition for this incarnation), which gives voice to the struggles young Pedro is experiencing.

The costumes, by Rachel Dozier-Ezell, are some of the best I’ve ever seen in a festival production, and perfectly evoke early-60s Havana and NYC. Lisa Renkel’s digital-watercolor projections are seemingly straight out of a children’s book, and make up for the lack of set necessitated by festival limitations. Melissa Crespo’s fluid direction provides excellent pacing not only for the action, but also our emotions, and Sidney Erik Wright’s choreography is both clever and playful – I love the incorporation of Mary Martin’s famous “Peter Pan” stance.

And the cast is outstanding. As opposed to earlier versions (including one at FringeNYC 2015, and then a reading at last year’s NYMF) in which Pedro, Roger, and Wendy were played by (youthful) adults, here they are played by child actors. And these kids are amazing – all three will clearly be treading NY stages for years to come. The adults are great too – along with Heredia (Tony-winner for Angel in Rent) and Padilla, there is also Toro, who deftly illuminates both Tia Lily’s efforts to keep things as light as possible for Pedro, while still being honest about the difficulties he will face.

And it’s perhaps this – the combination of honesty and humor in a show about the immigrant experience – that is Pedro Pan’s greatest strength. Aparicio, perhaps taking a lesson from In the Heights, thankfully does not shy away from weaving healthy doses of Spanish into the script, yet even the gringoiest gringo won’t have the slightest problem understanding what’s being said. And the musical does an excellent job at appealing to everyone without overgeneralizing. To some extent, Pedro’s story is a familiar one – who, especially among NYMF attendees, hasn’t felt “alone” growing up? Yet rather than make the mistake made by so many musicals in their quest to be “relatable,” Pedro Pan is also resolute in its specificity, staunchly refusing to suggest that “We’re all Pedro!”

My only critique is that Pedro Pan still seems unsure about what it wants to be, an issue that is perfectly understandable for a NYMF show. It’s stuck between being a musical for schools and young audiences, and one that will go on to a more commercial run. Given the move away from having adults play kids, I’m guessing this is the direction the team is heading; if so, it might be useful for the writers to keep plumbing the incredible richness of this material. Whether this means digging more into the difficult politics of the time, or broadening the scope to learn more about Wendy and Roger’s journeys, or continuing the story to find out what happens to Pedro’s parents, or something else entirely, Pedro Pan has the potential to be a big Broadway hit. And I’m certainly hoping that happens, because Pedro Pan is the kind of show we, as a city and a country, need.