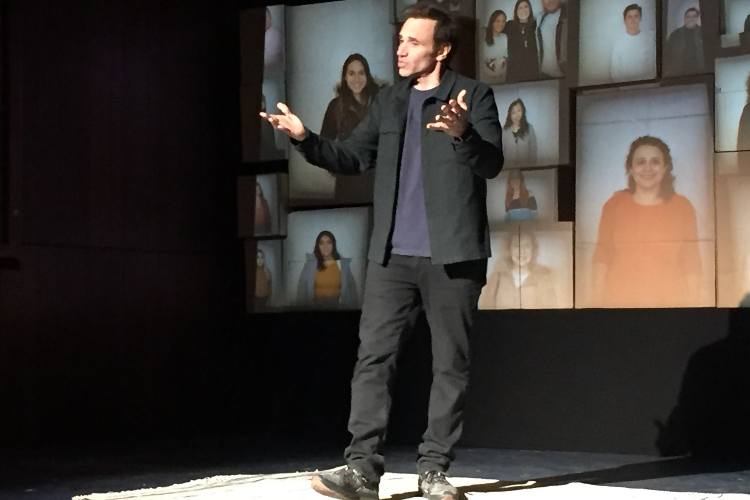 BOTTOM LINE: Comedian Paul Mecurio’s thought-provoking, unscripted show changes every night depending on the audience, who join him in sharing their stories.

As New Yorkers, are we closed-off, brusque and uninterested in sharing details, or are we simply waiting for the right person to ask the questions that get us to reveal ourselves? If you wonder where you fall on that meter or already have an opinion, comedian Paul Mecurio—an Emmy and Peabody Award-winner from The Late Show with Stephen Colbert and The Daily Show—will give you more to chew on as he tweaks his solo show to include the audience, which he welcomes on stage for stories that are funny, shocking, poignant, and fascinating. What’s even more novel is that—with a new group of attendees each night—Mercurio improvs and riffs along, with no one really sure how the evening will unfold.

This isn't just a traditional stand-up show, as I had thought when I first encountered it. I’d actually seen Mecurio warm up the Colbert crowd during the 2016 campaign, when Colbert did a series of live shows following the presidential debates. But once I learned what Permission to Speak entailed, I thought, from my seat in the front row, and with more than a little panic, “Oh hell, I bet I’m going to get picked!”

The first row actually offered up a bounty—Mecurio chose a guy in his 20s to start, ribbing him a bit about his studies and his family, who were with him. Later, when Mecurio interviewed the guy’s aunt, she wasted no time giving Mercurio grief about starting late. An Australian woman told a riveting story about how when she moved to New York for work she expected her husband to follow, only at the last minute he didn’t. Then there was the couple who at first seemed as if they would simply talk about how they’d met (online). But things took a turn as the man, a jovial sort, spoke about murder and death in his family.

Permission to Speak underscores just how readily people will start talking, and how unfiltered perfect strangers can be. Even when the stories get serious, Mecurio skillfully conveys curiosity and empathy without coming across as lurid or making people feel uncomfortable. It may also be that theatregoers feel safe because Mecurio creates such an intimate, welcoming space.

As for this Carnac the Magnificent, my prediction was right: he did pull me up. At least on the night I went, no one declined to join him on stage (apparently this happens occasionally). Mecurio and I bonded over law school; he worked as a lawyer years before getting his break writing jokes for Jay Leno. Fortunately, perhaps because of my whole deer in headlights thing, he kept it brief.

After the show, Mecurio chats with anyone who wants to meet him up close; it's telling that so many people remain. While I waited I spoke with the couple who had met online; it felt like we all had had a really special, moving experience. While it is impossible to know just what each night will bring, it is likely that, due to Mecurio's ability at giving people permission to speak, you will find surprising moments of connection, even if you just listen.

(Paul Mecurio's Permission To Speak plays at the Actors Temple Theatre, 339 West 47th Street. Tickets are currently on sale through February 2019. The running time is 75 minutes with no intermission. Performances are Wednesdays at 8; no show Wed 1/2, but there is one Thursday 1/3. Tickets are $50. For tickets visit telecharge.com or call 212-921-7862.)