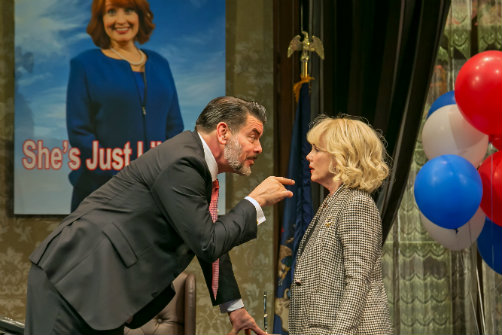 Burke Moses and Julia Duffy in The Outsider. Photo by Jerry Dalia.

American politics has rarely been a clean business, but since the last presidential election, it’s become a particularly dirty one, and as we have now learned, one in which all bets are off. Playwright Paul Slade Smith mines the absurdity of the current landscape for laughs in his new play The Outsider. Lieutenant Governor Ned Newley (Lenny Wolpe) is suddenly thrust into the national spotlight when he becomes Governor after a scandal sidelines his predecessor. Newley is such a non-entity that he only has his Chief of Staff Dave Riley (Manoel Feliciano) in tow. Like his boss, Dave is an anomaly in politics: earnest, genuine, and only wanting to do good. Joining them is the inexplicably confident temp Louise Peakes (Erin Noel Grennan) who says whatever comes into her head, and (of course) isn’t good with names or working the phone. The catch—the painfully shy and awkward Newley has zero interest in the job.

Since Dave has never worked with any candidate who has ever won, he brings in Paige Caldwell (Julia Duffy), a skilled pollster who has reached out to legendary hack Arthur Vance (Burke Moses). Paige and Arthur both see great potential in the new governor, recognizing he has an authentic quality that will appeal to voters. Over Dave’s objections, they mold Newley into an “aw shucks” everyman in flannel for his first television interview with Rachel Parsons (Kelly Curran), who is accompanied by A.C. (Mike Houston), her cameraman of few words. But when filter-free Louise unself-consciously joins them on the couch and generates a huge favorable response from the public, a light bulb goes off. Arthur and Paige realize Louise is really what voters are after and start putting their masterful machinations to work behind her.

Smith gets well-earned laughs with his script, especially with inept Louise, the worst temp in history. Grennan is terrific, artfully playing her as a character who should not be working in an office, or really anywhere, but is completely untroubled by that fact. Best known for her work in television comedies like Newhart, Duffy’s well-honed dry delivery provides a welcome balance as the show becomes more over the top. Felciano has the least flashiest part but is an excellent straight man and a needed voice of reason. He and Curran are very winning together as the somewhat hardened journalist is alternately confused and charmed by Newley’s exceedingly honest right hand man. Moses, blessed with a booming voice, makes for a commanding stage presence. He deftly plays Arthur as a somewhat oleaginous puppet master who is so enthusiastic about working with Newley and Louise that you almost forget how manipulative he is. Wolpe is endlessly entertaining as Newley evolves from someone who is almost pathologically timid to a governor of substance.

Smith has a good ear for farce, although as Louise’s campaign becomes the focus, some of the writing suffers, becoming jokier when a sharper edge would work better. I appreciate that he includes a scene about the responsibility Arthur and Paige have to the voters, but this bit is too rushed. But guided by director David Esbjornson, the on-stage antics don’t stray into slapstick, and although the show seemed to run long on opening night, it never dragged. Although The Outsider isn’t hard-hitting satire, perhaps the real-life maelstrom means people need a gentler approach right now. Certainly going by the audience’s constant laughs, this show hits the mark.