Written, Directed and Designed by Andrew Schneider
Part of BAM's Next Wave Festival 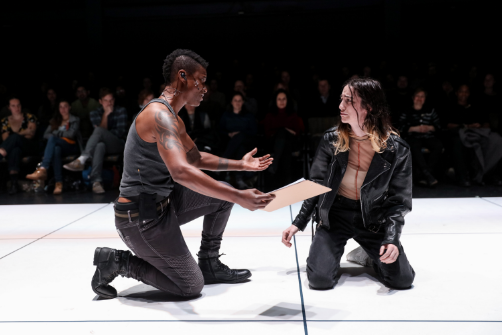 BOTTOM LINE: This technological marvel with an incredibly successful lead performer is necessary shock therapy for every millennial.

Nobody ever has time for a survey on the street, especially if the questions are along the lines of “How jazzed are you about the state of the sun?” and “How many lovers do you currently have?” NERVOUS/SYSTEM invites its audience to see the world from a perspective of a pollster who becomes an unexpected and poetical allegory of a modern urban millennial. T.L. Thompson (who uses the pronouns they/their) nails the lead character in this experimental theatre piece, written, directed and designed by Andrew Schneider. But it is the tech, namely lighting and sound, design that steals the show. I came out of the theater shaking as if I’d been shocked a dozen times. But the visceral physical experience is so meticulously designed, and so seamlessly woven into the narrative, that I would gladly subject myself to this electric chair of a play again.

We first meet the main character through their voice, reading from a long list of questions. The stage area between two opposite sections of the audience is empty. Only slivers of light are thrown across it from behind the wings, turning on and off with a click, like slide projectors in the hazy air. This hypnotic dance of light goes on for a while, contrasted by the soothing voice of Thompson. The warmth, liveliness, flirtatiousness and power embodied in their timbre will keep clashing against the mechanization of life throughout the show, which balances between theatre, performance, and light/sound installation.

It’s hard to put a finger on what exactly happened to the unnamed pollster, but something broke inside of them. In the myriad half-encounters on the street, they met somebody and then somebody went missing. There might have been a mass shooting at a party, or a plane crash. And maybe others might be more successful in piecing this story together. But the choppy structure is timely and atmospheric—of value by itself. The less-than-a-minute-long scenes race as swift as thoughts. Sharp blackouts cut off dialogue and TV announcements mid-sentence. But these aren't your regular cozy blankets of darkness, descending softly like in most theater. Schneider’s darkness is that of a black hole, of nothingness, and it feels like the air is sucked out of the room along with the light for a second or two. This must be how a sudden loss feels.

Something is eating the protagonist, as their life feels like “a list of what’s happening with no emotional connection to it.” But according to their shrink, it’s just a sign of our time; everything else appears to be normal. The stage gets emptied of scarce furniture after each of the many psychotherapy sessions during the “blink” of darkness. And then, under the penetrating white light, the street life resumes, portrayed by the cast members storming across the stage. A girl in a wheel chair runs away from her aide, a hipster comes from a grocery store, a woman falls down unconscious and unnoticed: it's the flow of city life, surreal and familiar at the same time. This same sequence is performed every single time with vigor and precision.

It’s hard to tell if we are in a groundhog day of the depressed pollster’s monotonous life or if we are stuck in their head, scrolling through the memory of one day over and over again, the day of the encounter with another person (Kedian Keohan, who also uses they/their pronouns). The song bleeding out of their headphones has its own rhythm, making them invincible to the ever-rushing environment. The sound design plays an equally important part—its nuance and three-dimensionality is breath taking. At times the sound is so violent that it shakes the chairs; other times it is subtle and lyrical, like a soft song leaking out of somebody’s headphones. NERVOUS/SYSTEM is a case of sound design not simply enhancing the verbal narrative, but actually moving the story forward.

NERVOUS/SYSTEM is all about rhythm, patterns, and how we break them in order to preserve our human nature. The show is at times physically uncomfortable because of the lighting, especially during the second part of the prologue, when the rapid switches of complete darkness and the razor-sharp light are first introduced. However Andrew Schneider and his associate director Alicia ayo Ohs use this dramatic effect to the fullest extent. The ominous stop-motion scene of bodies laying face down is one of the most disturbing and hauntingly beautiful things I’ve seen lately.

(NERVOUS/SYSTEM played at BAM Fisher, 321 Ashland Place, December 12 through 15, 2018. The running time was 70 minutes with no intermission. Tickets were $25. For more information visit bam.org and andrewjs.com.)