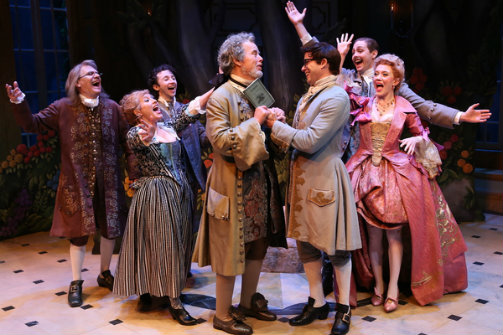 Alexis Piron, the mind behind the source material La Métromanie (loosely translated to mean crazy for poetry), was a bit of a playwright bad boy in his time, penning Ode To The Penis (Ode à Priape), which, according to the program notes, was what got the attention of playwright David Ives. A little backstory—Piron got himself into trouble with his hit play, which was inspired by an actual scandal in which Voltaire declared his love for a poetess who turned out to be the fictional alter ego of a failed male poet. Fifteen years after La Métromanie was produced, Piron was nominated to the Académie Francaise. Voltaire, already a member, got his revenge by making sure King Louis XV vetoed Peron.

Adapting French comedies is something that is firmly in Ives’s wheelhouse. Ives has updated other forgotten French verse comedies—The Liar, The School for Lies, and The Heir Apparent—his talent for taking a 300-year-old French soufflé and whipping it into a lusty Americanized tart, with rhyming couplets and modern winks, is in full force here.

In this version, the wealthy Francalou (Adam Lefevre) is an aspiring poet who has written a show poking fun at his daughter Lucille (Amelia Pedlow), a lover of poetry. Francalou has cast Lisette (Dina Thomas), Lucille’s maid, to portray her, and has invited 100 potential suitors to his home to see it. According to Lisette, the sharpest member of the household, Lucille is “pathologically aloof” and she does a dead-on impression of Lucille’s Valley Girl-esque “whatever”s.

Added to the mix is Damis (Christian Conn), a feather-brained poet in love with a poetess he has never met. One of Damis’s favorite subjects is sheep, a topic that makes Lucille swoon. Damis is accompanied by his valet, Mondor (Adam Green), the smarter of the two by far and the audience’s guide through the antics, who winningly catches everyone up after intermission. Damis’s friend Dorante (Noah Averbach-Katz) arrives in pursuit of Lucille, and tries to woo her with Lisette’s help. Like Mondor, working-class Lisette is sharper than the upper crust fools-in-love around her. After three of Francalou’s performers drop out, for one reason or another, he recruits Damis and Dorante, leading to plenty of mix-ups and characters incognito. This all only gets more complicated with Francalou’s third replacement—Damis's uncle Baliveau (Peter Kybart), who has come in hopes of having his nephew imprisoned after ten years of spending his money and not practicing law.

In addition to the hilarious shenanigans, there are several stand-out moments of staging. When the female characters want to slap one of the men, they yell out “Slap!” and the men physically react accordingly. And there is a very funny sequence between Damis and Dorante, when the two imbeciles are going to duel and take exaggerated steps toward, and then on top of, one another.

The cast is uniformly excellent with great comedic timing, from Pedlow practicing Lucille’s absurd pouty lips to Kybart’s rehearsing Baliveau’s off-stage bellowing. But my favorites are Dina Thomas and Adam Green. Thomas brings snap and spark to Lisette, who is both romantic mastermind and conspirator as she switches between playing herself and Lucille on a moment’s notice. And Green’s delivery is spot-on, and terrific fun to watch as Mondor snarkily takes down the dopey Damis, romances Lisette, and heartily enjoys Lucille’s company when she thinks he is not the valet.

Acclaimed veteran Michael Kahn expertly runs a tight ship, keeping the show to a breezy two hours, no easy feat with a cast of seven employing double or triple fake identities as the characters are partnered and split up, and imagined betrayals are avenged. James Noone’s gifted set design transforms the stage into a French ballroom decked out with a vibrant, artificial forest for Francalou’s play. Murell Horton’s delightful period-perfect costumes add more bursts of color, in particular Dorante's purple ensemble and the matching, eye-catching pink gowns for both Lucille and Lisette.

It’s rare that writing leaves me in awe, but I am justifiably impressed by Ives's ability to rhyme so artfully and masterfully. Who wouldn’t love a writer who pairs “incognito” with “libido” and “dandies” with “deafening candies.” Comedy, and especially farce, can veer into slapstick or go overboard. Here, you’ll have a purely naughty, riotous time.