My Life on a Diet 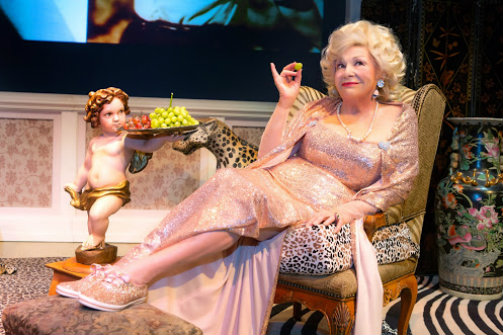 Renée Taylor in My Life on a Diet. Photo by Jeremy Daniel.

BOTTOM LINE: Fans of Renée Taylor and Joseph Bologna's bawdy brand of heartfelt humor will lap up this entertaining encounter with comedy royalty; others might not find it as appetizing.

My Life on a Diet is the theatrical equivalent of dessert—sweet, frothy, and perfectly fine with not being a main course. Sure, it’s not The Year of Magical Thinking, but it doesn’t want to be. This seriocomic memoir of Renée Taylor’s life in show business, performed by Taylor herself and co-written with her late husband Joseph Bologna, packs plenty of laughs in an entertaining 90 minutes, with some dollops of poignant emotion on the side.

An obsession with food and diets forms the show’s central organizing principle. Right at the top, Taylor—who is perhaps most famous for her role as wise-cracking serial eater Sylvia Fine in The Nanny—expresses her love for food, proclaiming: “I am a food tramp—that is someone who eats around.”  But almost from the moment she was born Renée Wexler in the Bronx, Taylor was pushed on a diet. Her mother was obsessed with movie stars and their wacky eating regimes, which are enumerated in fun projections designed by Michael Redman. When Taylor discovered the lure of the stage in elementary school, she also discovered a new pressure to diet. Her mother told her “she’d have to be thinner to star in the plays,” and she starved herself from a size 18 to a size 12 to star in The Madwoman of Chaillot.

As Taylor climbs the ladder of show business—with plenty of setbacks on the way—faddish diets come and go, as do encounters with various legends. In one memorable moment, Taylor describes taking Lee Strasberg’s famed acting class alongside Marilyn Monroe, whom she asked for grooming and diet tips. Monroe told her to eat a lot of grapes, and to slather herself with Vaseline before taking a hot bath to get translucent skin. In typical Taylor fashion, the advice doesn’t go as planned. Taylor recalls, “I took hot baths with my body Vaselined, hoping to look like her. But I kept sliding under the water in the tub.”

Taylor’s discussion of her classes with Strasberg highlight a conflict that is never quite resolved through the somewhat meandering course of the evening—her desire for fame, pitted against her need to be an artist.  As Taylor explains, after years of studying acting, her big break comes from telling funny stores on Jack Paar’s The Tonight Show, and she quickly gets another gig performing sketches on Perry Como’s Kraft Music Hall. She appears to have it all, but she wonders "Can't I be famous and an artist?" Lee Strasberg, dismissive of her funny stories, tells her "Yes, but not in that order."

Throughout the evening, there are glimpses of Taylor’s serious acting credentials (she recites Shakespeare and Giraudoux), but these are eclipsed by her comedic star turn telling her own life story. Without spelling it out, we can see that Show Business conquered Art, but there is still an art to her polished show business image. The play's central premise is that ultimately, diets didn't help create this image or bring the happiness they promised, but throughout the evening, I longed for a moment or two of direct engagement with the issues of appearance, the pressure to be thin (especially for women), and body shaming.

Taylor's narrative takes a more serious turn when she describes meeting Joseph Bologna, the writer-actor who becomes the love of her life. Their relationship endures for 52 years, and leads to marriage, a child, Broadway plays, an Emmy Award, and an Oscar nomination for their screenplay Lovers and Other Strangers.  The show’s most poignant moments come from her memories of Bologna, who directed the show and passed away last August. Taylor cannot disguise her grief, even as she recalls the joy of their wedding and working together.

Taylor reads the script from an animal print holder on a Baroque desk accented with even more animal print accessories.  (The unexpectedly lavish set, designed by Harry Feiner, is a collision of French Baroque opulence with leopard and zebra). The reading can sometimes drain the urgency, but not the comedy, of the script. Taylor is a master joke-teller, particularly with the slow comic burn after a hoary pun or self-deprecating punchline. If you’re not an ardent Taylor fan, you might find the 90 minutes a bit long, as all those memories of meeting stars and going on diets can get repetitive. But on the night I saw it, none of that mattered—the house was packed with an eager crowd of fans who broke into an enthusiastic standing ovation at the end, basking in the golden glow of their idol. All in all, the show is much like Taylor herself— ebullient, entertaining, with a soupçon of something complex simmering beneath the showbiz bluster.

(My Life on a Diet plays at Theatre at St. Clement's, 423 West 46th Street, through September 2, 2018. The running time is 90 minutes with no intermission. Performances are Wednesdays at 2; Thursdays and Fridays at 7; Saturdays at 2 and 7; and Sundays at 3. Tickets are $65 and are available at telecharge.com or by calling 212-239-6200. For more information visit MyLifeonADietPlay.com.)