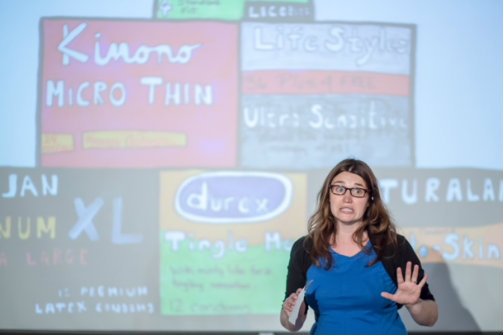 BOTTOM LINE: A heartfelt, honest meditation on one woman’s choice to pursue (and reject) motherhood.

Steeped in individual preference, societal pressure, and political implication, the choice to have children may be considered one of the most complex decisions of a woman’s life. Though a woman’s maternal drive is often presupposed, the choice is ultimately a personal one, and those who deviate from the sanctioned route frequently face scrutiny or stigma. As one such woman, writer-performer Stacey Vespaziani chronicles her experience in mOTHER: a play, reflecting on the circumstances leading her to ponder, question, and ultimately reject the path of motherhood.

Taking us from her childhood to the present day, Vespaziani describes her lifelong ambivalence towards motherhood, from early pubescence and comically mishandled sex education to adolescent experimentation and discomfort with the sexual and gender norms of her Catholic upbringing. However, after marrying her college sweetheart and witnessing close friends become fulfilled mothers, Vespaziani decided to try for children. This journey, however, was fraught with difficulty, as early attempts were curtailed by a twelve-week miscarriage, then sidelined when her husband developed multiple sclerosis. Grieving and thrust into a caretaker role, Vespaziani found solace in various communities, from the support of her yoga and wellness colleagues, to fellow bloggers’ replies to, and solidarity with, her accounts of the healing process. These friendships, and the support and insight they offered, helped Vespaziani accept her true desires and abandon her quest to conceive.

Vespaziani navigates mOTHER’s topics with humor and awareness, owning her story while respecting its limits. Supplemented by LA Finfinger’s cartoonish projections, her tales of menstrual mishaps, birth-control errors, and awkward facts-of-life talks (including a standout portrayal of a harried health lecturer) provoke equal laughs and winces. The account of her miscarriage is heartrending in its simplicity and wider implications: Vespaziani is quick to underscore its parallels with, and sociopolitical divergences from, abortion procedures and postnatal care, but admits it would take another play to give these subjects their full due. Likewise, a beautifully descriptive monologue highlights her love for her ailing husband and the pair’s reverence for each other’s aging, fallible bodies. Personal convictions notwithstanding, Vespaziani acknowledges the impact of outside judgement (a manicurist’s triggering comment; her family’s projected guilt), and honors the courage and dedication of the mothers she knows—many of whom did not have the luxury of choice.

While Vespaziani’s narrative carries the show, she encounters some difficulties in depicting other personas. Her use of prop glasses and vocal shifts to indicate separate characters do not lend themselves to the sharpest transitions, and the mid-show introduction of godlike, pre-recorded voices of judgment seems slightly out of place. Such challenges are not uncommon to solo shows, and nod to the thematic blurring of personal belief and social messaging, but clearer delineation might strengthen her desired effect. Additionally, given the piece’s emphasis on individual choice, references to others’ maternal experiences would benefit from just a bit more fleshing-out.

In an age where personal and political agendas are increasingly entwined, and women fight to maintain control of their bodies and rights, mOTHER is a testament to individual agency and a reminder that love and nurturance can take multiple forms. Though our paths may diverge from convention, there exist many ways to be female, and human, in this world.