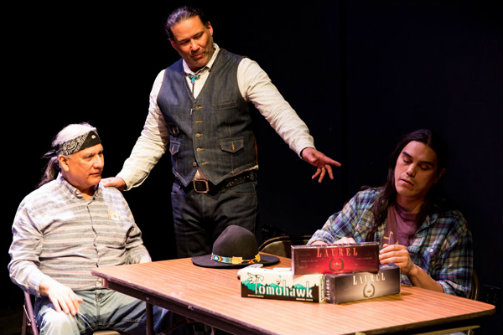 BOTTOM LINE: A moving play about the involvement of Native American ironworkers in the cleanup after 9/11.

2018 seems like a good time to take another look at the way we view history. Much like the way Hidden Figures revisited the women of NASA, Dawn Jamieson’s Mangled Beams takes another look at the heroes of 9/11, or specifically, the ironworkers who came to help with the cleanup after 9/11. Specifically, the Native American ironworkers—the Mohawk high beam walkers, whose ancestors built New York City’s skyscrapers, were integral to the cleanup after 9/11.

Directed by Christen Omantra Callahan, the first act of Mangled Beams is set in a union hall, introducing the audience to our main characters as they all beg for work from Sal (Mike Pirozzi), the racist foreman who controls the list and doesn’t want to send any Native Americans (Indians, he calls them, among even worse names) out on jobs.

Brad (Denny Desmarais) is a career ironwalker with a troubled past. With a history of alcohol abuse, Brad is looking to get back into the workforce to get his life back together. Brad’s brooding brother Dave (Dylan Carusona) has spent some time in prison and is also looking for some work to get him back on the right path. Greg (Greg Seage), boyfriend of Brad’s sister Becky (Maeve Crispi), is also in the union hall, scrounging for work.

We can immediately distinguish personality types in how the characters react to this situation. Greg rebels against Sal's discriminatory attitude, and announces that he'll go on the radio to talk about how they are being shafted because of the color of their skin. Dave, not a card-carrying union member, instead bribes Sal to get in the room, hanging in the background. We can also see tension build between the brothers as we come to learn how each person ended up in the union hall that morning. The second act focuses on the aftermath of 9/11, charting how everyone gets involved in the clean-up and initial recovery efforts. Every character clearly thrives when they’re doing what they love, whether it’s iron and construction work, nursing, or talking to television journalists.

Jamieson's script seems to dwell on Brad, giving us lots of information about his back story. But I was particularly interested in the characters of Becky (Crispi) and Dave (Carusona), and their interactions and history. Yet all the actors have presence and give engaging performances. And the set design by Dedalus Wainwright is simple yet arresting. The tables and benches in the first act give way to the particularly striking beams used as sculpture and set pieces in the second act. These images of the beams still resonated with me days after the performance.

Mangled Beams has been developed in several notable institutions, including the Lark Play Development Center and the Public Theater. And it's produced by AMERINDA (American Indian Artists Inc), the only multi-disciplinary arts organization in the NYC area that elevates traditional and contemporary forms of Native American art. Yet while Jamieson's skill as a playwright is evident, I think the script would benefit from further refinement. Although perhaps the current design requires an intermission, I’m not sure Mangled Beams needs to be two acts, especially with such a long first act. Mangled Beams is well structured and the characters are clearly defined, though I couldn’t help but wish it moved faster at the beginning. Considering that this is billed as a story about 9/11, it’s hard to be completely engaged in a story about a waiting room when you know what’s going to happen later that morning.