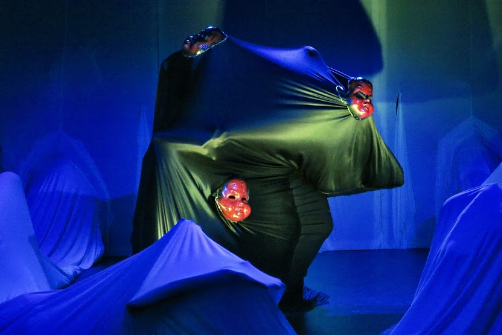 The Witches in MacBeth. Photo by Jonathan Slaff.

How to make a Macbeth that feels really original? The key ingredient, it turns out—and how could we not have known before?—is spandex. Lots and lots of spandex.

First Maria Ensemble’s visually stunning production, designed by Raffaella Toni, transforms the teensy-tiny blackbox of Teatro Circulo into a veritable river of billowing fabrics beneath which the cast, completely enmeshed, strains for freedom. As the bloodthirsty thane Macbeth hacks his way to power, the waves of white fabric—and the killers’ costumes—slowly turn red.

Frightening images abound in this Macbeth, eerily lit by Pamela Kupper. Three glowing red masks on a teeming mass of black cloth represent the Weird Sisters. In her sleepwalking scene, Lady Macbeth (Celeste Moratti, also artistic leader of the company and this show’s wildly creative director) cradles a bundle of red silks in her arms, the unspooled remnants of her absent child trailing behind her as she wanders away. The bodies of Banquo and Duncan, buried beneath still more spandex, become an amorphous banquet table.

At times, the freaky featureless faces clawing from beneath the fabrics recalls the Upside Down of Stranger Things or the Hall of Faces in Game of Thrones, but it’s also a uniquely creepy aesthetic, especially when paired with Francesco Santalucia’s ritualistic, dissonant choral writing (accompanied stirringly by Santalucia and the mononymous Papaceccio on a variety of percussion instruments). It’s all wholly engrossing until, well, it isn’t.

The problem with this Macbeth? Moratti allows the chants and fabrics to do far too much of the heavy lifting. There’s not anywhere nearly as striking or clear a unifying vision during those extended scenes that rely solely on actors’ interpretation of text. And if Moratti’s own “Unsex me here” speech is probably the most riveting I’ve ever seen, that’s because of the writhing spirit beneath the spandex in front of Lady Macbeth and not because of any particular clarity in the treatment of the role.

With the exception of a wise and often funny reading of the doomed Banquo from Audrey Tchoukoua, the performances play bland second fiddle to the ambience. Despite the skillful handling of the verse from most of the cast, all these bellowy Scots come across as pretty much indistinguishable from one another. There’s a bit of chilling panic in the aftermath of Duncan’s murder as the Macbeths cover up their assassination, but Tristan Colton, while deftly handling the poetry, never convincingly portrays Macbeth’s ambivalence about seizing the throne for himself.

And the now-requisite breaking of the fourth wall by the Porter (John Hardin, better in an early, harrowing speech as a dying soldier) breaks the mystical spell in a manner that feels self-defeating rather than self-aware (“Knock knock? Who’s there? Ferris. Ferris who? Fair is foul and foul is fair”). Even with its running time of just over two hours, this is one Macbeth that could benefit from some more trimming.

In its visual and sonic newness, First Maria’s MacBeth most reminded me of the Polish company Song of the Goat Theatre’s Songs of Lear (which I caught at the Yale Rep in 2015): that astounding production gave King Lear over entirely to an innovative, guttural choral score that sparingly quoted Shakespeare but committed whole-heartedly to conveying the play’s emotional core through an interdisciplinary form.

From the moment Macbeth meets the witches, he’s entirely in their grip, unable to look away. It’s too bad these particularly mesmerizing spirits loosen their grasp partway through. But in the moments when the First Maria Ensemble fully entrusts Macbeth to the spectacular world created by the sounds and spandex, there’s really nothing like it.

(MacBeth played at Teatro Circulo, 64 East 4th Street, through December 21, 2018. The running time was 2  hours, 15 minutes with an intermission. Performances were Tuesdays through Saturdays at 8 and Sundays at 2:30 and 8. Tickets were $25. For more information visit firstmaria.com.)