By Lizzie Vieh; Directed by Maria Dizzia
Produced by Amios

Off Off Broadway, Play
Runs through 3.10.18
The Flamboyán Theater at The Clemente, 107 Suffolk Street 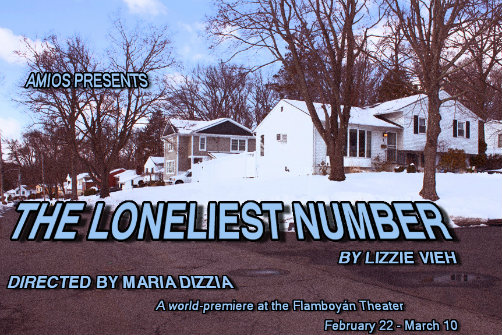 BOTTOM LINE: Lizzie Vieh explores the side effects of side pieces in her poignant and exciting new play.

To misquote Woody Allen, the characters in The Loneliest Number are reticent to join any threesome that would have them as participant. After five years and eight months of marriage, John and Wendy (Zac Jaffee and Leigh Williams) are bored. They’re in a “vortex” where their monotonous lives have stripped away intimacy and excitement. In theory, their solution is simple: bring in a “third” once a month. He chooses one, then she chooses one, on alternating months. This way, no emotional attachments will form, they have a clear exit strategy with each new sexual partner, and they can inject their marriage with a potent dose of novelty.

We meet Wendy and John a few months into this new experiment. It’s Wendy’s turn, and she chooses her eccentric coworker Kevin (Justin Yorio) as their flavor of the month. Kevin unexpectedly derails their “no strings attached” narrative when he reveals his love for Wendy. That’s not allowed in this arrangement, so Kevin is out. Fast-forward to the next month, where John has picked the alluring Arianne (Cassandra Paras). But something isn’t sitting right since the Kevin episode. Wendy and John’s bond is weakened and feels like it might crack any second.

At the center of their relationship crisis is deep, deep sadness. John is battling infertility and a looming prostate cancer diagnosis. Wendy is still grieving her dad’s suicide; her feelings of abandonment come across beautifully in Williams’ portrayal of this conflicted character. In a particularly moving moment, Wendy asks Kevin to bite her tattoo of her dad’s name and date of death. The painful intimacy of this vignette encapsulates the mood of the disillusioned couple and the general despondency of the play. That being said, it’s worth noting that Vieh is also a brilliant comedic writer. Notably, Kevin and Arianne’s lines are met with ice-breaking laughter throughout the piece.

The cast is adroit and clever across the board, although for a play that promises an insightful look into non-monogamy, the sexual chemistry is seriously missing. The standouts are without a doubt Paras and Yorio. As Arianne, Paras’ cool and comfortable presence is magnetic. Her choices are clear and audacious—definitely someone to look out for. Yorio tackles a character who, on paper, could be off-putting. Instead, Yorio makes him enticing, drawing us in with his odd delivery and strange mannerisms. Williams is wonderful in the leading lady role. She deals with Wendy’s inconsistencies by playing her as a well-meaning heart breaker with a broken heart. Finally Jaffee (the understudy for Maurice Jones, who usually plays John) is charming and tender—two qualities essential to understanding John’s journey.

The Loneliest Number is directed by the Tony-nominated actress Maria Dizzia (In The Next Room… and Orange is the New Black). Although this is Dizzia’s first directing credit, she handles the difficult piece with a smart and imaginative hand. Dizzia draws out of her ensemble a performance that carries the piece though her sometimes clunky transitions, like the distracting stagehand handling prop changes in half-blacks, and set changes that don’t quite work in transporting us from scene to scene. But the set, designed by Frank K. Oliva, is perfectly suited for the play. The Flamboyán is transformed into Wendy and John’s apartment, and the set invites us into their world—as up close and personal as it gets.

Vieh’s play is ready for a larger production. However, I was left with one glaring question: why are Wendy and John working so hard to save a marriage that seems so miserable? Beyond their intimacy issues, I wanted to see more about why this couple is putting themselves through this emotionally draining experiment instead of calling it quits. Clearly, Vieh is making a point about non-monogamy: that it is messy, and more of a lifestyle than a simple relationship-saver. As we witness John and Wendy fail hard and fast at their “no strings” game plan, we see how their ship is sinking. They desperately try to scoop out buckets full of water… but it seems even the buckets have holes.

(The Loneliest Number plays at The Flamboyán at The Clemente, 107 Suffolk Street, through March 10, 2018. The running time is 90 minutes with no intermission. Performances are Wednesdays through Fridays at 8; Saturdays at 3 and 8; and Sundays at 3. Tickets are $25 and are available at amios.nyc.)