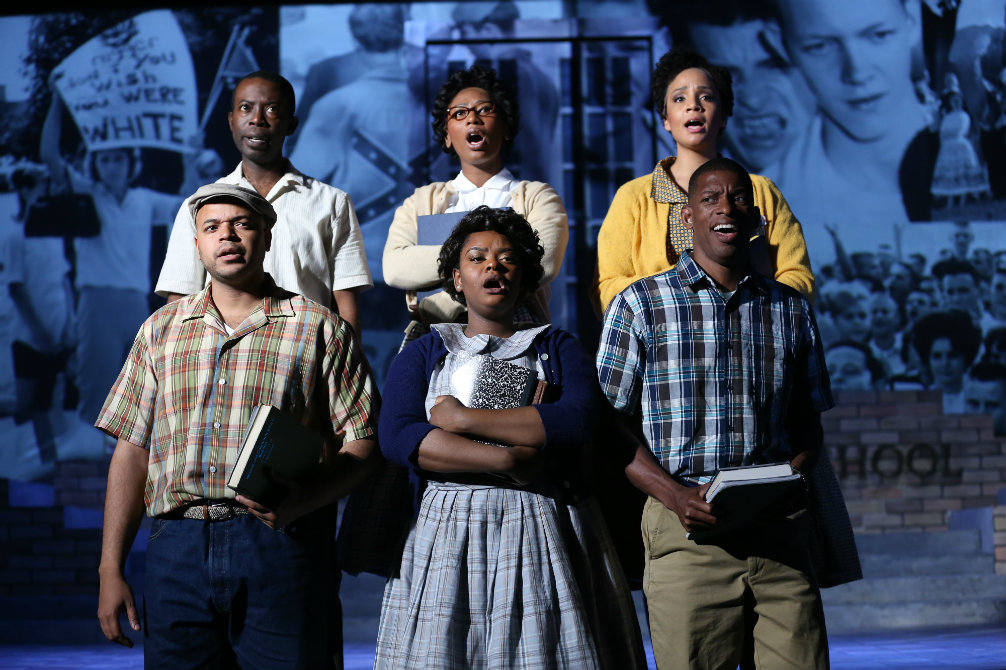 BOTTOM LINE: It's tough to criticize a work like Little Rock, about such an important part of this country's history, but the play itself is not always as impressive as the research that went into it.

At the end of Little Rock, the company sings a gripping "We Shall Overcome." It's difficult not to be moved by the photos of the original Little Rock Nine, the brave young men and women who risked their lives just to get an education, or be saddened by the thought of how racism is very much alive in this country and there is still so much to overcome. It's a powerful moment at the end of a frustrating play. As important as this history is to remember, it's not always dramatized here in the most effective way.

In 1957, nine brave students became the first African Americans to attend Little Rock Central High School. Although the Supreme Court's decision in Brown v. Board of Education declared segregation in public schools unconstitutional, Governor Orval Faubus tried to keep the students from attending school, calling in the Arkansas National Guard. President Eisenhower had to send in federal troops to escort the children to school for their safety. Playwright and director Rajendra Ramoon Maharaj spent 13 years interviewing members of the Little Rock Nine and various Arkansans. His diligence is admirable and I hope that he will record all this in a book, as there is probably a lot that didn't make it into the play.

In Little Rock, nine actors, both black and white, play over 50 roles, including many (but not all) of the nine students. Yet if this sounds like something akin to The Laramie Project, further editing would help focus our attention. Maharaj would have done better to focus on fewer students in more detail, so we could really get to know their stories. As it stands, we are just given snippets, not enough to get to know anyone on more than a superficial level. Minnijean Brown (Shanice Williams) loves singing and Pat Boone. Melba Pattillo (Anita Welch) dreams of playing Hamlet. Jefferson (Justin Cunningham) likes to tell jokes about states to diffuse the tension. These would be charming details if we had a more well-rounded picture. As a result, the play feels overly long and meandering.

The musical moments are by far the most memorable, thanks to the voices of the cast members and Darryl G. Ivey's vocal arrangements. Wendall Harrington's projections add a lot of the real history in photographs, reminding us why we can never forget what happened in Arkansas, and how far we still have to go.

(Little Rock plays at The Sheen Center for Thought and Culture, 18 Bleecker Street, through September 8, 2018. The running time is 2 hours 15 minutes with an intermission. Performances are Tuesdays through Thursdays at 7:30; Fridays at 8; Saturdays at 3 and 8; and Sundays at 3 and 7:30. Tickets are $41-$127 and are available at sheencenter.org or by calling 212-925-2812. For more information visit littlerockplay.com.)