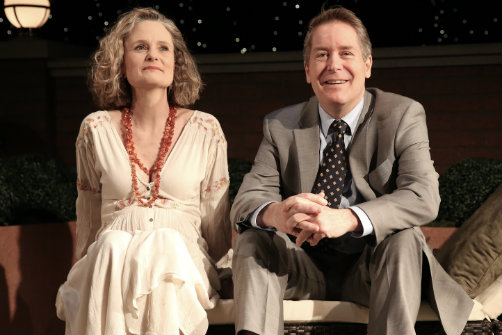 BOTTOM LINE: A.R. Gurney writes effectively about fear and regret, but unnecessary characters take away from the most interesting parts of the play.

With its twinkling lights and terrace furniture, the set of Later Life, designed by Steven Kemp, looks like a lovely place for a party. But as the guests discover, this New England soirée has some disappointments, as does this A.R. Gurney play, though it is not the fault of Jonathan Silverstein's delicate production for Keen Company.

The main focus is on Austin (Laurence Lau) and Ruth (Barbara Garrick), who had a connection 30 years ago, but never went past a brief flirtation because Austin's constant fear that something bad would happen kept him from going back to her place. Now they're getting a second chance. Their story is easy to relate to for anyone who has ever regretted anything in life, which is probably everyone. However, they keep being interrupted by other guests, all played by Jodie Markell and Liam Craig. This is frustrating for Austin and Ruth, just as it is for the audience. While we have to hear some characters go on and on, we don't see them again, so their stories don't mean much to us.

Still, costume designer Jennifer Paar and wig and hair designers Dave Bova and J. Jared Janas do an amazing job creating the looks for Markell and Craig so that each character is unrecognizable from the one before. Seeing their work almost makes these diversions from the more compelling heart of the story worthwhile.

Silverstein takes his time, which is fitting for a Gurney play, though it sometimes it feels slow. This may not be the most exciting play, but it does feel true to life. Sometimes we make mistakes. And sometimes the best part of the party is the view.

(Later Life plays at the Clurman Theatre at Theatre Row, 410 West 42nd Street, through April 14, 2018. The running time is 90 minutes with no intermission. Performances are Tuesdays through Thursdays at 7; Fridays at 8; Saturdays at 2 and 8; and Sundays at 3. Additional matinee on Wednesday, April 11 at 2. Tickets are $65, $80 premium, and are available at telecharge.com or by calling 212-947-8844. For more information visit keencompany.org.)