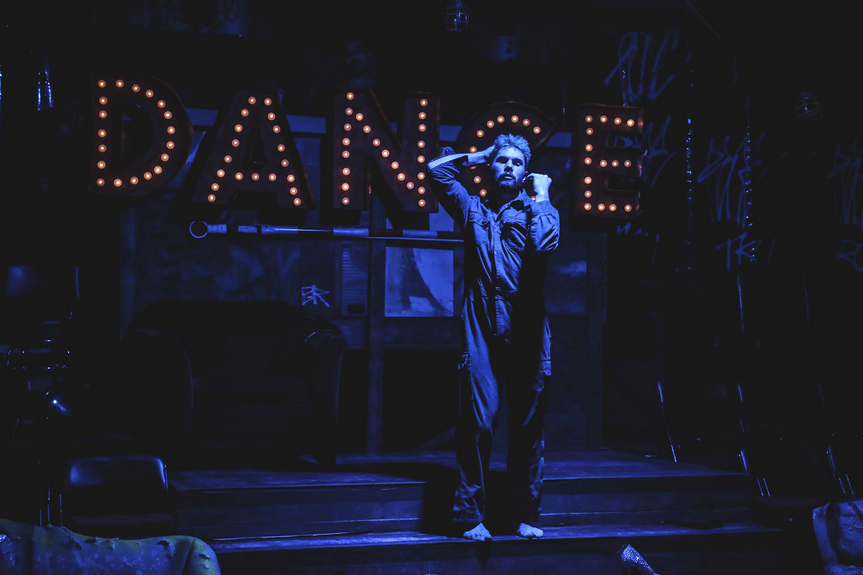 To get into the downstairs performance space where Kink Haüs is playing, one must whisper “a password” to the imposing door person; my whisper was not soft enough, and so I was chastised accordingly. But this is likely the only “abuse” you’ll receive at Gunnar Montana’s celebratory dance show. Once you’ve made it through the doors, the only remaining hazard is the detritrus-ridden stage—and even this gets cleaned up before the show begins.

The theatre is covered in graffiti and art that evokes art collective Gran Fury (most famous for their work for ACT-UP) and the 1980s East Village scene. But while garbage is strewn everywhere, as in a club that still hasn’t recovered from the debauchery of the night before, a janitor starts cleaning before the audience is fully seated. As the lights dim, in one of Kink Haüs’s many clever transitions, the janitor sheds his workday uniform to reveal bright-blue hair and a much more fabulous ensemble—like so many other blue- (and white-) collar workers who have a double life in underground queer culture. And so director-choreographer-artist-mastermind Gunnar Montana (who is also the blue-haired janitor-cum-prancing queen) welcomes us to his tour through gay culture.

What follows is a series of scenes, primarily dance-based, that chronicle different aspects of contemporary gay life. There’s a runway walk that would make RuPaul proud, a campy gym scene complete with treadmill and lots of thrusting, and another in which two club kids get coked up before heading out for the evening. There are multiple lip syncs, and also an extended voiceover about “how to be a homosexual man” (although I doubt anyone in the audience needed lessons), all tied together thanks to Montana’s fluid, even insightful, transitions. There are several ensemble dances, and also multiple solos, including one each for the two women in the company. After Stephi Lyneice lets the (human) dogs out, or at least off their leashes, she gets oiled up during a fascinating dance-slide sequence across a greasy floor. And later, Jessica Daley, with the help of a blowtorch, dances her way to freedom from being chained to a bathtub.

But it’s really the men who get the juiciest parts here. There’s Montana’s extra-camp lip sync to “God Bless America,” Dylan Kepp’s lessons in homosexuality, and Frank Leone’s solo to Robyn’s “Dancing On My Own” amidst a crowd of headless mannequins. Perhaps the most memorable is the hauntingly erotic pas de deux between Montana and Avi Borouchoff. After a rainbow-ribbon ensemble dance to “Holding Out for a Hero,” the music transitions to a creepily slow version of the song, and Montana stalks onstage, as if to gay-bash Borouchoff. As the two begin to meld together, Montana veers between succumbing to his desires and threatening to take his self-loathing out on Borouchoff. It’s a powerful, beautiful scene that underscores how the lines between eroticism and violence can often get blurry, especially in queer sex.

But there isn’t all that much sex (or even nudity) here. For those with more vanilla tastes, don’t let the title mislead you—Kink Haüs isn’t really all that kinky. Montana’s seriously legit choreography tends to overshadow the crazier costume elements, so the feeling is at times more refined dance performance, or else crazy camp fest, than it is edgy sex dungeon. Maybe the kinkiest element is the frequent use of dildos—as free weights, a microphone, and (my favorite) doggy tails. And surprisingly, there are no dancers of color here. Perhaps we in NYC have come to expect more diversity in indie theatre (Kink Haüs is a transfer from Philadelphia), or maybe this is Montana’s conscious attempt to comment on the whiteness of contemporary gay culture, but it’s a jarring note in this love-letter to sexual diversity.

That said, the entire evening is, like a great night out, over before you want it to be. As the sun comes up (the evocative glimpse of daylight—a terrific final visual—is courtesy of set and lighting designer Oona Curley), and the dancers leave, the bouncer returns to say words familiar to anyone who has met the morning in a darkened club—you don’t have to go home, but you can’t stay here.

(Kink Haüs plays at La Mama, 66 East 4th Street, September 20 through October 14, 2018. Running time is 1 hour. Performances are Thursdays at 8, Fridays at 8 and 10, and Saturdays and Sundays at 8. Tickets are $30, and can be purchased at lamama.org. Remaining shows are sold out, but there is a waiting list.)