By William Shakespeare; Directed by Gregory Doran
Produced by the Royal Shakespeare Company 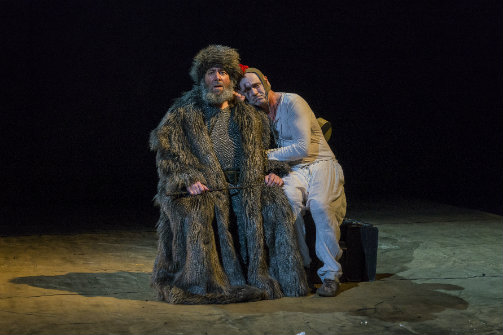 BOTTOM LINE: An expertly performed example of Shakespeare's lasting power, RSC's King Lear at BAM will delight any fan of The Bard.

When it has come time for Dad to relinquish his car keys and license due to matters of personal and public safety, what do you do? Does he recognize his declining faculties and give up these items of autonomy by his own volition, or is he being demanded to do? Which child will be getting the car, and thus the power, and are they motivated by genuine concern or hungry eyes? Who is self-aware, who is deluded; who is speaking from truth, and who is paying lip-service?

For those unversed in Shakespeare, the main plot of King Lear follows the aging King (Antony Sher) and his court as he announces his abdication from the throne and kingdom to whichever of his three daughters pronounces her love for him (equally if all three each pronounce). His eldest and middle daughters, Goneril (Nia Gwynne) and Regan (Kelly Williams), both proclaim their love, though their sincerity may be questioned. Yet Cordelia (Mimi Ndiweni), the youngest, refuses—she has shown her love all her life, and does not like her father's games. Furious, Lear banishes and disinherits her. When the Earl of Kent (Antony Byrne) speaks in her defense, he is banished as well. Lear then tries to live in his daughters' houses, but their machinations and strained patience, coupled with his own failing mental state, not to mention his retinue of rowdy knights, all lead him to be without a home in a raging storm.

There is a complementary subplot in which Edmund (Paapa Essiedu), the bastard son of the Earl of Gloucester (David Troughton), plans to take the lands of Edgar (Oliver Johnstone), his legitimate brother. Through a series of double crossings and a false letter, Edmund frames Edgar as a conspirator of patricide, and earns favor with his father and the court. This forces Edgar to disguise himself as a mad beggar, where he crosses paths with Lear and his retinue in the same raging storm. The rest of the play follows Lear’s fall into deeper mental and physical instability; Edgar’s journey to redemption, reclamation, and revenge; and the fates of the three sisters.

King Lear's themes of truth versus lip service and of human fragility—especially the fragility and decline of archaic ideas surrounding masculinity—are incredibly relevant today. Watching the ways leaders rise to and fall from power is clearly compelling in 2018. However, Gregory Doran's production does not go out of its way to force feed these themes to its audience, instead letting the text speak for itself, leaving the audience to be modernity’s interpreter. The audience must  meet this production halfway, in order to buy into its world. While this will be welcomed by someone who is already in love (or at least familiar) with Shakespeare's text, accessibility is not the main focus of this production.

Performance-wise, every company member plays at the top of their abilities. There’s that certain comforting thrill when you can feel, but are not distracted by, the skill and technique of each performer. Antony Sher is phenomenal as Lear, a role that demands bouncing from one extreme to another. Other knockout performances include Antony Byrne’s Earl of Kent, Oliver Johnstone’s Edgar, and Paapa Essiedu’s Edmund; as Goneril, Gwynne made me have moments of empathy for what could, in lesser hands, become a heartless character.

On the design side, Tim Mitchell’s lighting is wonderful, highlighting and magnifying certain moments like a camera’s lens. Some of the more minimalist aspects of Doran’s direction and Niki Turner’s set and costume design work well to bring focus to the words and characters, like the creation of an eclipse by using two metal discs suspended atop poles in the ground. At other times, the choice of certain design ideas overwhelms, and thus detracts from, the production. In Gloucester’s torture scene, the sci-fi feeling of the LED-lit plexiglass prison doesn't fit well with the industrial feel of the rest of the piece.

As one would expect from both BAM and the RSC, this King Lear it is essentially Shakespeare performed and produced really well. If you're one of those with an aversion to iambic verse, don't look to this to change your mind. But if you are already a fan of The Bard, you will have a fantastic time. The great performances and beautiful writing on themes with contemporary relevance will make the hefty run time fly by.