Off Off Broadway, Play
Runs through 6.9.18
Access Theater, 380 Broadway 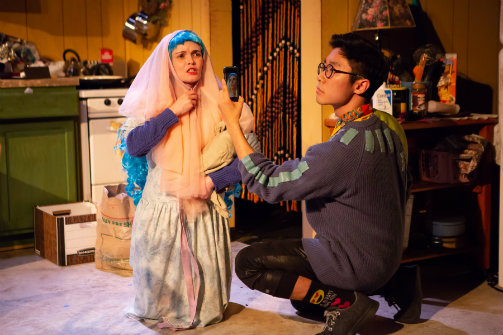 Reyna de Courcy and Samuel In in the hollower. Photo by Hunter Canning.

BOTTOM LINE: A cross-generational relationship between a bizarre teen and a depressed adult, told through an explosion of color, hallucinations, and wackiness.

I am guessing that Liza Birkenmeier is not especially interested in writing crowd-pleasers. Her new piece, the hollower, is irreverent and absurd, and her approach to material as ominous as mental illness, colonialism and abuse, is refreshing and striking. Think Unbreakable Kimmy Schmidt, with a lot less whimsy and a touch of acid.

We are introduced to the two main characters—Otto and Bit (Patrena Murray and Reyna de Courcy)—after a jarring flash of a lightbulb into a blackout. It’s unclear how Otto and Bit came to live together. Otto is a middle-aged, heartbroken lesbian nurse whose house is a complete mess (designed to perfection by You-Shin Chen). In her care is Bit, a sixteen-year-old cult survivor and “gifted student with executive function issues.” Bit wears bubble-gum colored wigs and neon harajuku-esque outfits. She spends the play perched up on a pair of leopard-print stiletto heels, giving her the shaky gait of a fawn (Max Archimedes Levitt's costumes are flawless). Bit and Otto’s dynamic is more that of passive-aggressive roommates than of caregiver and child as Otto is apathetic at best, neglectful at worst.

The play takes place over the course of Bit’s junior year “c-semester project,” in which students stay home and concentrate all their time on a single topic. Bit chooses to devote her time exploring the lives of the filles du roi: 17th-century women who were sent, on the French King’s dime, to New France (Canada). They were to populate the land, heretofore occupied primarily by bachelor fur traders. In particular, Bit is fascinated by the tale of one of the files du roi, who was burned at the stake after claiming she was having visions of the Virgin Mary, disguised as a pig.  Bit partners up with senior boy Wilkin (Samuel Im), whom she describes as “like the Polanski of claymation,” to work on her project. Though his talent with clay is undeniable, Wilkin is a difficult project partner. He shuts down Bit’s vision, encouraging her to stick to a more formulaic approach.

And then the play gets really weird. Otto is haunted by recurrent visits from the smarmy, menacing Pigman (Ryan Wesley Stinnett) and his silent assistant, Missy (ToriAnne DiFilippo). Their appearances are rattling and confusing. Otto can’t believe being a “middle-aged childless single woman” would make her eligible for the Pigman's attentions. It is clear that Otto is depressed. Her exterior symptoms are recognizable—her sweats, her lack of ambition, her drinking, the disarray of her house, her junk food consumption. But Birkenmeier takes us further, deeper. We see her miserably fail at creating a fruitful connection with Bit. Otto is inept at caring for this outlandish girl, and Bit craves exactly what Otto can’t provide: stability, guidance and healthy norms.

There is something absolutely captivating about the hollower. At its core, it’s a play of shipwrecked characters, stuck in a halfway home for burdened souls. I was also enthralled by Kristy Dodson’s directorial choices. Her ambition is boundless and she pulls off some magical moments of stagecraft, rarely seen in Off Off Broadway theatres. She resists pushing the absurdism of the piece too far, instead allowing us to accept the bizarre reality of these despondent characters.

De Courcy plays the elusive Bit with biting humor. Her physicality and voice do wonders for creating a teenager that feels both familiar and alien. As Otto, Murray plays it a little safe and stiff, though her voice is an effective, calm counterpoint to the play’s more frantic characters. Stinnett, as Pigman, plays a convincing, slick conman with great comedic timing. Im pulls off the ambitious, obnoxious Wilkin with charm.

The characters and their performances—all under stealthy direction—make the hollower something special. Though it does suffer from a few too many ideas and unresolved questions, it is innovative and touching. It's a play for daring audiences—as in, I dare you to go see it.

(the hollower plays at Access Theater, 380 Broadway, through June 9, 2019. The running time is 90 minutes without an intermission. Performances are Wednesdays through Fridays at 8; Saturdays at 2 and 9; and Sundays at 7. Tickets are $25-$30 and are available at newlighttheaterproject.com.)

the hollower is by Liza Birkenmeier. Directed by Kristy Dodson. Set Design is by You-Shin Chen. Lighting Design is by Carolyn Wong. Sound Design and Music Direction are by Andy Evan Cohen. Costume Design is by Max Archimedes Levitt. Stage Manager is Lindsey Hurley.