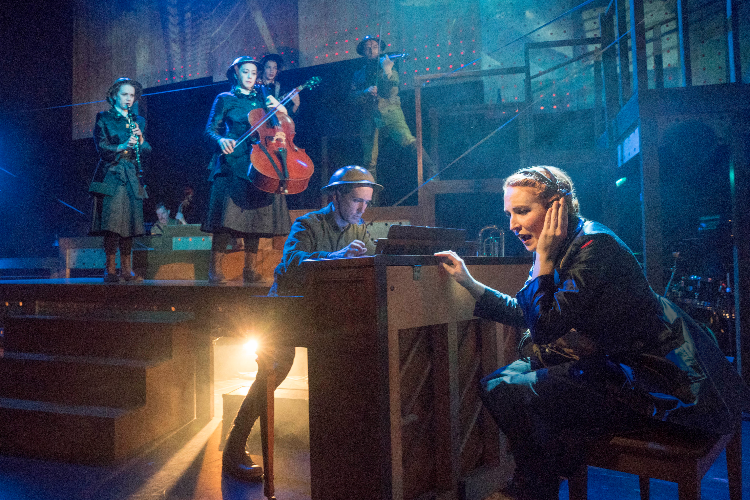 Jeannette Rankin, a Republican from Montana, was the first woman elected to Congress and the sole legislator to vote against entry into World War I. Her outspoken opposition to military carnage—famously expressed by the quip that “you can no more win a war than you can win an earthquake”—situated her squarely within the ranks of the era’s pacifist community.

That this was a minority opinion goes without saying, but it is nonetheless unfortunate that it gets nary a mention in The Hello Girls. Yes, most Americans cheered the entry of U.S. combatants and wanted nothing more than to crush Germany; indeed, most folks stuck on the domestic fringes did what they could to support the war, from raising money to crafting programs to boost the morale of “our boys.”  Still, religious and secular opposition to U.S. engagement was evident, and outspoken activists were both visible and vocal about the folly of armed conflict.

Rather than debate the efficacy of war, The Hello Girls focuses on the fact that it was initially men, and men alone, who were sent into service, something that rankled early 20th-century feminists who wanted to prove their loyalty, patriotism, and intellectual mettle. After all, they reasoned, what better way to demonstrate their readiness for the franchise than to fight a war? Their opportunity came in 1918 when General John J. Pershing issued a request for female switchboard operators to field calls in French and English, a task that men resented being assigned and seemed destined to blunder. More than 5000 women applied for the positions; over the course of the war, 223 served and managed a staggering 26 million calls. Their story is remarkable.

The Hello Girls—the nickname was derived from their “hello, how I can I direct your call? greeting—mines the real-life experience of five operators, one of whom, Grace Banker (well played by Ellie Fishman), became their Chief. The story is told through 19 original songs, with minimal dialogue. Each actor doubles as a musician, playing accordion, bass, clarinet, drums, guitar, piano, violin, and xylophone in addition to belting a tune. They’re all terrific—not only excellent actors but wonderful singers, dancers, and story-tellers.

Lianne Arnold’s evocative set and projection design, Christine O’Grady’s choreography, and Ben Moss’s musical direction make this a rousing and enjoyable piece of theater, at least if you don’t analyze it too deeply. As you probably suspect, my critique centers on the politics, not the stage work—the latter is absolutely stellar. Certainly, I was glad to see some previously little-known history, not to mention a spotlight centered on the overt sexism the women soldiers faced. Perhaps predictably, although Banker was awarded the Army’s Distinguished Service Medal, it took almost 60 years, until 1977, for Congress to grant the actual Hello Girls veteran status. By then, only 33 were still alive to receive an honorable discharge. It’s enraging. At the same time, the musical’s unquestioned support for militarism and its gung-ho endorsement of violence seem cavalier at a time when the Trump administration’s bellicose posturing is intent on provoking conflict in a host of potential hotspots.

Jeannette Rankin considered her vote against U.S. entry into World War I her life’s most gratifying moment. Were that we had more politicians with her moral integrity. That would be something to sing about.