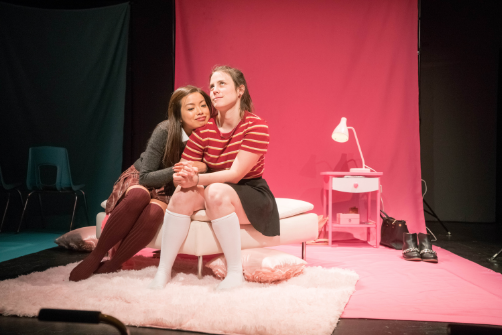 BOTTOM LINE: Embroiled in a twisted and violent friendship, a pair of teen girls have a plan to run away.

Minnie and Kora become incredibly successful at scamming adult men into giving them money in exchange for promised sexual acts the girls never deliver on, or in return for not falsely accusing them of bad acts. Then, in order to make a clean break from their families, the girls decide to stage their own deaths: “We’re gonna splatter our blood all over the loading dock behind the closed-down Home Depot, and we’re gonna disappear,” confides Minnie (Olivia Levine) to her new friend Megan (Arielle Goldman). Minnie realizes how insane this is, but she’s in too deep by this time, trapped by every decision she’s made up to this point.

Minnie and Kora’s friendship is fascinating: It is violent, obsessive, cruel, codependent and strange. From beginning to end, the two girls engage in vicious physical and verbal abuse with one another. Though it isn’t exactly kinky or entertaining, they derive pleasure from beating each other up. In particular, Kora can’t get enough of riling Minnie up and making herself the victim of Minnie’s outbursts. By baring their ugly and evil “true” selves to one another, the girls are guaranteed a loyal and forever friend, in a sort of mutually assured destruction. Third-wheel Megan isn't popular, has a tragic past, and didn’t asked to be put in the middle of this sordid friendship. She makes YouTube dance videos and knows she’s not talented, but it’s her release. In a delightful scene, we enter into her mind and see her dancing the way she sees herself. Goldman’s performance is striking; she brings benevolence and humanity to the stage with effortlessness and generosity.

This is an uncomfortable play to stage in the era of "Believe women," when trying to dismantle myths around wrongful accusations; it’s an especially precarious choice just two months after Dr. Christine Blasey Ford’s testimony before the Senate. Minnie and Kora embody a "Lolita" trope that, though it proves effective in their goal to secure their travel funds, seems at odds with the overall realism of the production. Very little doubt ever creeps into their interactions, which leaves the audience wondering: Who are these girls? It is unclear why the urge to run away is so overpowering for these two that they would treat strangers with such relentless cruelty. Though certain references and a short scene allude to Kora’s neglectful father, the questions remain unanswered.

Honors Students is a difficult play. It is realistic in its language and staging, which makes its characters’ “bad” behavior that much more impactful. Director Leta Tremblay is a fitting match to MacCarthy’s ferocious text; Claire DeLiso's set is imaginative and transportive; and Cha See's lighting design makes fantastic use of the space and enhances the piece's starkness. I left feeling a little brutalized, which I didn’t necessarily dislike. This play, like these girls, has force and is unapologetic.

(Honors Students plays at Wild Project, 195 East 3rd Street, through November 11, 2018. The running time is 100 minutes without an intermission. Remaining performances are Saturday at 2 and 8 and Sunday at 2. Tickets are $20 and are available at thewildproject.com.)