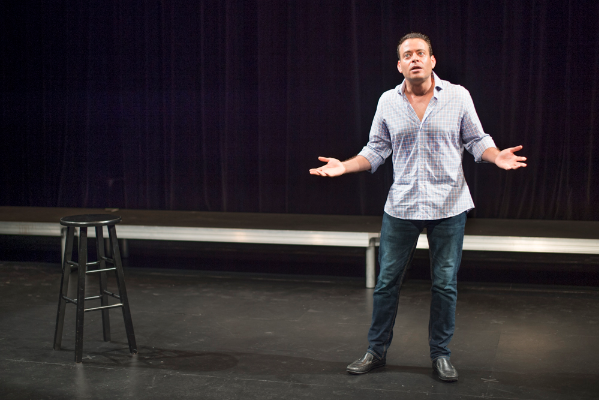 BOTTOM LINE: A passionate, provocative, and timely look at the Nazi Holocaust and its implications for contemporary Jews, anti-racist activists, and the state of Israel.

As audience members leave the Theater at the 14th Street Y, an usher hands them a leaflet: “Hoaxocaust! is a work of fiction satirizing actual arguments from the literature and commentary of Arthur Betz, David Irving, Robert Faurisson, and The Protocols of the Elders of Zion.”

The flyer is a stark reminder that more than a few Neo-Nazis have taken the satirical play at face value, arguing that it affirms the Holocaust as a fabrication, an illusion concocted to buttress support for the creation of Israel. These Holocaust deniers contend that claims about the extermination of six million Jews and hundreds of thousands of disabled people, homosexuals, Anarchists, Communists, Socialists, Roma, and Jehovah's Witnesses are all bald-faced lies.

Playwright Barry Levey interrogates these beliefs using considerable humor, wit, and sass. He mocks, but it’s clear that he also listens, and closely. The tightly written play—updated to include the latest antics of Putin, Trump, Jared Kushner, and other political players—reminds us that six members of the alt-Right are currently running for US office. One, an ultraconservative white supremacist named Kris Kobach, is the GOP candidate for Kansas governor. The ACLU calls him a “grave threat to civil liberties.”

Of course this is terrifying, and Levey is appropriately scared. Nonetheless, while he underscores the current danger posed by white nationalists, anti-Semites, homophobes, and misogynists, he doesn’t let the Jewish diaspora—he self-defines as a queer secular Jew—off the hook. In fact, some of his most searing questions are directed at the Jewish community. When his mother declares that “no one has ever had it worse than the Jews” and tells her son that Israel must always be defended, her words cause Levey to do some soul searching. Does the fact of the Holocaust cast Jews as perpetual victims? Does the desire for security give those running the government of Israel the right to oppress anyone deemed a threat? What about intermarriage? Is his mom right when she suggests that Jews have a moral obligation to reproduce and keep the faith? Is failure to do this finishing off what Hitler started?

They’re hard questions and to his credit, Levey does not offer flippant answers. Standing on a bare stage, without a single prop, he paces back and forth, periodically sitting on a small wooden stool. His tone is intimate, evocative, and often personal. He’s thoughtful, and despite many humorous asides and quips, the reality that Holocaust denial and anti-Semitism can co-exist with Palestinian oppression leads the play to a gut-churning denouement. It’s powerful.

As part of the 14th Street Y’s War & Peace theater series, the provocative Hoaxocaust! does not just raise a raft of vexing political issues. It also asks what it means to have both a personal and a tribal identity. “The Holocaust makes my family feel Jewish,” Levey admits. Still, he is aware that as memories of Third Reich atrocities begin to fade, a meaningful reference point may be lost. As he points out, a survey released in April revealed that 22 percent of American millennials told interviewers they had never heard of the Holocaust, and two-thirds could not identify Auschwitz as a concentration camp. Needless to say, this could bode badly for the world, for if history is not to repeat, “Never Again” has to be more than a slogan. The memory of millions of annihilated souls depends on it.