This production has closed, but for more information visit drillingcompany.org

By William Shakespeare; Directed by Karla Hendrick
Produced by The Drilling Company and Shakespeare in the Parking Lot 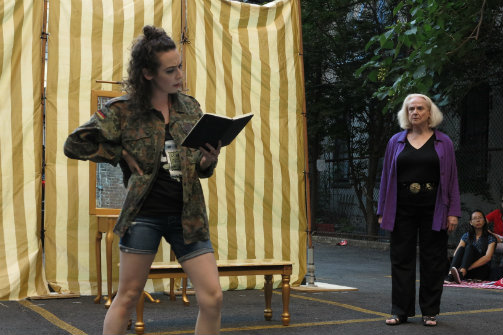 Hamlet very nearly didn’t make it to the parking lot at all. Bureaucratic backstage drama almost shut down The Drilling Company’s 24th outdoor Shakespeare season before the company reached a last-minute resolution with the Clemente, whose concrete has provided a home for Shakespeare in the Parking Lot since 2015. And even if that delay cost the show the first half of its two-week run, it’s still a victory to see this lively Hamlet, alive and well and playing to a packed audience for free on the Lower East Side.

Jane Bradley stars in the title role, playing Hamlet as a woman on leave from her all-female liberal arts college (“Go not back to Holyoke,” entreats Queen Gertrude in one of the very few textual emendations in this contemporary re-setting). Bradley smoothly navigates the verse and her Hamlet is whip-smart and snarky, but there’s not enough sense of high stakes throughout. The puzzling re-location of the “To be or not to be” soliloquy, in which Hamlet contemplates suicide, to the back end of the play contributes to constructing Hamlet’s early nonchalance—it’s rather jarring when this sardonic introvert suddenly holds her mother at gunpoint.

Curiously, the debut of the re-gendered Princess Hamlet makes relatively little impact on the play itself. Yes, Hamlet and Ophelia (Gracie Winchester) are now a same-sex couple, but that scarcely registers (even if Rosencrantz’s laughter at Hamlet’s admission that “Man delights not me” takes on new, crisper meaning). Hamlet’s misogynist mistreatment of Ophelia seems entirely part of the princess’ feigned madness, and, by trimming away most of the political subplots, director Karla Hendrick narrows the opportunities for commentary on gendered power. Maybe it’s not the production’s intended takeaway, but it’s a worthwhile discovery that a female Hamlet does not feel like a radical revision: Hamlet, after all, burns most brightly not in conversation with others but in her self-churning (and, dare I say, universal) soliloquies on grief and mortality.

It’s actually the other gender flips that open up new avenues. The superb Elowyn Castle radiates with contagious clarity and specificity as the King’s advisor Polonia (formerly Polonius): her scene partners’ performances seem to sharpen whenever she’s onstage. What usually reads and plays as Polonius’ inappropriate invasion of his daughter Ophelia’s personal life here becomes the tender attempts of a well-meaning single mother to prevent her daughter from being wounded in love as she herself has been. There’s a playful ease and wryness in her scene with Ophelia and son Laertes (John Caliendo) that suggests she knows her own faults better than most Poloniuses I’ve seen, and she imbues the character’s infamous long-windedness with not only humor but also an unexpected logic and warmth.

Hendrick also cleverly re-imagines Hamlet’s friends Rosencrantz and Guildenstern (the winning Aly Byatt and Lulu Fairclough-Stewart) as a pair of sorority sisters who squeal with Hamlet upon reuniting and braid each other’s hair during the play-within-a-play. Their scenes with Hamlet, who is increasingly embittered at her classmates’ inauthenticity, offer a pointed contrast to the solider sisterhood she shares with Horatio (an endearingly earnest Ayo Oneké Cummings).

Following more traditional casting, Robert Arcaro portrays the usurping King Claudius as a tyrant who puts on the jovial persona of a goofy uncle—Hamlet’s assertion that “one may smile, and smile, and be a villain” has seldom felt more apropos. There’s a sense that Una Clancy’s Gertrude has never known how to parent her cerebral, sarcastic daughter, but there’s real unspoken affection when she bids the England-bound Hamlet farewell. Kendra Lee Oberhauser as the Player Queen and Bill Green as a genuinely eerie Ghost, padding about the parking lot in a trench coat and hospital gown, also stand out in their brief appearances.

Hendrick’s judicious cut makes for an intermission-less sprint that finds success in the rapid tempo of the text and the swift movement between scenes. Even if this Hamlet is only intermittently eye-opening, it’s certainly never boring. That’s helped, no doubt, by the constant surprises that the unique setting offers: passing car radios blasted occasional musical accompaniment and new audience members wandered over from the street. The Shakespeare is nimbly staged, but it’s the parking lot that’s totally delightful.

(Hamlet played at The Clemente Soto Veléz Cultural and Educational Center, 114 Norfolk Street, through July 28, 2018. The running time was 2 hours 20 minutes with no intermission. Performances were Tuesdays through Saturdays at 6:30. Tickets were free. For more information visit shakespeareintheparkinglot.com and drillingcompany.org.)