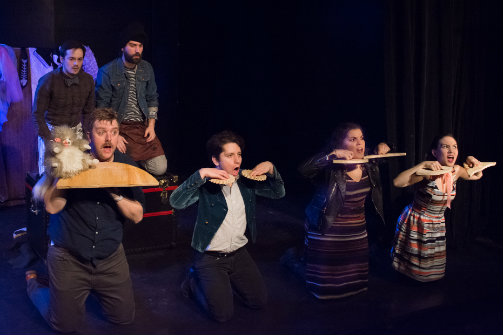 BOTTOM LINE: Inspired by true events, what starts as two printing apprentices’ dreams of moving up in the world ends in a bloody massacre…of cats!

If a story about two French printing apprentices who convince their neighbors that the neighborhood cats are actually demons and must be executed en masse sounds too absurd to be even remotely true, then you’d be right about one thing. The story is utterly absurd, but this new musical by Greg Moss and Casey O’Neil is inspired by true events. There was indeed a mass execution of cats in Paris in 1730, and as the cast of The Great Cat Massacre warns at the top of the show, “You may not want to stay if killing kittens doesn’t make you grin.”

For those who delight in things both macabre and tongue-in-cheek, then The Great Cat Massacre may have the gratuitous laughs and violence you're looking for. Printing apprentices Jerome (Matt Dunivan) and Léveillé (Aaron Riesebeck) are miserable. Their work conditions are lousy, they are constantly berated by the master and journeymen, and they are overlooked by the company’s owner Monsieur Vincent (Dewey Caddell) and his wife Madame Avanelle Vincent (Kimberly Immanuel). Even the Madame’s cat Bonbon (also played by Dewey Caddell) is fed better food and treated with respect.

Léveillé despises Bonbon and doesn’t hide his burning desire to violently put an end to Bonbon’s cushy life. Meanwhile, Jerome dreams of one day running the company. When they hear that Madame Avanelle has convinced her husband to name Bonbon the inheritor of the company, the two apprentices lose themselves in fury. They hatch a plan to murder Bonbon, but what starts as a simple mission spins out of control to disastrous results.

Along the way we are introduced to some of Paris’ other strange characters. Madame Avanelle's accomplice in her devious plans is the nervous and eccentric Pierre (Adam Muñoz) who knows in his heart he’s actually a cat himself. The show’s narrator (Lauren Baez) also plays the local sage who stokes the neighbors’ fears by recalling stories of how other cities combated their own demonic cats.

The cast excellently portrays this musical’s campy ambiance. They maintain a quick-witted pace and energy from start to finish, and you can’t help but have fun with them. I also must applaud the design team for creating a cohesive world for The Great Cat Massacre. It is especially fun to find the tiny cat paw details on Elivia Bovenzi’s costumes, and her dress for Madame Vincent is exquisite!

Moss and O’Neil’s punchy music and endless puns make for an entertaining look at the kinds of absurd stories people will believe. When Jerome and Léveillé inadvertently cause all of the neighborhood cats to meow in the middle of the night, for several nights in a row, the locals convince themselves that the noise is causing some of the neighbors to become gay. This story also shows just how wide the rift was between the French working class and the bourgeois, a conflict which feels familiar in today’s socio-political climate. That said, sometimes the show’s more serious themes get lost in the puns and absurdist humor; indeed, the bleak ending feels like a different musical all together. All in all, The Great Cat Massacre is a bloody good time and I’ll be interested to see where it goes next.