Created by the Ensemble; Directed by Clare Stopford
Produced by the Baxter Theatre Center in Cape Town 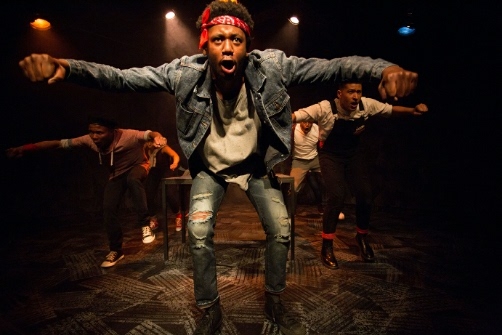 The cast of The Fall.

BOTTOM LINE: The student is the future in this powerful piece of social justice theatre written for the #RhodesMustFall movement.

Harmony, despite its definition, is rarely about speaking in unison or absolute agreement. Indeed, it has more to do with listening, and allowing space for different voices to co-exist. And harmony is our first impression in The Fall: a succession of voices, songs, and rhythms, spinning out of a collective consciousness. Anyone who has attended a recent protest may well understand this experience of being within a larger voice. And if not, The Fall can certainly bring you into that state of mind. Its brutal honesty holds up a mirror that both reflects and amplifies its source.

This exceedingly well-made devised piece revolves around the events during and after the Rhodes Must Fall movement in South Africa, which was started almost exactly three years ago by a group of students at the University of Cape Town. Originally a protest against the statue of Cecil Rhodes on the UCT campus, the movement quickly grew into a nationwide fight to decolonize education in South Africa. The Fall follows the progression of this movement with a dynamic and poetic narrative, but it also grapples with issues within activist groups. It leads to a powerful reveal of the complexity of the student organization’s struggle against the government, and also illustrates their quest to work together in spite of their misunderstandings and disagreements.

In true devised theatre nature, The Fall shifts between realistic scenes and more abstract sequences of movement and vocalization, but it follows a chronological narrative. We meet the student activists in their meeting room. They come from a wide range of backgrounds, but are bound together by a common belief and a shared goal. Years after apartheid, we learn that the education system in South Africa is still very much westernized: African literature is marginalized in a Eurocentric syllabus, and a statue of Cecil Rhodes stands on the UCT campus. Interestingly, the progression of the student movement is marked by one constant: their disagreements with each other. Although it might seem surprising, with the romantic notion of the “all for one and one for all” attitudes of activist groups, the need to negotiate difference is profoundly truthful. Whether financially privileged or poor, man or woman, the activists must learn to work together in order to achieve what’s most urgent.

A transplant from the Edinburgh Fringe Festival, where the company received much recognition, the production at St. Ann's keeps the festival show aesthetic. The minimal set is simply three card tables that are shaped into various spaces. And the ensemble's use of vocalization is especially noteworthy. Not only does it introduce a unifying cultural framework, but it also becomes a breathtaking way to communicate with the audience. Though experimental in nature, the piece never ventures into obscurity, and whether or not you’re familiar with the history of the Rhodes Must Fall movement, you’ll find clarity after the 70-minute experience.

The Fall also succeeds in presenting vital concepts about decolonialization (for example, what it means to "Westernize," or shorten the name of a culture) in a way that is not in the least pedantic; rather, these theories are shown as being powered by the blood and bile of an ensemble of actor/activists who's lived through a transformative experience. Just as importantly, The Fall shows that respect is the first step towards democracy, and that, no matter one's differences with fellow activists, it is crucial to take a stand. And although specifically about the student movement in Cape Town, The Fall is urgently relevant in the U.S. on the heels of the National School Walkout in protest of gun violence, which started with a spark similarly lit by students (including many theatre kids) in Parkland, Florida.

Some say that theatre that reinforces our worldviews is entertainment, whereas theatre that disrupt or challenges them is art. In this case, the value of The Fall lies in its ability to expand our existing understanding of activism, and the challenges we face as people who are involved in the arts. The symbolic act of taking down a statue was the first spark that led to a wildfire of awakening that spread across the country, and that is the value of activism. Over the years seeing productions at St. Ann’s Warehouse, The Fall has attracted by far (from what I can tell) the most diverse audiences. I hope it marks the beginning of a new era of programming there.

The Fall is created by the ensemble of the Baxter Theatre Centre. Directed by Clare Stopford. Set Design by Patrick Curtis. Costume Design by Marisa Steenkamp. Lighting Design by Luyanda Somkhence.