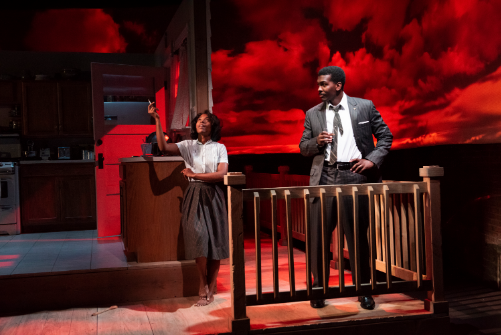 It’s 1963, a haunting era of racial segregation for African-Americans, especially in the south. Olivia (DeWanda Wise) goes to her porch to take in some fresh air, and the sky is on fire. Inspired to compose a letter to someone—maybe to God herself?—but also traumatized by bombs that go off inside her head, she goes back inside to rest. Her cheery husband Charles (Khris Davis) returns home and can’t wait to embrace her in. But Olivia is distant. In fact, there is much that is complicating her emotions at that moment. These things, and more, are revealed over the two days that make up Donja J. Love's compact 90-minute play Fireflies, the second part of Love's trilogy that began with Sugar in Our Wounds.

Charles is a prominent, sought-after preacher who has just given a speech after four young girls were killed in a church bombing. The next day, he is scheduled to visit an adolescent in jail who was accused of touching a white woman. But if Charles is the face of a movement speaking out for his people, his stay-at-home wife Olivia is his muse. And as it turns out, she is more than just a muse—she actually writes all of his speeches. Olivia, on the other hand, is emotionally conflicted. She displays post-traumatic symptoms that suggest a difficult past, and her mysterious letter writing suggests a possible secret liaison. She is also pregnant, and extremely unhappy.

At first I thought Fireflies would be about a young struggling couple during a difficult time in history. As the plot unfolds, it turns into a play about a specific figure in American history—reminiscent of the recent FBI documents reveal on Martin Luther King. Although rigorously directed by Saheem Ali, there are a few too many plot twists to make it credible or resonate more broadly. To add to this, the artificially neat, bright kitchen and hyper-dramatized flashes of explosive projections don’t add nuance to the story, even while they are carefully prepared by set designer Arnulfo Maldonado and projectionist Alex Basco Koch. The costume design by Dede Ayite is down to earth and fitting. As for the actors, both deliver their characters with intensity and flair.

Fireflies touches on many current hot topics: Black Lives Matter, queer love, abortion, infidelity, and post-traumatic trauma, any of which could be intriguing on its own. Yet while Love touches on these topics as the plot escalates to multiple moments of boiling climax, these themes are not further explored. While Olivia's inner world shatters they explode one on top of another—almost literally, given the projections of explosion that flash on the backdrop. When Charles’ infidelity is revealed, somehow Olivia’s own emotional turmoil becomes a bigger problem, preventing us from seeing the development of this infidelity and its real impact on a relationship. Furthermore, at one point we find out that the young boy that Charles is supposed to visit has been mutilated and killed while in jail. Not for the first time, Love builds our intrigue to know more about that development, but then immediately drops the topic for the next sensational reveal. It may be that Love is trying to tackle too much here—perhaps a sharper focus from the playwright would help clarify our own.

(Fireflies plays at the Atlantic Theater Company, 336 West 20th Street, through November 11, 2018. The running time is 90 minutes with no intermission. Performances are Tuesdays at 7; Wednesdays at 2 and 8; Thursdays and Fridays at 8; Saturdays at 2 and 8; and Sundays at 2. Tickets are $50 - $65 ($25 available to some performances) and are available at atlantictheater.org.)

The cast is Khris Davis and DeWanda Wise.