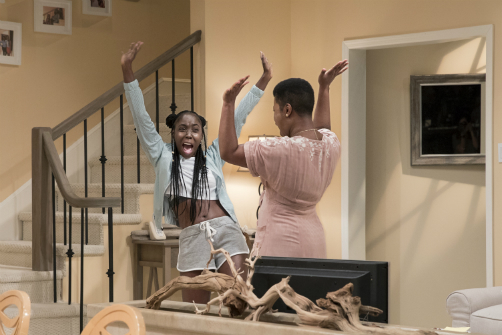 BOTTOM LINE: Initially disguised as a family drama, Fairview is a meta-theatrical experience that asks some tough questions on behalf of people of color and demands that audience members engage in self-examination.

Jackie Sibblies Drury’s meta-theatrical social experiment of a play starts off with perhaps the most cliché of conventions: a family dinner, for Grandma’s birthday. We meet the stressed-out Beverly (Heather Alicia Simms) who needs everything to be just right; we meet her slightly goofy husband Dayton (Charles Browning) who is not especially helpful around the house. The house itself, well, it’s decorated to the nines in pastel and beige (in Mimi Lien’s thoughtful set), showing off the couple’s status: an exaggerated bourgeois getup down to the living room centerpiece that’s an artsy tree root. And the couple is well dressed and well spoken, so I start to settle in for a typical dysfunctional family drama. I thought the only subversive element in this production would be the fact that at least we’re seeing a black family in a middle-class setting.

But the actors speak in such a stylized way, perhaps a little too stylized, that you think maybe there’s more to it. So, as trash gets stuffed into the cracks between the fancy furniture, and Sly & the Family Stone’s "Family Affair" wafts out of the stereo that seems to have a mind of its own, interrupting Beverly’s dinner-prepping soundtrack like a ghostly reminder, director Sarah Bensen starts to hint that Fairview is in fact more than what it seems.

The family drama carries on unfolding, though it becomes increasingly self-aware. The drama queen apparent, Jasmine (Roslyn Ruff, with excellent comedic timing), points out during a meta-moment how underneath the façade, everyone is full is drama. However, it’s when Beverly’s daughter Keisha (MaYaa Boateng) enters that the play breaks the fourth wall. The overachieving teen is a strange and comically hyper presence as a student-athlete type that we’ve all seen in TV shows, directly addressing the audience in absolute sincerity about the unease she feels in her social role.

Realism is thrown out completely in the second half of the play, which is an exact repetition of the actions we’ve just seen, overdubbed with the voices of a group of people talking about race. Their discussion gradually gets heated, and ultimately offensive. Every single racial misconception, presumably from a white person’s point of view, gets elaborated over a frankly irritating conversation that will make you start to itch with discomfort, especially sitting amongst a predominantly white audience.

Fairview is a hard show to watch. It exposes the ugliness of our ignorance when we talk about race, and how race is represented in the arts and entertainment. I wasn’t sure whom this play is for until the very end, when everyone is in for a revelation, and suddenly I was in awe of just how clever Fairview is, and how much the playwright and the director understand the state of the art. Fairview is a truly important theatrical achievement—not only a well-crafted script, dynamically directed and impressively designed, but a testament made on behalf of all people of color. It demands that members of the white majority turn their gaze upon themselves.