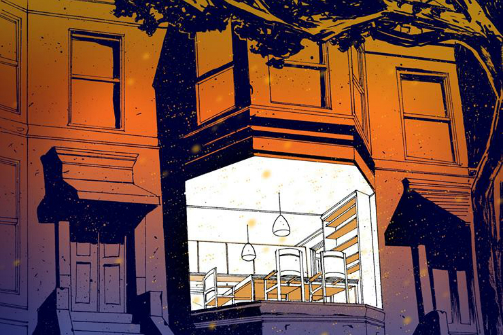 BOTTOM LINE: In this comedy about life in New York City, a married couple shows a broke obnoxious actress their spare bedroom for rent.

Mike Lemme's play 50th & 4th is a play about community—those families we choose. Sweet and spunky couple Rick (Emil Ferzola) and Sue (Gloria Lamoureux), married for thirty years, rent out their spare room, and are the kind of people that are still in touch with their past tenants—there's a group chat, and one is even finding Sue a job. Now that their room is empty again, Taylor (Kirsten Dwyer) shows up to take a look. First she has to make sure Rick and Sue are not Craigslist killers. Yet even if they were, this $450 room is all Taylor can afford, seeing as how she just spent ten grand to rent a theatre for her one-woman show.

We come to learn what each of these characters holds near and dear, as well as what troubles them. For Taylor, the struggling New York actress, the lack of a relationship with her mom is a driving force. Rick, laid off from his factory job, is fueled by his love for New York City and for his wife Sue. Sue is equally in love with her husband, but is ready to leave New York. San Francisco calls to her, but convincing Rick to move will not be an easy task.

Even in the sometimes frustrating festival setting, sitting in a broken chair watching flubbed lines, the potential of 50th & 4th is evident. Lemme's concept—a fantastic couple renting to an obnoxious younger woman who does not know herself—is a great set-up for character development, since it inspires Sue and Rick to face their frustrations. Lemme also includes some fantastic one-liners. And I commend director Tara Cioletti for her hard work. Festivals are not easy and it's clear her work assembling the connective tissue is in large part responsible for making 50th & 4th the fun experience it is.

But the best part of this show is Emil Ferzola, who brings the quirky Rick to life, alternating between joking and being serious without the other characters, or even the audience, always knowing if he is just pulling their leg. And it's Ferzola's chemistry with Lamoureux that makes Rick and Sue so endearing. According to his bio Ferzola has only been acting a short time, but his natural ability kept me rooting for Rick the entire time—I am confident he has a future in this industry.

50th & 4th is by Mike Lemme. Directed by Tara Cioletti.

The cast is Gloria Lamoureux, Kirsten Dwyer, and Emil Ferzola.