By James Clements; Directed by Wednesday Derrico
Produced by What Will the Neighbors Say? 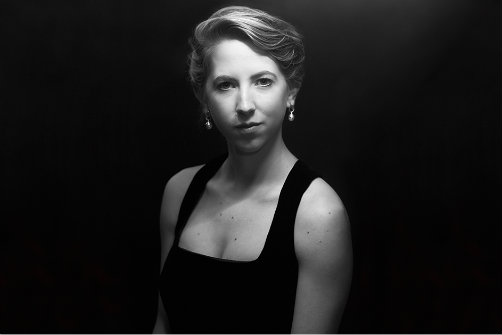 BOTTOM LINE: The Diana Tapes recounts the suspenseful months during which Princess Diana and Andrew Morton collaborated to expose her true experience in the royal household.

Anglophiles, rejoice! The People’s Princess is reincarnated at the HERE Arts Center’s Sublet Series in James Clements' The Diana Tapes. But don’t come expecting a fairytale depiction of Diana the Princess of Wales’ life: This Diana (Ana Cristina Schuler) first appears in an oversized raincoat and shorts, badly singing Michael Jackson’s “Billie Jean” in her private quarters. Over the next seventy minutes, we see the princess and the men around her construct her image and narrative such that she finally earns her infamous little black "revenge dress," as she spites Prince Charles and asserts her independent voice in the royal family.

In an interview for the 2016 Edinburgh Fringe, James Clements, who wrote and also acts in the play, explains that he chose Diana and her influence on British culture as the subject of his undergraduate history thesis. Clements was fascinated with Diana: Her True Story—In Her Own Words, the 1992 exposé by Andrew Morton that revealed Diana’s unhappy married life, her bulimia and suicide attempts, and her miserable relationship with the royal family. Diana had recorded her side of the story on cassette tapes that were surreptitiously delivered to Andrew (played by Clements), a tabloid writer given license to Diana’s story only if he could protect the princess’ deniability as the source. Clements explained that he found this chapter of Diana’s life the "most theatrical," and that it helps "explain why she was so important to people." As portrayed here, getting the book to publication is an elaborate scheme, involving intricate security measures put in place by Diana’s friend and direct interviewer, Dr. James Colthurst (endearingly played by Jorge Morales Picó), and Andrew’s publisher Michael O’Mara (played by Sam Hood Adrain as a brash American money-man).

Under the direction of Wednesday Derrico, the one-act makes for an enjoyable evening. Obviously it takes skill to recreate Diana, the international icon, and between Schuler’s practiced gestures and expressions, and designer Madeline Wall’s recreations of Diana’s looks (most notably her dark eyeliner, her engagement ring, and her pearl choker/"revenge dress" look), the ensemble pulls it off in the end. Wall also invents some clever solutions for the play’s bare-bones set, moving swiftly between Diana’s quarters, Andrew’s office, and a coffee shop where James and Andrew meet to exchange tapes. (I particularly enjoyed one prop trick towards the end that turned a cube into a working TV set.) While I’d be curious to see a more elaborate version of the production that doesn’t require the four actors to orchestrate each set change, the aesthetic does allow for quick transitions in a world where the ground is rapidly changing below our characters’ feet.

The inherent structural challenge with trying to make a thriller out of a history play is that we already know how the story ends: Andrew Morton’s book does ultimately get published in 1992, the world is introduced to a previously unseen side of the British monarchy, and decades after Diana’s death it finally comes out that Diana was in fact the source of the material. Perhaps, then, the play is best suited for young adults (in their 20s and 30s) who are too young to remember these events and can view the suspenseful circumstances around the book publication as though for the first time. Furthermore, the production coincides perfectly with the recent royal wedding between Diana’s son, Prince Harry, and American actress Meghan Markle, a time when our press and culture reignites its casual long-distance romance with the British monarchy. Beyond those factors, I’m hesitant to say that the play adds much new to the conversation about Princess Di. But perhaps for a true Anglophile, the issue of novelty is less pressing than the chance to relive history.