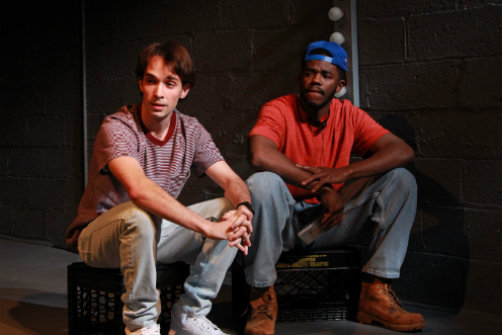 BOTTOM LINE: Short but powerful, Dutch Masters recreates a pivotal moment in the life of New York City as experienced by two strangers on the subway.

Dutch Masters, the new play by Greg Keller, is a snapshot of a specific moment in New York history—one whose legacy is still with us today. It’s also something of a theatrical puzzle, spanning a few hours in the lives of Eric (Ian Duff) and Steve (Jake Horowitz), two young men who are scarcely out of high school. They meet on an uptown D train on a summer afternoon. Eric is black, in baggy jeans and a ball cap; Steve is white, his outfit nondescript, with the exception of his immaculate white kicks.

It’s 1992, just a year after the infamous race riot in Crown Heights, Brooklyn; a year later, David Dinkins, the city’s first black mayor, will lose his reelection bid to Rudy Giuliani. This is the atmosphere in which Eric strikes up a conversation with Steve, who isn’t sure what to make of this stranger’s overtures—they’re superficially friendly but fundamentally hostile. What follows is 70 minutes of acute dramatic tension, in which both Steve and the audience are constantly trying to guess what’s coming next. As you might suspect, racial anxieties are at the heart of Steve’s dilemma. On one hand, he’s under no obligation to continue interacting with a guy he just met on the subway; on the other, what will happen if he tries to get away? Or is the menace he perceives coming from Eric just a paranoid illusion born of his own racism?

To say much more about Dutch Masters’ second half would spoil its surprises, but when the plot takes a stunning turn, you may ask yourself how you failed to see it coming. Under the direction of actor André Holland (seen on Broadway last season in Jitney and making his directorial debut here), the impressive young cast navigates the play’s shifts and ambiguities beautifully. Keller casually drops cultural references from the 1980s and early ‘90s (many involving notorious incidents of racial violence) that most longtime New Yorkers are likely to recognize; those who don’t may feel momentarily confused, but ultimately it’s clear that the city these kids have grown up in is one in which different racial groups are intimately bonded in certain ways and worlds apart in others.

Keller’s script lets us down in the final moments, the action coming to an abrupt, anticlimactic stop. The situation it depicts may, indeed, have no neat resolution, but these characters deserve a better ending. It’s a testament to how well the rest of Dutch Masters works that its disappointing conclusion is so jarring; overall, it’s a ride worth taking.

Dutch Masters is by Greg Keller. Directed by André Holland. Set Design is by Jason Simms. Costume Design is by Ntokozo Kunene. Lighting Design is by Xavier Pierce. Sound Design is by Daniel Kluger. Stage Manager is Arielle Goldstein.

The cast is Ian Duff and Jake Horowitz.